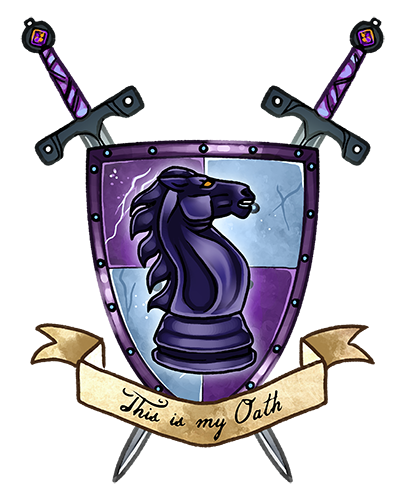 Casa di Cavalieri is a Luperci-dominant pack that lays claim to the northeastern half of Whisper Beach. The heart of Casa is Fort Kingsbury, where all members reside in their quiet cottages or in private rooms in the gallant Courthouse. Kingsbury is protected by a large stone wall, which provides a secluded, undisturbed mood unique to the Knight pack. Casa di Cavalieri contains rich forests, alluring old human towns, and a valuable claim to the Bay of Fundy.

The pack was founded by Jazper Rhiannon-Knight and Anann Kelevra after the course of the AniWaya Conflict to remedy the need for a central group of protectors. The founders believed that by creating a group of skilled fighters, they could deter and potentially prevent the devastation caused by future threats. Consequentially, Casa's culture is centrally militaristic, and members are expected to train regularly and be able to fight effectively in battle.

Casa's ranking system is made up of five tiers (excluding youth and leadership), ranging from general members to knights to an elite council consisting of five skilled representatives. The pack is charged by two leaders of equal power, the Sole/Sola and Lune/Luna. Cavaliers can not advance past mid-rank unless they have combat abilities. Casa is a place of morals and they seek to do the right, but they are not above killing to keep the peace and serve justice. Education and family are also building blocks of the pack's structure.

Shortly after a raid on Crimson Dreams by new Aniwayan leadership (AniWaya Conflict) Jazper Rhiannon-Knight traveled to Cour des Miracles to seek help from his friend Anann Kelevra. During this conversation they discussed the need for a large group, or pack, which could be called on in such a crisis. Jazper quickly decided that he would begin to recruit for such a pack and encouraged Anann to consider joining him in leadership. .[1] Anatoliy Russo also joins the conversation. After many weeks of individual thought and searching for pack land Anann and Jazper made their way together to Whisper Beach. During the scouting trip the pair ran across Rurik Ivonov, Dixie-May Jackson and her friend Wayne McCoy. Dixie-May, having lived in the area for a good amount of time, suggested a place for the pack to settle.[2] Dixie, Wayne and Rurik remained at the Fort, which they dubbed Kingsbury, and continued to make the Courthouse livable [3]. After a week had passed Jazper returned to the Fort and called all potential members to begin marking the territory [4], thus opening Casa di Cavalieri officially.

Casa di Cavalieri was originally founded with the intent that the group would be protectors of the peace, and that ideal is the foundation of Casa's militaristic system. All members are required to train on a regular basis, therefore spars and weaponry are commonplace within the pack. Casa has an armory made available to all members of the pack, and it is encouraged that Cavaliers become skilled with a variety of different techniques and weapons to use in battle. War-horses are an essential element to Casa's battle-ready population. Horses are bred selectively to create the best of the best and trained from a very young age to be ridden into war and even assist and guard their riders in combat. Every Cavalier ranked as a knight or higher is expected to be able to defend themselves no matter their specialization, effectively making the near entirety of Casa a battle-ready army.

Despite their militaristic nature, Casa's culture also respects the necessity for education and a wide variety of skill. Once old enough to walk and talk children are assigned a mentor to teach them the ways of Casa as well as assist them in training and education. Family is held in high respect within the pack, and parents are expected to rear their children with kindness as well as a firm hand. Children are essential to the Cavaliers and seen as future leaders; they are taught to be not only physically prepared for every possibility, but mentally as well. Skills are commodities within Casa, and members are encouraged to broaden their knowledge to expand past weapon-wielding and battle-readiness. Tailors, scholars, blacksmith, carpenters, hunters, and a variety of other skilled Luperci are welcome and valued within the community of Casa.

Casa di Cavalieri was founded with an intent to protect the weak and fight for peace, and that stands strong still within the pack. Cavaliers are expected to be honorable men and women and do what is right to achieve justice. Casa has since evolved from the original ideal of founders such as Jazper, and are no longer afraid to kill should it be necessary to hold the peace and protect what is necessary. This change in Casa can be seen most prominently throughout both Syndicate Conflicts, when the pack chose to execute a pair of trespassers rather than hold them or release them [M] [5] and then in 2017 wiped out the entirety of the group [M] [6]. Consequentially, Casa has come to appear more formidable and capable than ever before.