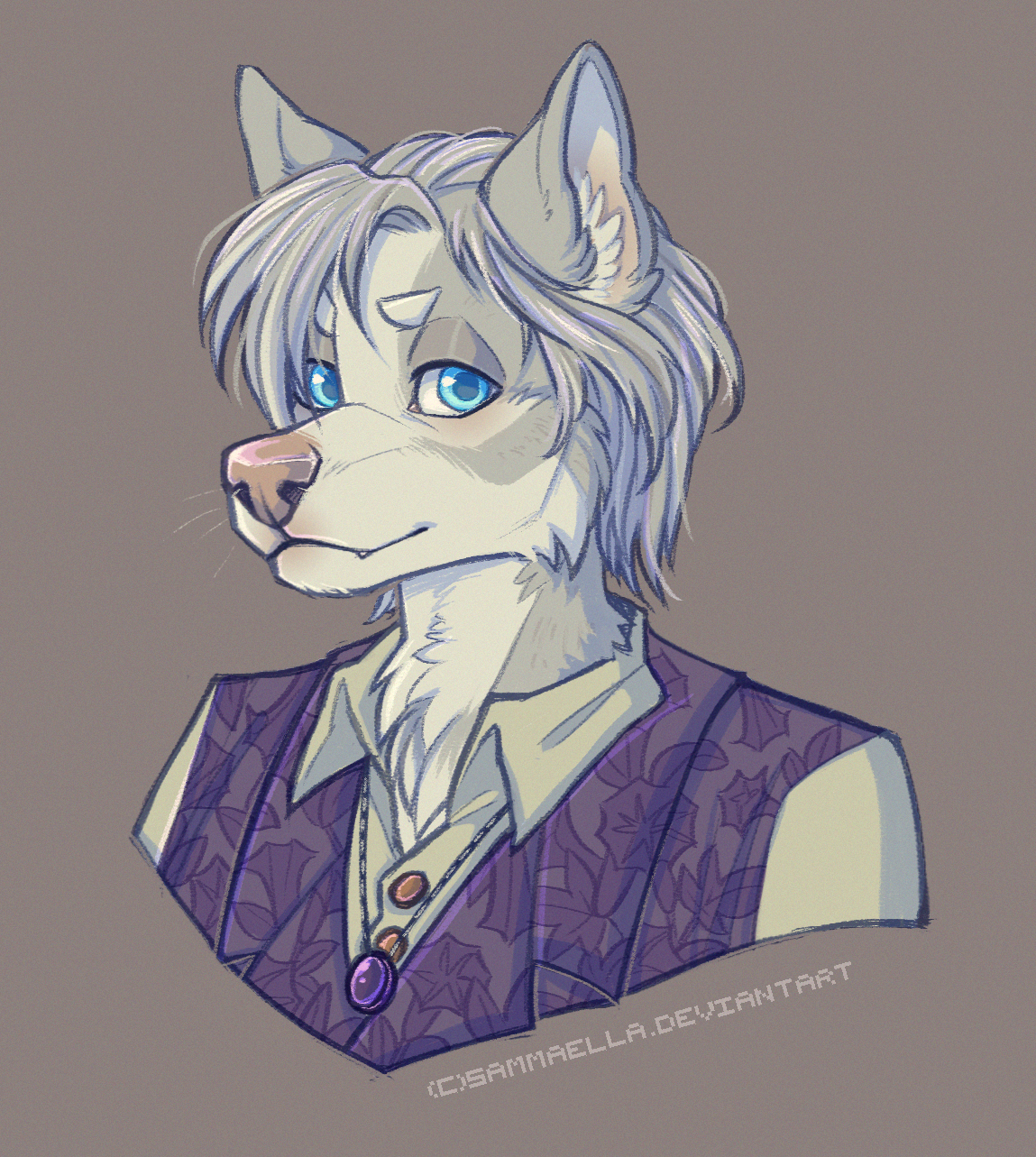 Originating from the faraway British Isles and born into a life of privilege as an aristocrat's son, Everett was expected to become physically strong, emotionally manipulative and mentally cunning. To his parent's dismay, he entered the world as a runt and was largely ignored by his father for his frail body and gentle disposition. In contrast, his mother doted upon him and honed his talents of empathy and creativity. With a growing sense of dismay for his physical weakness and the isolation he felt from his packmates, he begins to form a plan for his future.

Upon coming of age, Everett fled from his homeland with his friend, Olivia Moreau, to carve out a new life for themselves.

The two arrived in bustling Portland and joined a group of traders and travellers. The journey was seldom smooth, and the group experienced many highs and lows along the way. Everett provided myriad roles as the band's medic, confidante, cook or counsellor on different occasions. Disagreements and scuffles with other traders/loners became increasingly common - one such occasion led to Olivia being threatened.

In the heat of the moment, Everett killed the attacker*, which caused the dead trader's group to flee as they left words of retribution behind. Both suffer in the aftermath of this event and find themselves unable to continue with the group. Without the aid of a pack and with winter drawing near, Everett and Olivia take shelter in the Southern region of 'Souls.

Everett falls ill to the sickness that swept the lands in April 2017. Olivia aids his recovery throughout this ordeal, but when he awakens he discovers she has gone missing. In the wake of his grief, he adopts her family name as his own.

He currently resides in Casa's Portland outpost, where he hopes to strengthen trade links and adopt a teaching role. In YYYY he became the father of Huldr Moreau, Mjrn Moreau and Vivi Moreau with Valdís.

Everett was born and raised into the glitter and prestige of a noble court in London, England. He was the result of his mother’s ambitious social climbing within the pack and his father’s position as a high-ranking lord. The child’s arrival as a runt into the world caused a rift between the couple; his mother, Madeline had birthed two other healthy children in the same litter, and the finger of blame lay upon her. His father, Desmond, wished to keep his reputation intact and disowned the boy; effectively robbing him of any standing within the court as a result. The boy’s sire functioned as an important figure within the pack. His conduct was regarded closely and followed by his peers; his society’s laws dictated that the weak are useless, to be lead and governed by the strong. To ignore this fundamental rule about his son’s weakness would be to invite hostility and banishment upon himself.

Everett’s healthy siblings, Marcus and Elise, grow and thrive with the privileges afforded them whilst Madeline works tirelessly to ensure his survival. This division of care creates a rift between the family. Desmond is pleased with his healthy pups and lavishes attention on them both, a fact that is not lost upon the young male.

For the first several months of his life, he stays close by his mother whilst she teaches him the rudimentary skills that would find him in good standing once he was older. Madeline clung fiercely onto the hope her child could win back his birthright. When she discovered that Desmond's influence had filtered down into Marcus and Elise and that they shunned Eve, she chose to seek help. She enlisted the services of a servant girl to act as her son's companion and bodyguard.

Madeline, with a swell of pride and growing concern she watched as the boy came to realise his low status and rebelled against many of the court's laws. Despite the criticism that rained down upon them, the combined efforts of mother, slave and son were able to weather the storm. The birth-pack's Challenge of the Lions draws near, where yearlings are expected to prove their worth in multiple disciplines. The winners are afforded full family status and protection, whereas the losers were forced into slavery or exile. Both women feared for Everett, but could not admit to their fears in front of him. Unbeknown to Madeline, Everett had other plans and fled with Olivia.

Everett granted his family slave freedom to which she chose to accompany him. The two arrived in bustling Portland and joined a group of roving traders. The journey was seldom smooth, and the group experienced many highs and lows along the way. Everett provided the myriad roles as the band's medic, confidante, cook or counsellor at different occasions. Disagreements and scuffles with another group that Eve would later come to know as Syndicate led to Olivia being threatened.

In the heat of the moment, Everett kills the attacker which caused the dead trader's group to flee; leaving words of retribution in their wake. Both suffer in the aftermath of this event and find themselves unable to continue with the group. Without the aid of a pack and with winter drawing near, Everett and Olivia take shelter in the Southern region of 'Souls.