Krokar was originally founded by Lucille and August Cormier on July 10th, 2014. The group formed when a pair of dog mixes came across coydogs and wolfdogs while looking to trade. They banded together due to their shared fishing heritage, teaching each other new techniques and skills to strengthen their combined knowledge. Krokaran culture revolved heavily around a lifestyle that thrived through fishing, animal husbandry, and trading. The pack society was sociocratic in nature, meaning that the well-being of Krokar was governed by a trusted council under the Captain, who discussed and reasoned together until a final decision was found.

On October 31st, 2018, Krokar was disbanded following an act of arson that left its home destroyed, its animals scattered, and its people leaderless.

Some of the Krokaran have known each other for quite a while. Several members were descended from dogs that belonged to fishermen while others learned to fish by trying different techniques they saw in scavenged books. The group formed when a pair of dog mixes, Aster and Briar came across coydogs Claude and Pepper, and wolfdogs Gavin and Taseko while looking to trade. They banded together due to their shared fishing heritage, teaching each other new techniques and skills to strengthen their combined knowledge.

Eventually, Aster and Briar had a litter of four puppies: Tybalt, Finlay, Gus, and Eliza, increasing their numbers. They, along with the rest of the group's members, passed down their shared knowledge of fishing, trading, and animal husbandry. All pitched in to help the group survive and groom the next generation of Krokar, gaining the huntress Iroquois in the Summertime.

In October 2012, Aster, Briar, and Tybalt were away on a trading trip when the hurricane struck. Tybalt survived while his parents did not. Gus was away as well, exploring a new shoreline when he came across Lucille, whose ship also fell victim to the hurricane. The two eventually made their way back to Gus's family, only to learn of the death of his parents. Despite the loss of two of its members, the group had to move forward, gaining Hazel as a member, and she quickly found her place with the livestock and Gavin's caribou.

They continued trading and fishing until 2014 when their rivers flooded, driving them from their homes and forcing them to resettle elsewhere. Having traveled through the area, Gus and Lucille knew a good spot and the group decided to move there while looking to bolster their numbers. Some have moved already while others are still working on salvaging their old homes to bring those supplies to their new home. And, from there, Krokar began to grow.

The pack enjoyed four years of success, expansion, and relative tranquility until an act of arson by a group of loners left its home destroyed, its animals scattered, and its people leaderless. Krokar disbanded on October 31st, 2018.

The basic culture in Krokar was based around fishing, trade, and animal husbandry. Everyone was expected to pitch in in some manner. If a member was afraid of water, that was okay because there were tasks with trade and the animals that didn't require even getting in a canoe, except possibly for a quick trip across a river. Many members believed in a form of animism, where all creatures and resources deserve respect. There were varying degrees of belief, from basic superstition to belief in a water goddess. Other religions that didn't involve animal sacrifices were welcome, as were no beliefs at all.

Krokar was Luperci dominant, and accepted all species. Non-shifters were also welcome, although they might have been somewhat limited, only because hands were required for many jobs like building, tailoring, etc.

This spring festival celebrated a new year of trading and traveling was about to begin. Springtime marked the period of good fortune and luck to be brought to the pack once again.

The summer, being the nicest part of the year, was the time for some caribou races and the annual "Sink or Swim" contest where every Krokaran was invited to test their skills at building a water-worthy vessel from scratch specifically for this event.

In the fall, after the crops were harvested for the year, thanks was given to the gods for those who believe, and everyone else simply celebrates another good season.

When two Krokarans chose to marry, a mateship ceremony was performed. This ceremony could be as simple or as boisterous as the two individuals pleased, but always involved the binding of their hands together with rope to form a symbolic knot.

Krokar's coming of age ceremony, wherein Guppies of 8+ months of age had to go fishing and make a catch. The first fish they reeled in became their emblem and marked their passage out of their childhood rank and into the adult ranks as a Greenhorn. 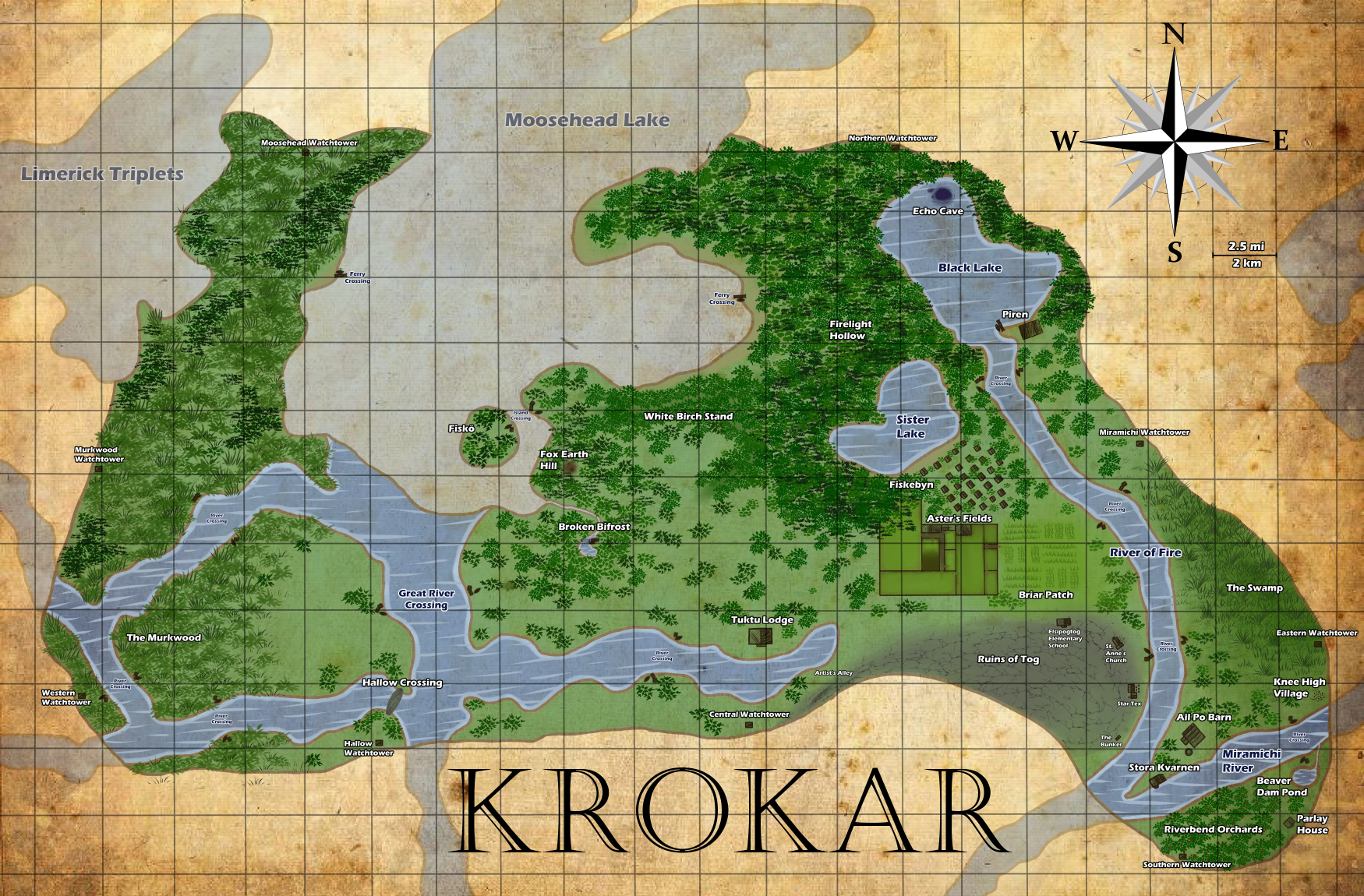 Krokaran packlands encompassed the northeast side of the River of Fire area and the eastern loop of Saint John's Chokehold. Their territory was home to several tributaries, an island, and two lakes, which were the main landmarks. Surrounding the lakes is dense forest that stretches north and west. On the sandy shore of the southern lake was Fiskebyn, the Krokar village, and Aster's Fields, which housed a stable and a barn with a chicken coop. It also served as grazing for the livestock.

Old remnants of human activity are slowly being reclaimed by the land, but the city of Elsipogtog, known in Krokar as the Ruins of Tog, still exists in the form of crumbling buildings. Surrounding the Ruins of Tog is what used to be farmland, which is now also overgrown and starting to be reclaimed by the forest. The Miramichi Wilderness made up the eastern part of the territory, which consists of forests and fields, while The Murkwood flanked their territory to the west.

Ranks were loosely based off the hierarchy of a ship, with five tiered paths focusing on Trade, Production, Foundation, Exploration, and Defense. Advancement occured through gaining co-ranks.