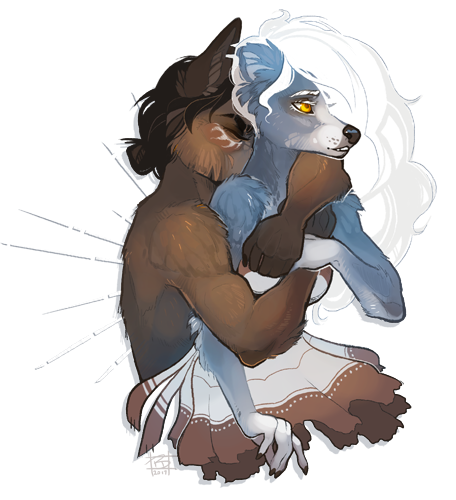 An heir to the Thistle Kingdom, Lokr was originally raised in a central chamber of the Ruins castle with his brother Larkkin, under the harsh tutelage and supervision of their father. However, early on in his life the young prince was taken from the kingdom by Sirius, who deserted to live in Alaska with his forbidden lover and previous Aquila of Inferni, Ezekiel.

Alaska was a cold and bleak life in comparison to the wealth and luxury that Salsola had provided. As a young teenager, Lokr was chased out of Sirius' new harem and spent a crucial period of his early life journeying the Northwest territories of Canada, barely surviving the deadly winter climate and joining up on occasion with sparse bands of travelers and natives. Often unwelcome and detested for his cunning nature and cruel eyes, and driven by a desire to reclaim his heritage, it was not long before Lokr left the wilderness of Alaska and returned to Nova Scotia - In search of the Thistle Kingdom, and the legacy his father had left behind.

Lokr is currently a leader of Salsola, ambitiously serving as The Lord Commander under its second monarch, Boss Salvia Eternity. He was betrothed and is now mated to Salvia's daughter, Osrath Eternity; Midwinter of 2015 Osrath gave two living daughters to Lokr, Elphaba and Indra, though the latter is not actually of his blood. She also miscarried one child during birth - A perfect darkling boy named Maugrim, whose cairn is hidden in the Blackwoods. In secret, Lokr continues an ongoing affair with the love of his life, Semini. In late winter at the beginning of 2017, she bore him two healthy sons: Calrian and Malik - Though their existence remains concealed from Salsola.

Born in the first weeks of Spring from a drunken attempt to keep his relationship with Semini safe, Lokr's bastard son Krios was brought into the world by his mother Ondine Heiwa (who had suffered long with an unhealthy obsession for Lokr, and swore only to keep his clandestine secret at a price). Ondine has kept the nature of Krios' conception, as well as the identity of his father, hidden from Salsola in an effort to keep both parent's reputations whole and her son safe from those who harbor grudges against the Revlis line.

In the early Winter at the end of 2017, Lokr made plans to desert Salsola to spend the remainder of his lifetime with Semini. He was caught out by his daughter Elphaba, whose fury and hurt over the betrayal led her to usurp his position as Second-in-Command. Lokr was made Pentiti by Salvia, an exile banished from the Thistle Kingdom forever. Is is unquestionable that Lokr has inherited and learned a lot of his father's traits. At a young age, Sirius was seen as a terrible god-idle to his son, and unintentional mimicry of his sire quickly cemented into personal characteristics. As such, Lokr can be sly and cunning, with a sharply bladed intelligence that borderlines the same genius/madness of his father. However, where Sirius was charming, Lokr is most often callous and brisk, projecting an attitude that is outwardly cold and reluctant to engage or connect with others. He has low tolerance for the population in general, and will not suffer the stupidity of another without grief.

Since the last apparent flare-up of his encephalitis, and in addition to his return to the homelands of Salsola, Lokr became even more withdrawn and terse. Due to his cursed bloodline, Lokr believes himself to be always on the border of true insanity, thinking this to be a trait he inherited from his father; as such, he can often be distrusting of his own senses or thoughts, which can heavily destabilize him emotionally. Although a reserved, collected and almost Spock-ian character on the outside, Lokr is the master of his own passions and desires, which burn bright as a flame within him; so much so that he fears burning those around him by unleashing it.

Whilst not as self-obsessed as his sire, Lokr is by no means a selfless individual, and will often choose to act in a way that will benefit himself most. His time lost alone in the wilderness has led to the development of a small series of complications within him, such as an obsession with survival at any cost, a simultaneous love and fear of solitude, and an inability to access his natural talent of emphatically connecting with others. This often leaves him in a continual state of paranoia, stress, or total disconnection from the individuals or situation at hand. He can be crass and vicious in an off-hand manner, and merciful in the next second; An unpredictability that often makes others uncertain around him. Increasingly, Lokr is being warped by his own bloodline and the culture of Salsola into a darker mindset, in which he will triumph over adversity at ANY cost. All it took was a chance encounter in the woods to change his life forever. For the rest of his life, Lokr would find his history and his thoughts split between two chronologies; Before Semini, and After Semini. Their tumultuous love affair began Midwinter of the year 2015[1], when the hunter's instincts led him to save a woman running for her life from a giant boar. After slaying the beast (and copping a gore to the ribs in the process), he was cared for by the stranger, whose entrancing beauty and pure spirit led quickly to his infatuation. The relationship that ensued was volatile and risky for both parties involved; Lokr remained desperate to keep Semini clean of the clutches of his own kingdom, while she in turn couldn't understand his detachment and struggled with the idea that his motives and ambitions strayed further than the growing love shared between them. After a series of ups and downs, they dramatically break up. This would be all well and good, but Lokr couldn't handle the rejection, and continued to pine for Semini even though on the surface they both seem to move along with their lives, each having children with another partner. Of course, fate has different plans and brings them crashing back together again, after which their love affair strikes up more strongly than ever before: Eventually resulting in the conception and birth of their two sons.

Since rejoining Salsola and ascending to the rank of Lord Commander, Lokr has found himself under the constant watch of the Boss. The current Queen of Thorns was his father's own hand-picked protege, and the two shared an "interesting" relationship. As time progressed from his disastrous youth, the dark male's attachment bloomed into a strange obsessive-devotion, in which he was both protective, mistrustful, hateful, and yet entirely loyal to the Tigress. Whether it was his blood connection to the previous King, or the relationship Salvia had with Sirius that lead to her intense interest in the young male, is uncertain; what was certain is that Salvia has been pulling his strings like a masterful puppeteer from the very beginning. Now that he is older, wiser, and has more to lose than ever before, Lokr is just barely beginning to understand the depths to which he has been manipulated, and precisely all it is that Salvia has taken from him.

Since their unwilling surprise betrothal, planned and enforced by the ever-meddling Salvia, Osrath and Lokr have kept much closer company than previously before. Their once fiery and combatant relationship has been forced, in close quarters, to adapt; It seems that they have now settled at an uneasy truce brought on by the impasse, both unable to advance without or free themselves from the other. It is possible that, in the charred embers of their ruthless hatred for one another, respect has begun to bloom. After the birth of their children, , Elphaba and Indra (only two of which are actually his), Lokr and Osrath have become closer and more conniving than ever before, working in tandem to project the perfect semblance of a power couple. This certainly does not mean that they are honest with eachother; Both Lokr and his beautiful, poisonous wife have deep, dark secrets that they intend to take to their graves.

Born as a prince of Salsola, Lokr was blessed with a very privileged first few weeks of life. As the firstborn son of the litter, he became the heir to his father's throne, and Sirius began grooming him for the position as soon as his eyes opened to the world.

As such, Lokr has always seen the world partially through his father's eyes - Sirius' shadow is cast over the moody youth wherever he goes. Departing from the lands of 'Souls when a rogue decision made his father leave the kingdom of Thistle behind, a new chapter of Lokr's life began, living in a small harem with Sirius, Ezekiel, their mates and children.

With Sirius' teaching sculpting his young mind, Lokr experienced harshness and kindness, lessons that were both crippling and expanding his horizons. As soon as the sons were able to shift, they were chased from the small band by their wicked father, who had determined that for them to become as great as he himself was, they needed to experience the true hardships of the bachelor life. Larkkin and Lokr travelled for two months, winding their way back to the world their father had left behind - Lokr with his eyes set on a throne he had only ever heard about; His father's greatest legacy, somewhere in the future.

However, the victorious return to his father's soil did not go as the youth had planned. Unbeknownst to him, Lokr suffered from a latent and increasingly intense case of encephalitis, a condition in which his brain is inflamed. The condition began to display itself more prominently on his return to 'Souls, and Lokr began to suffer from severe headaches, confusion, fatigue and increasing paranoia.

This finally resulted in the male fleeing 'Souls, leaving behind his brother. He traveled far north and lost himself to the wilderness there, and for months survived alone and in a state of mental distress. His condition worsened, resulting in hallucinations and sever migraines that often left him totally incapacitated. The prince's physical and mental state deteriorated rapidly, and it was only due to the heavily-enforced and well ingrained teachings of Sirius that he survived.

After a particularly bad hallucination, in which Lokr thought he was being attacked by the same bear that his father had slain a year earlier, Lokr cut off his own tail and collapsed. He would have died were it not for the lucky passing by of Pazuzu Lykoi. Pazuzu took the gravely wounded Lokr back to his father, Enkiel Lykoi, whose skill in healing brought the young Revlis male back from the brink of disaster. After a short recovery period, Enkiel, who wanted to be rid of the seemingly feral stranger whose life he had saved, dropped Lokr off nearer to the edge of the wilderness.

Having been medically treated and rested for a short period of time, Lokr was able to regain his wits (although he now considers himself insane, not being able to diagnose his own medical condition and putting it down to the deterioration of his sanity) and continue heading South-East. After a short travel, he arrived back in 'Soulsland for the second time since his departure as a pup, and has since returned to his pack of birth, Salsola.