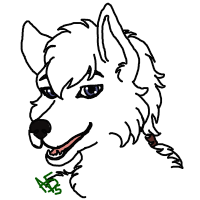 Derek comes from a small group of Wolves, he was the oldest of a litter but was also the runt. Despite his smaller size, he was able to survive with the help of the others of the pack and also helped watch over his younger siblings.

His pack lived in a grouping of caves until there was a cave-in. He fled with the rest of his family but lost track of them at some point. Then he started going from place to place, just traveling because he had nothing else to do. Has met many other canines, and often makes friends due to his easy-going nature. It was not often that his temper became the best of him, and when it did it would shock those who knew him. He chose to leave after showing his anger, thinking no one would accept him after seeing it.

After a time he reached Souls and decided to stay here.

He lived in Cour des Miracles until he met Constance and decided to move to her pack Sapient. He lived in Sapient until it disbanded, then moved to Krokar in hopes that it was close enough for his missing mate to find him. When Krokar disbanded after the fire that killed his brother, he moved back to Sapients old land.

Laidback and calm seems lazy and uncaring. Likes puns and jokes, and small un-harmful pranks. Will often be found taking naps, or just hanging around relaxing. However, if angered he will seem like a different canine. Can fight better than it seems, and is stronger than he looks. Will fight until he is completely worn out until the point of passing out, but has a resolve to keep going. Is protective of his friends, so it is wiser to stay on his good side. If you get on his bad side, you may end up regretting it.

However, it takes quite a lot to get him angry since he is more inclined to be easy going. It would take something like hurting or killing one of his friends or pack members to get him riled enough to even think of fighting.

Derek has white fur that is thick, and blue eyes. He stands at five feet while in this form, a little short for his breed.

He comes to about two feet even while in this form. 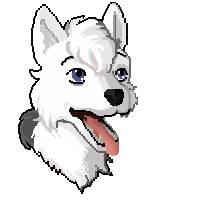