Inferni was a coyote and coyote hybrid clan. It was originally founded in 2002, and was the only pack refounded after the 2008 fire. It disbanded in 2018, fifteen years after its inception.

The coyotes' signature mark is their border decor -- grotesque skulls hang about the trees all around their territory, warning trespassers to stay away. Inferni's ranks are a multi-tiered system that includes various specialties and jobs, as well as dynamic portions of the ranks. Their social structure is generally very close-knit and protective of its own. Various families make up the majority of the population -- de le Poer, Lykoi, and Massacre are among them. Members are varying levels of aggressive to wolves; some will not tolerate the presence of outsiders at all, while others frequent the neutral territories and are friendly, if a little standoffish.

Inferni is, and has always been, rather different from the rest of the groups of 'Souls. Inferni typically tends to attract two things: canines with a darker mind and a darker past, and canines of coyote descent. Although Inferni was originally founded as a coyote clan, for several generations now the clan has primarily consisted of hybrids of varying percentages.

Inferni has been perceived as vicious, violent, and there are several negative stereotypes regarding the clan. It's certainly true that many of the Inferni coyotes hold certain prejudices against wolves, just as many of them simply wish to live in peace, preferring to keep themselves defending their territory rather than roaming the other lands in search of a fight.

Inferni does not typically adhere to wolfish standards of respect and submission, and a higher-ranked coyote will rarely assert his or her dominance without reason, nor will a lower-ranked coyote display submission excessively, though exceptions are made in regard to the Quintus coyote, which may be regarded with some level of dominance as a form of stress-relief for the canines of Inferni.

Inferni does not take kindly to trespassing, and those who trespass may be attacked on sight. Infernians are encouraged to defend their territory viciously, if need be. However, OOC policies of the pack permit minor outsider trespassing to stir up drama!

Members of Inferni are frequently blood-related, either via direct relationships like father and daughter or more distant relations, such as cousins, aunts, and uncles. Inferni has also been referred to as a "mafia" thanks to their extensive familial connections; in early Spring of 2008 every single member of Inferni was related in some way. Many of Inferni's coyotes descend from the Lykoi and de le Poer bloodlines, as well as the Massacre and Mogotsi lines. Starting in late 2011, many coyote-hybrid Moineaus found their way to the clan.

Most of Inferni is prejudiced against wolves, though if a wolf acts ambivalent toward or even curious about coyotes, most of Inferni will treat them respectfully, with varying degrees of standoffishness. A smaller number of them will be outright nasty to wolves regardless of that wolf's feelings toward coyotes. There are one or two coyotes within Inferni that will attack with little or no provocation whatsoever, but Inferni members tend toward neutrality until challenged, especially on neutral territory.

Inferni decorates its borders with skulls, bones, and other fearsome decorations -- red paint is frequently used on the skulls and other decorations. These items serve to ward off potential trespassers. Any member may make an addition, and Infernians are encouraged to maintain the frightful appearance of their borders. This tradition was imported to Inferni thanks to Gabriel, who discovered this practice in the Scintilla War and brought it home to Inferni upon his return. [1] [2] [3] [4] [5]

Beyond the Yahraw River lies the dark territory claimed by the coyote clan Inferni. Hardy trees grow anew among the fog-cloaked ruins of once-razed forests. To the east, mountains shadow the land and shelter a large cave system that serves as the clan’s den. Most distinct, however, is the coyote’s border decor: wolf skulls dangle from the trees or perch on pikes along the territory’s edge. The grim visual markers declare the coyote’s borders and serve as warning to would-be trespassers. 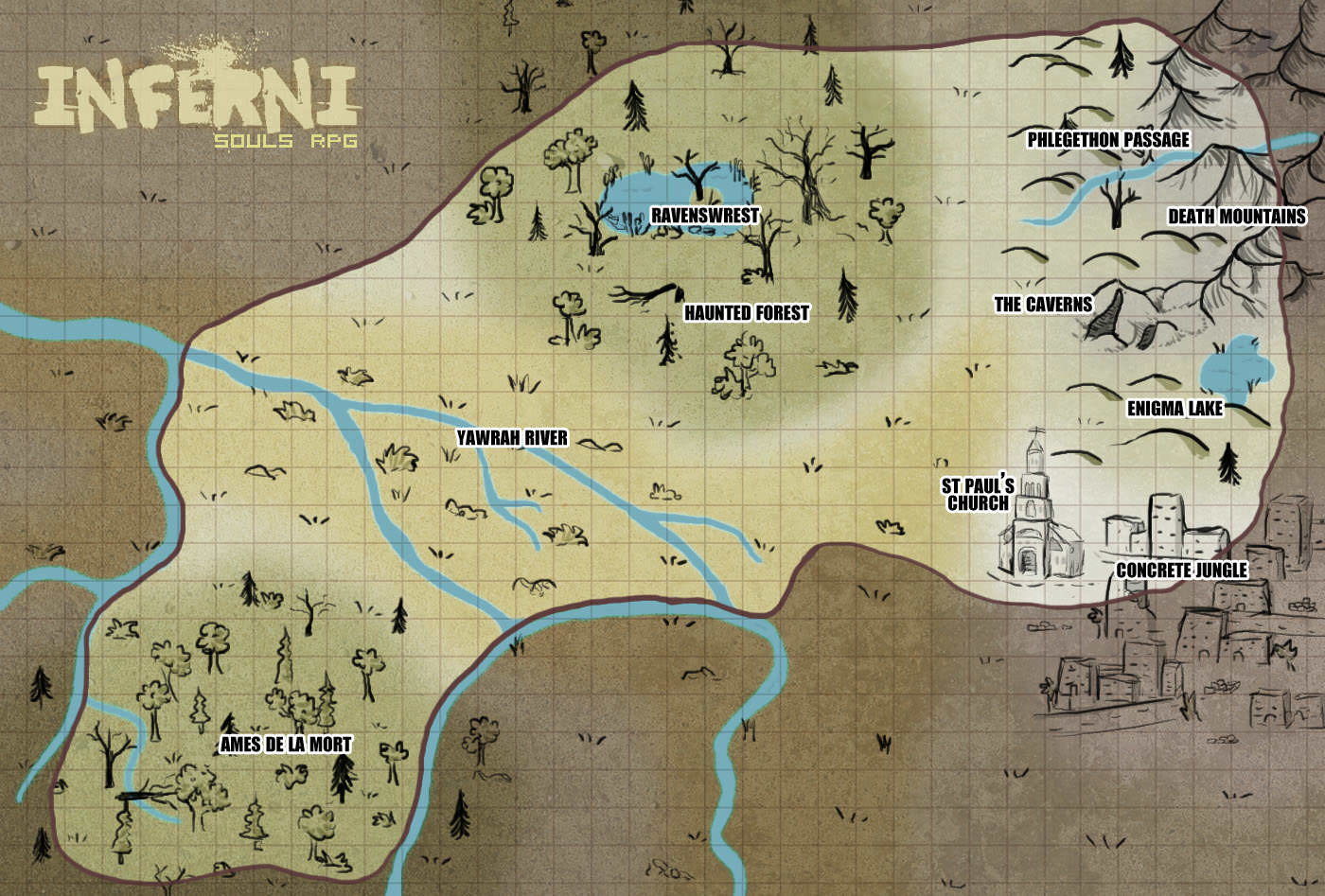 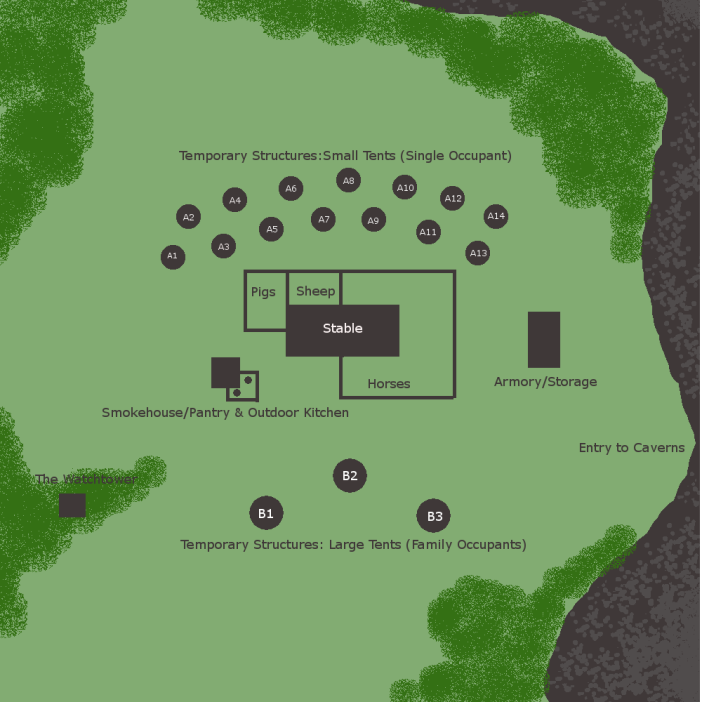 Inferni was formed after several coyotes wound up in the original Bleeding Souls territory at the same time. From their loner beginnings, these coyotes banded together loosely at first, nearly crumbling several times before the simultaneous influx of several bloodlines resurrected the clan. Many of these families remain firmly entwined in Inferni to this day, and to discover Inferni's past, one must also encounter these major players.

In 2008, when the great fires struck and obliterated the former territories, Inferni was the only group to survive the trek over the mountain. They prevailed largely due to Gabriel de le Poer's "foresight" of the fire, as well as a passage through the mountain rather than over it. Following their 2008 re-founding, the clan was subject to various tensions with packs such as Dahlia de Mai and Phoenix Valley. The tension with Dahlia culminated in two full-scale wars between the packs, the most recent of which took place in early 2010.

Upon Gabriel's retirement, his son Ezekiel became Inferni's Aquila. After losing both of his subleaders in October 2011, Ezekiel became far more aggressive in arming and training Inferni's members for combat. The fall and winter of 2011 saw a growth of membership, and with it, the upper ranks began to fill. In summer 2012, after the Boreas conflict, Ezekiel stepped down and gave the clan to Myrika Tears.

Under Myrika and her subleader and mate, Vesper, the clan experienced peace for a few years -- but that peace was shattered in 2015 with the Cour des Miracles war. Vesper wrested control from Myrika at war's end, becoming the first non-Lykoi Aquila to lead in eight years.