Molcaxitl Yocatl was a long-time slave, kept as an NPC for various characters from 2011 until she was freed in March 2013. She first washed ashore in Anathema, later following her mistress Eris Eternity to Salsola. Several owners later and a near-miss with Machidael Lykoi, Molca gained her freedom in Inferni, where she lived for several years. However, Molcaxitl was killed by her former leader Salvia Eternity during the Inferni-Salsola War when she refused to divulge Inferni secrets.

She assumes the form of those around her it differs from her own. While she does not like her Secui form, she does not exhibit a clear form preference otherwise. 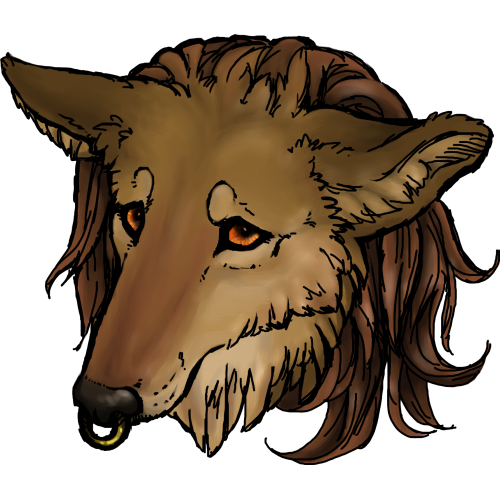 While Molcaxitl is not a "loyal" canine, she is thoroughly indoctrinated as a slave. Much of the vocal indoctrination focused on the ideals of black and white thinking, as well as segregation of the slaves and freed persons. Molca also experienced regular sensory deprivation; she spent many hours locked in a small room with no light, food, or water. Due to extreme learned helplessness conditioning, she will never be driven to escape slavery (except perhaps to take her own life).

Molcaxitl was born into slavery. Her family in Eterne enslaved her even prior to her birth. Molca served her family, even being forced to breed -- her children, also slaves, were immediately removed from her care. Molca was eventually shipped northward, traded off for some belongings.

She experienced horror after horror, finally landing in Anathema in 2011 after a shipwreck... whereupon she experienced further horrors, eventually. After some time of being a decent (i.e., non-abusive) owner, Eris Eternity turned against Molcaxitl and subjected her to some terrible things, too. Thereafter, however, first Salvia Eternity and then Draugr Helsi were decent to her.

She was very nearly placed into the most terrible position yet with Machidael Lykoi, but Sepirah Lykoi demanded the coyote's freedom and in 2013, Molca found herself a free member of Inferni -- a coyote pack -- for the first time in her life, at five years of age.