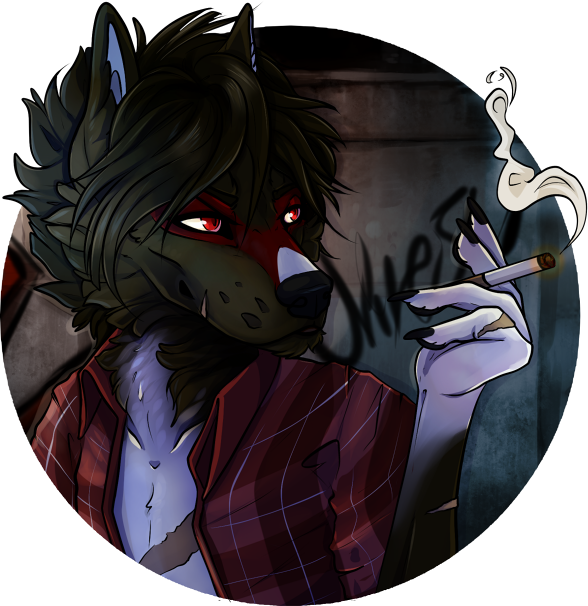 Salvador Sadira is the son of former Ichika no Ho-en leaders Razekiel Lykoi and Nayru and brother to Kahlo Lykoi, none of whom he has ever met. Sally's early childhood was tumultuous: His father was absent at his birth, and Salvador was thought to be stillborn by his mother and abandoned. He was found by Wretch D'Angelo and briefly raised and socialized by Eris Eternity in Salsola. During a war, he was traded back to his home pack in exchange for a Salsolan captive, where he lived a short while until its dissolution. His mother and sister, already departed like his father, never learned of his survival.

Refusing to rely on others for his own wellbeing, Salvador has since staked out a life for himself primarily as a loner with occasional stints of pack membership. While good at heart, Salvador is a jaded man numbed to the romanticisms of life by repeated exposure to and participation in various levels of violence.

In April 2017, he returned to Nova Scotia for undisclosed reasons. Upon meeting his niece Dove, Salvador lingered around Inferni long enough to become assimilated, though his commitment to the clan is informal and aloof at best. Seeing the clan as young and out of its league in a war against what he remembered of Salsola, Sally participated as a fighter with Inferni in the Inferni-Salsola War of autumn 2017, and remained with the fire-clan for a long time thereafter. Not long following the unexpected loss of Dove during her stay in Cour des Miracles, as well as the dissolution of Inferni, Sally returned to wandering as a loner throughout Nova Scotia.

Salvador was born January 2, 2012 to leaders Nayru and Razekiel Lykoi in Ichika no Ho-en. His father absent and uninformed of his conception, Salvador was thought to be stillborn and left in the wild. Ichikan Wretch D'Angelo discovered and left the pack with him, eventually bringing the infant to Salsola, abandoning on the borders. He was found by Eris Eternity, Wretch's mother, who took Salvador in and raised him alongside her older daughters, Ataxia, Artemisia, and Harrow and later her younger son, Basilaris.

When Salsola organized raids against Ichika no Ho-en a few months later, Salvador was used as a bargaining chip to regain the freedom of Magnolia Takekuro, taken captive by the Ichikans during the raid. Salvador was brought to the meeting slightly drugged and exchanged for Magnolia's freedom. His mother and sister, already having left Ichika no Ho-en, never learned of his survival nor existence. He remained in the pack until its disbanding a few months later, when he set out on his own determined to make something of himself.

Sally's earliest months after Ichika no Ho-en were spent with various loners credited for his survival, and broke off on his own when he developed the survival skills and age to do so. A drifter, Sally has since drifted from place to place, in and out of packs, and in and out of friendships and flings. He has both witnessed as a bystander and participated in a number of wars, his involvement dependent on the morals and stakes; as such, Salvador has come out the other side rather hardened and numb, with a depth of character rarely hinted at in his interactions.