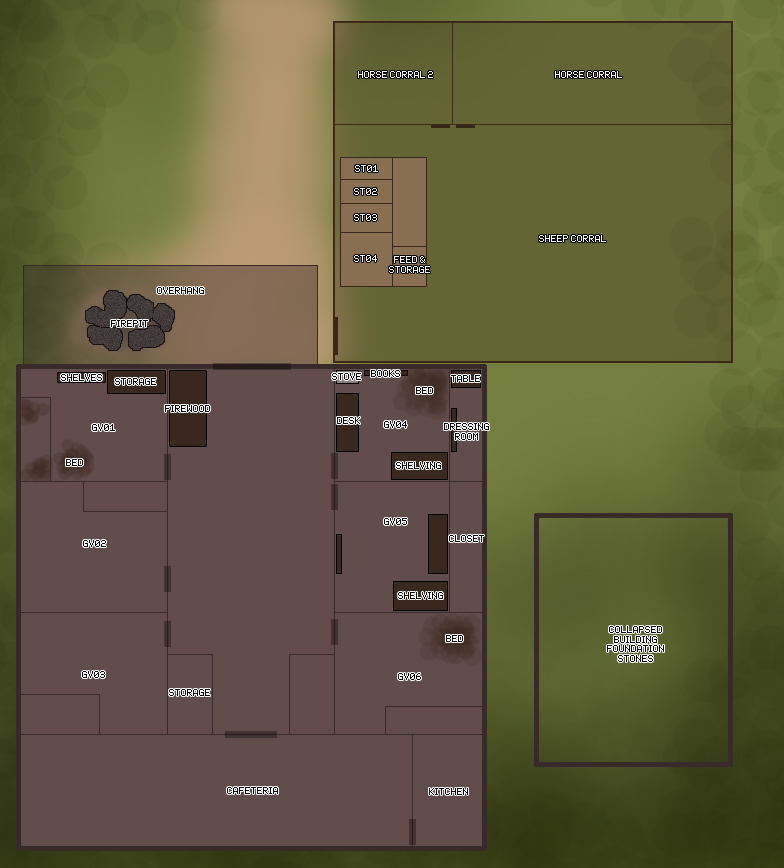 Just north-east of the lake and along a narrow, desolate road lays Great Village, announced by a weather-beaten sign. Perhaps once great, most of it has fallen to ruin -- the westernmost parts of the town have sunken thanks to lack of maintenance on the dykes surrounding the town. Some buildings are visible only up to their windows, their construction warped twisted to the will of the earth itself. There are few worthy of inspection for scavenged goods and fewer still worthy of occupation, but prey animals take up residence in the shattered remnants of buildings.

The largest building, the six room elementary school, still stands intact on the edge of the town. A few large stones make a fire ring just outside the entrance to the schoolhouse.

The main entryway doors and the rear doors of the cafeteria are big and metal. Doors inside the schoolhouse are generally made of heavy wood, most with windows. Some windows are broken, while others still have glass. Most of the open windows in the used rooms and the main hallway have been boarded up or covered with large strips of leather. The unused rooms are not sealed in this manner.

Abandoned after the Inferni-Salsola War, the schoolhouse was picked through by the departing coyotes and scavengers alike, with only the cleanliness of the rooms and small repairs evidence that it was used by Luperci.

In the early months of 2020, a loner band known as the Troupe settled in and around the Great Village and made the Schoolhouse their base of operations. They decided to clean and restore the building to workable conditions, using locally harvested and scavenged materials for furnishings and other decoration. Notable changes are the wooden lean-to constructed over the fire ring, and the cafeteria space converted into a showroom with a stage. In August of 2020, they opened their doors to the public, and the entertainment space became known as La Estrella Roja. The nightly shows and other attractions made the venue a fun pit stop for lone travelers and curious pack members alike.

In October 2011, a corral was constructed around a collapsed outbuilding. The building was replaced with a simple three-walled shack-style building containing horse stalls and a larger stall for the sheep. A third room, the only fully enclosed room within the building, was used for storage.

Some chickens and a handful of scraggly sheep run feral around the barn.