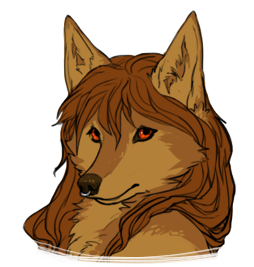 Xochime Kimaris is a coy-wolf hybrid, littermate to Tlantli Kimaris, Imacai Kimaris and Miqui Kimaris. She was born in 2009 in her homeland Eterne, a mecca for coyotes in southern Mexico. However, Xochime was quickly taken from her family and shipped northward as a slave. She lived for some time in servitude before being rescued and freed by her sister, Tlantli Kimaris.

Xochime previously resided in Salsola -- until the pack's slavery practices got to her, that is. She departed after witnessing Eris Eternity abusing Molcaxitl Yocatl, wandering for some time and gaining skill in combat and wielding knives. Xochime returned to 'Souls and has been a member of Inferni since 2012. "Reserved and quiet" are the best words to describe the present incarnation of Xochime. She listens more than she speaks, although she is not uncommunicative by any means. She speaks at length, and is often almost forceful of speech -- especially concerning things she believes strongly (e.g., anti-slavery).

Xochime will trade, given the opportunity. She is likely to just give things to those within Inferni, but otherwise demands a fair trade price from outsiders.