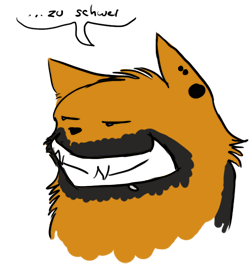 Cotl Van Ulrich was the eldest son of Hans C. Ulrich and Alara J. Ulrich. Cotl was born in Leipzig, Germany, alongside three other siblings. Cotl was a longtime member of Inferni and was the Imaginifer for many years.

He was raised in Germany, but due to his Tourette's Syndrome and related verbal and physical tics, he was isolated from much of the rest of the pack, kept in a cave where he live most of his youth and young adulthood in. He was physically, & mentally abused while he was a youth, and so he took to drawing and art to relieve some of that pain, and once there began to be a talent with his art, his little brother brought his teachings to Cotl who would later use Marik as his canvas — Marik loved it and often would come to Cotl for new tattoos. Marik also was the one who help Cotl become known as a Tattoo Artist and a Piercer in their homeland by bringing friends to be inked by the elder Ulrich son.

At some point, he was able to escape the torture from his parents and he ran away on whatever ship could take him to lands beyond what he could ever imagine. When he landed in Nova Scotia, a land so unfamiliar to him, he wandered until he found himself at the borders of Inferni, where he was reluctantly accepted into the clan of Coyotes by the then Aquila, Kaena Lykoi. He became known for painting portraits within the D'Neville Mansion, where he lived in a room labelled "ENDE". He also was frequently intoxicated from alcohol, marijuana, and/or other drugs.

Cotl notably was the first Ulrich to own Maschine — a horse that Cotl tattooed the face of.

Cotl also is the unknowing father of Viktor Ulrich, Till Van Ulrich-Lykoi, and countless other bastard children who never got to meet Cotl and [they] often put him on a pedestal because of the stories that their mothers told them.

In the Spring of 2014, on an outing with his children, Lorelei Ulrich-Reinhilde and Drystan Ulrich, while teaching them to make Molotov cocktails, he ends up setting himself on fire and ultimately dying a brutal death and in the process, and burning down a random building in Inferni's Great Village.[1]

Artwork of this character on this page is thanks to Sie, Raze, Titmouse, Kiri, & Alaine! Jmonster designed this design and is the sole owner of this design. This design may not be used without explicit permission. Images in gallery are by the respective artists that are labeled underneath them! Thank you to every single one of you for your contribution to bringing this character to life!