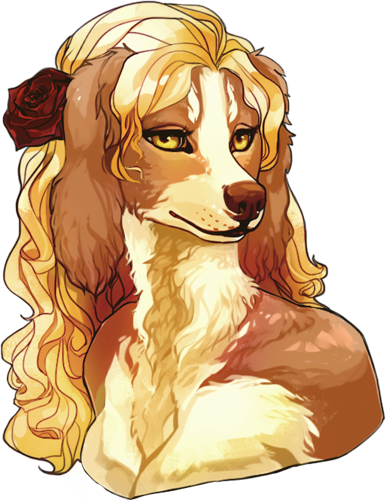 Akantha was born with her sister Semini to the Baroness of Onuba, Thalia Amaranthe, and Captain Edgar Lanseer on a cold November night out at sea. She was raised in affluence, and this is apparent in every aspect of her: from her striking appearance to the way she conducts herself. She spent her formative years with Semini, learning what it meant to be a proper lady of the court. Their lessons ranged from needlepoint to horseman-ship, and the little duo took to knowledge like fish to water.

Upon Semini's departure to begin her apprenticeship, Akantha dove into her role as a Courtier and stirred up rumors and gossip in her wake. Hoping to extinguish the furor about her golden daughter, Thalia sent Akantha away under the guise of spiritual enlightenment, though she was meant in part to locate Semini when she supposedly jumped ship near the coast of Nova Scotia.

Akantha had been a member of the pack Sapient since its founding. She has held the rank of Adcredo, and was once the pack's Diplomat, Courtier, and Merchant. In November 2015 she also completed her Area of Study specializing in Cultural Anthropology.

In early January of 2016, Thalia Amaranthe visited her daughters in Nova Scotia and left Camellia Amaranthe behind to aid Akantha with rearing her children. On January 18th, 2016, Akantha gave birth to her first litter. Her children are Solomon, Lucian, and Odalis and although unconfirmed, they are suspected to have been fathered by Bacchus Revlis of Salsola.

Shortly after, Akantha fell into a depression and subsequently out of grace from her lofty position in the pack. She received word in December of 2016 that Thalia had arranged a marriage for her in Onuba, and that she should return home at once. After many discussions with Semini, Akantha eventually decided to return home to Onuba to fulfill this arrangement, bringing her daughter Odalis with her.

In recent events, the former Alta Baronesa Thalia Amaranthe? was forcibly removed from power and replaced by her daughter. She has continued to spurn tradition by marrying a prominent member of the Robles Family. Duque Isandro Robles wed Alta Baronesa Akantha Amaranthe in 2017.

In the spring of 2018 Akantha welcomed a new litter of children to the world: Mavros, Alcuin, and Lucrezia 'Lu'.

By first glance Akantha seems vain, shallow and a bit of an air-head. Her mannerisms are all very flowery and seem to mimic what is stereotypically graceful and elegant. She is boisterous in a kind way, and has such an energy and exuberance that she could almost say anything and it would seem like it carried the weight of a real opinion. However, a keen individual would notice very quickly that Akantha is sharp as a tack. Although it would seem that the words that roll from her tongue can be easily dismissed, and she would let them be dismissed, they are frequently packed with a deeper motivation. She doesn't say anything that she doesn't mean, and she doesn't do anything that she doesn't want to do. She has a strength behind her demeanor that emerges with time to oblivious people, and immediately to perceptive ones.

She has a solid intuition of people's characters and knows how to work this to her advantage. Her intentions are muddled between selfish desires and impulses, and a real need to be a good person. She loves genuinely and sincerely enjoys socializing, and this complicates her feelings and inclination for manipulation. She is a convincing actress because she lies most to herself, and has put her weight behind these beliefs, though the right person and the right words could dismantle it. Her dislike is never made apparent in ugly ways - she can be vengeful, vicious, but in manners that are complicated such that it is difficult to pin the fault entirely to her.

She is in many ways as fragile as she appears. But as it is with Amaranthe children, Akantha is undeniably strong of will.