Semini was a spirited sailor who came to 'Souls in the late summer of 2014. Ranked Navigator of Krokar from 2015 until 2017, she eventually stepped down to focus on raising her sons, Calrian and Malik. At the end of 2017, she left 'Souls with her lover, Lokr Revlis, to sail her father's ship. She and the exiled Salsolan prince presently reside in Onuba, assisting her sister recover the town after her daughter and a rag-tag group of extremists tore down one of the pillars of their society.

She and Lokr went on to have their last litter together in 2019, bearing three children: Siolene, Serafina, and Morholt.

Semini was a compassionate, foolhardy, and emotional person. She believed strongly in the goodness of others, sometimes to her own detriment, and was often drawn to dangerous situations in search of this deeply held conviction. She was intuitively empathetic and desired to connect and to understand others, though at her worst she could be prejudiced, obstinate, and bitterly resentful. Like the sea breeze, her mood could change in an instant. At best, she bolstered community and companionship amongst her friends and family, and at her worst, selfishly pursued her own interests over the comfort and security of her loved ones.

Acts as conscience directs her with little regard for what others expect of her
Believes in all the virtues of goodness and right, but has little use for laws and regulations
Basically good, but tends to be selfish and maybe a bit greedy
Will not use torture to extract information or for pleasure, but may "rough up" someone to get information.

Semini was generally accepting of others but ignorant, and struggled over the years to shed old prejudices inherited from Onuba and her time at sea.

Semini was motivated to help Krokar grow and foster good trade relationships with the other packs in the region at the time. She often feared Krokar's collapse and for the safety of her companions—they saw many events in their lifetime, from the Red Star falling to the Austringer Hostility.

Semini was a social drinker, and held no real interest in other recreational drugs aside from tobacco, which she also only did in social situations.

Semini was not particularly spiritual despite the dominant religion of Onuba; she was raised to believe that religion was both illusion and a tool of control.

Related Skills: Navigation, making rope and complex knots, fishing (pole, castnet), swimming, diving, shipwrighting
She is familiar with a variety of boats, ranging from rowboats to trade ships, and is comfortable working them. She is a confident sailor and genuinely loves being out on the water.
Related Skills: Acquiring wood and other material, use of carpentry tools, making resin varnish
Semini developed her skills in carpentry and woodworking primarily during her time in Krokar. She learned under Gavin, and repaired many structures and boats while she was there.

Semini was raised in Onuba and spent not an insignificant amount of time aboard her English father's ship. She is fluent in Common (English), Spanish, and Portuguese, and can read and write in these languages.
She can tear up a dancefloor, just, not by Onuban standards.
She learned how to lay traps early on after joining Krokar, and carried on the practice up until she departed.
Semini grew up rough-housing on ships with other sailors, and so fought primarily with her fists. She picked up using a sling when she arrived at Krokar, and has some familiarity with short blades, but otherwise this was an undeveloped skill. 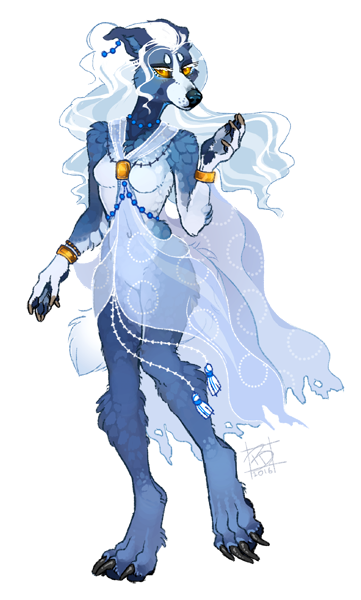 Although a wolfdog hybrid, she looks mostly to the dog side of things. Her fur has a fine, silky texture and comes to a medium length, curling at the longer areas of her thighs and elbows. While shifted to Optime, her hair is long and white. Her long, floppy ears are notable for their doggish look, and she typically wears them tied back. Semini's build is of a shorter stock, toned by continuous work; her waist isn't pinched like an hourglass but straight, fortified by strong abdominals, and flanked by thicker hips and a thicker torso.

Semini is relatively humanized and prefers her Optime form for most tasks. She will sometimes embrace her four-legged form, but not often.

Please note that Semini's color palette may be artistically exaggerated in her depictions.

Semini belongs the Amaranthe family; as such, many of their members are directly and indirectly related to her. The exterior is overgrown by large flowering bushes, with portions hacked away to allow sunlight through the windows on both sides of the large wooden door. The windows have wooden louvered window shutters which can be closed during the winter and left open during the warmer seasons. A Navigator's Production flag in the left window like a curtain. The interior consists of a large open space, half of which is dedicated to a platform bed frame covered in animal pelts. The bed is pushed against the back wall beneath another open window. There is a half partition that divides the rest of the room into a kitchen area, where a brick fire place occupies the right-most corner. A row of three cabinets butts up against the right wall and two against the partition, all rebuilt after being destroyed in the meteor of 2016. The roof has been hastily rebuilt as well after collapsing, and now has many holes through which rain sometimes leaks inside.

Semini and her sister Akantha were born to Thalia Amaranthe and Captain Edgar Lanseer on a cold November night out at sea. She was raised on the Amaranthe estate and trained in all court affairs and etiquette until she displayed a greater interest and skill in seamanship. She entered an apprenticeship with her father soon after, forgoing her claim as Thalia's firstborn to be the heiress of the Amaranthe family. She then sailed with the Saltwater Storm on trading voyages throughout the Mediterranean, and began to learn navigation via sextant by her father's first mate, Cibran. Driven to prove herself, she excelled in her training and became a respected part of the crew despite her gender and youth (two traits which saw prejudice in the sailing world).

The Saltwater Storm made its second run to Freetown in the summer of 2014, where disagreements with the crew and her father led Semini to separate from them by stealing her father's dinghy. She wrecked this boat in a storm off the coast of Nova Scotia, and in August she became a member of the pack Krokar. Due to her determination to prove her worth, she quickly rose to the rank of Magnate of Production. Following her journey to Cour des Miracles, where she spent the summer refurbishing a ship for them, she was promoted to Navigator.

On January 1st, 2016, Semini gave birth to Tiamat and Lotan, fathered by Sapien Nikita Volkov. Semini's relationship to her daughter became strained following her breakup with Nikita, and ultimately it deteriorated completely upon Tiamat's discovery of Semini's affair with the Lord Commander of Salsola, Lokr Revlis. At the end of 2016, Tiamat fled Krokar with the witch Laevisa Arena in search of her absent father, and Lotan soon followed his sister.

Not long after, Semini gave birth to her second litter. On January 25th, 2017, Semini bore two sons, Calrian and Malik, sired by Lokr Revlis. They raised them together in a small cabin hidden in Mount Oromocto, and when the sons were old enough they were brought to Krokar. For a time that was all too brief, they were a happy family.

The end of the year brought about new opportunities. Semini was summoned to Portland and given her father's boat by her mother, and informed of the whereabouts of her missing children. This, in addition to the Inferni-Salsola War, pushed Semini to make the difficult decision to leave and assist her sister in Onuba. She asked Lokr to abandon his pack and join her at sea. Their sons Calrian and Malik, now adults, made the decision to stay in their homeland and bid their parents safe travels.