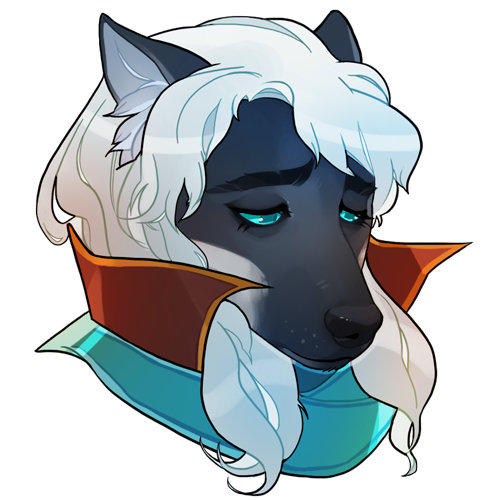 Malik is a morose heavy-eyed young bard with a big white steer called Mondo. He is presently being dragged around the whole hecking land by his feckless and charming chump of a brother, Calrian.

Mal and Cal were born to star-crossed lovers Semini Amaranthe and Lokr Revlis one bright winter morning. Their family unit was not especially normal, and in their early childhood the brothers were primarily raised by their mother in Krokar. Malik loved it there, where things were simple and the ocean was close by. Like many in his mother's family, he grew to have a close affinity for the sea.

Malik has overheard more than he would like to admit about his father's dark ancestral legacy (raising more questions than answers to be sure), but pretends to be ignorant for the sake of his mother, whom he loves very much.

When Semini inherited her father's sea vessel in the winter of 2017, she and Lokr decided to set sail for Onuba with both boys in tow. Calrian's headstrong refusal placed Mal in the dreadful situation of having to remain behind in cold and dreary Portland, Nova Scotia.

When the stipend left to them by their parents began to run dry, Mal and Cal started to learn the meaning of hard work. Taking dock shifts and doubling as stable-hands, the two boys made an uncomfortable living catering to the East Dock's wealthier mercantile class and its constant influx of sailors. Luckily for the brothers Mal's affinity for music landed them a gig in the local dive, Mullen's Bar, where he played to a drunken crowd each night for cheap change and stale bread. Calrian's natural talent as a networker led to an unlikely alliance with a number of Mullen's shady workers and patrons, which in turn led to the formation of The Troupe.

The Troupe is currently touring Nova Scotia. Having hoped to settle for a time in Krokar only to find it destroyed and abandoned, they are displaced nomads looking to make a living by any means possible.