Tyris Kurosoul is the son of Palaydrian Soul and Jiva Takekuro, born in Vinátta on 1st December 2012 alongside his twin brother Taro Kurosoul. As an adult, he joined Krokar in fall 2014. Being young and carefree he ran after a beautiful woman, who he had been smitten with to find she was using him for his work and when he called her out on it dropped him. Ashamed of going back to Krokar he haunts Nova Scotia as a loner. 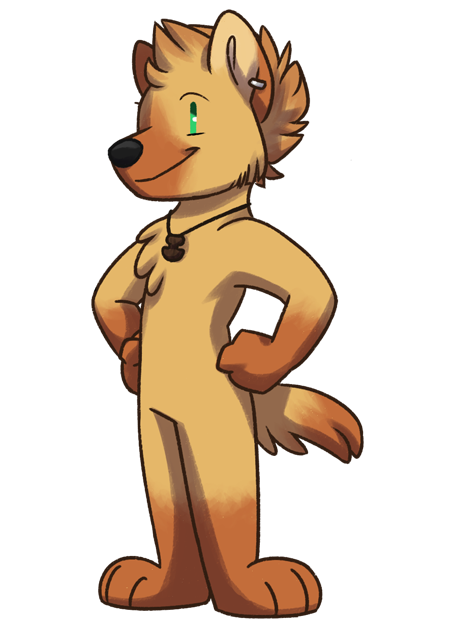 Tyris is the larger of the twin brothers, and is nearly the exact opposite from his brother as far as coloration goes. His pelt is mostly dominated by a creamy blonde color save for his paws, mane and muzzle which happen to be a dark coppery color. He's a pretty large individual standing at nearly seven foot tall and weighing in at close to 260lbs. This makes for a pretty imposing presence, much to his chagrin. His mane grows in a similar fashion to his grandfather's does.

Macho-man, doesn't enjoy outwardly expressing negative emotions such as sadness and will become quite embarrassed if someone catches him acting out on these feelings. He likes feeling like people can depend on him and look to him for guidance and comfort, but does not like having to lean on anyone else.

He is fairly outgoing, and is the life of a party, always tries to be in the middle of things. He has a dominant trait that shows as he will take initiative and show that he can lead someone into something and take anything on his shoulders that happens be it good or bad