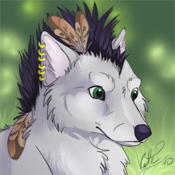 Niro Takekuro is the brother of Orin Takekuro, and is a current and longtime member of Cour des Miracles. He was previously mates with Amaranth Catori.

Niro and Orin were born to loner wolves and for a while they traveled with their parents until they were 6 months old, when they were attacked by bandits in Tampa Florida, they were separated from their parents and couldn't find them, unsure of if they were dead or not, Niro and Orin did what they could to survive until they found an escape from Florida on a boat heading to the western countries where Orin chased after a dream from a journal she'd read and so they ended up in Cour Des Miracles.

In Cour des Miracles, he meets his fellow pack members, and soon realizes he doesn't have to be on guard 24/7, he becomes more laid back and soon makes many friends. He even acquires a Golden eagle's egg by the help of Heath morte dre Soul. He even finds that he is quite infatuated with Rurik Russo's daughter Liliya Russo. Around the time his egg starts to hatch he is overwhelmed with also catching a redtail hawk. He is kept quite busy by the two for some time, but even so, he finds the time to hunt with his pack and help with repairing, building or just doing whatever in between. Niro soon finds his life more complicated when he discovers he wants to start a message bird service around the outlying packs. He'd discussed it with others, and will soon head out to the other packs. One thing he doesn't know, well remember, is the nice night at the beach with Lolita Monroe when he got drunk and lost his virginity to the Dahlian woman.

His trip is postponed by Liliya Russo running away after he a fateful night where she came to him and they ended up mating. In his despair he found himself getting too cocky in a pack hunt. Something no wolf should do while handling a moose. He ended up breaking a leg and having his right pinky crushed to the point where it had to be amputated. After a while as things got quiet, Niro found himself enjoying the company of Amaranth, who by then had become the woman he loved and he asked her the day he was able to change into his Optime form if she would be his mate. Many months later he finds out that he has pups by Lolita, three girls growing up in Dahlia de Mai.

He soon finds himself in a routine of keeping his mate happy and calm while going to Dahlia borders where he visits his girls as well as training his birds. In which he catches a Bald Eagle by the name of Gregor.

He tries to be a good father and visit his girls as often as he could, though he rarely got a chance to see them often, and in one instance he is attacked by Argul Rakezael, though no lasting injuries. After this, though he soon finds Lolita is leaving with two of her children and one of them stays with him, though she strays and ran away for a few days in which worries the man to death. He finds out she is not craving for his attention anymore and soon feels he's a bad father only to find out he's having yet another litter.

Niro's litter with Amaranth has two stillborns and only one live pup. The two were both female, and made the couple mourn, while the only living out of the litter made sure to fulfill their lives. Jiva Takekuro keeps Niro on his toes and helps them forget about their troubles with the other two pups.

Once Jiva starts growing and Niro found out his sister was missing he found himself leaving the pack, not only to look for her but to start his message bird service with pigeons he captured and trained. He doesn't find Orin though, she find him, but after meeting with her he continues to each pack to work on the service he started. On his way from Dahlia he meets with his Daughter Magnolia Takekuro where they both make up and though they do, still make their separate ways.

Afterwards the struggle in AniWaya Conflict comes to Niro when he finds out his daughter Foxglove Monroe is being held captive and he goes with a group to extract the prisoners there; though they were only able to get out his daughter. Soon things come to a head and a battle rages between three packs and Niro joins them.

After the big battle, Jiva says his goodbyes to his parents, and then Niro too leaves with Amaranth to travel.

Niro returns many months later to rejoin Cour des Miracles along with Amaranth and their two youngest children Heiro Catori and Tasha Takekuro. He soon becomes active within his pack and makes a trip to see his children. He learns his daughter Magnolia has had three pups and he has become a grandfather, and then gets to witness his son Jiva propose to Palaydrian Soul. On his way back he meets with Ayasha after finding a hurt owl and she offers to take care of him.

Afterwards Lillith Trombetta-Behr attacks him, leaving his ankle in tatters after cutting the tendon and scratching old scars on his face, cutting off his hair and eating a good part of his shoulder. Emmanuelle Brenna finds him and takes him home where he is treated by various healers. He is unable to walk for months, and during this time learns his mate is pregnant again... and it cannot possibly be his litter. Amaranth leaves Cour des Miracles before the birth of her illegitimate offspring, and Heiro chooses to follow her rather than stay with his father and Tasha. Niro bitterly lets them go, and their mateship is over.

Niro is single for the first time in years, and has to readjust. It is then he meets Rose de le Poer, the lovely young daughter of recently deceased Strelein von Rosnete.

Niro is a very protective individual, who tries to keep his book loving sister out of trouble. He's quick thinking and very good with his hands although he'd rather be training birds. He is also adventurous which is an occupational hazard when it comes to protecting his older sister *only by a few minutes ;)*. He is more pessimistic than an Optimist but he has some moments of the better of the two. His love is for birds especially raptors, so any mention of any type of raptor he will be quite the chatterbox. 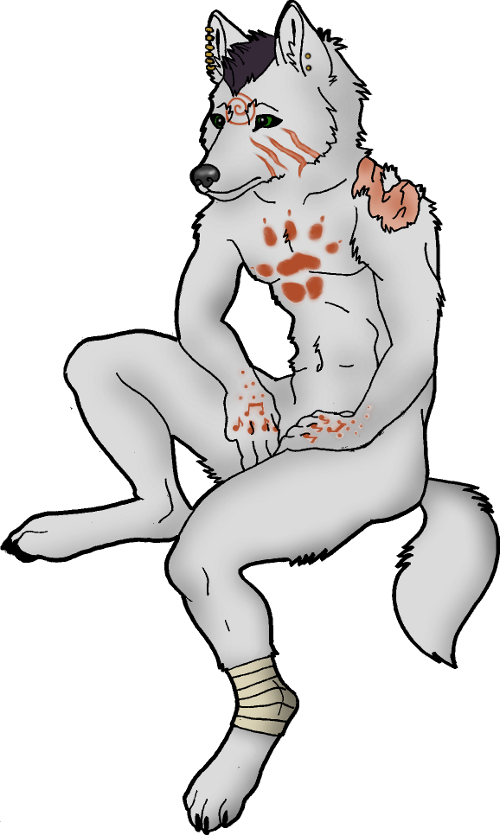 Niro and Amaranth, by Kiri

A medium gray wolf (about 6ft 3in or so), with black hair shaped in a small Mohawk, lined with a few feathers, has a tribal tattoo on his right arm, and a line of 8 small hoop earrings in his right ear.

He has recently received four paralleled claw marks to the face, has missing fur on his left shoulder which is slightly misshapen in a way as though someone took a bite out of it., he's also missing a pinkie off his right hand. He has a scar on his left ankle in which he has a limping gate, tending to be tender on that foot.