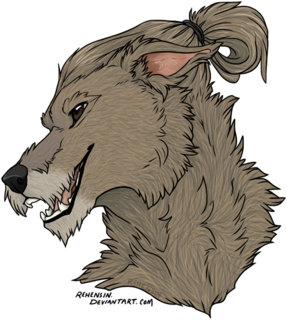 Though not as superstitious as some of his fellow packmates, Oscar holds a loose belief in animism, similar to the majority of Krokar. He holds a basic level of respect for all living things as he was taught to do so by his parents. This mean that he will not take more than is needed, and kills his prey as swiftly and cleanly as possible. Occasionally Oscar may refer to the River Goddess when wishing luck upon others, though this is more from his observations of others using similar phrases rather than his spiritual belief in the River Goddess.

* Does not know this character by name

Oscar Morelli was born in Krokar on January 9, 2016, along with his siblings, Nellie Cormier, Norah Morelli, and Remy Cormier. His young life as a pup was easy and fun: he played, he got scolded by his parents when he deserved it, and he chewed on many things that aren't supposed to be chewed on. Oscar's world was literally shaken several months after his birth. He was told that the Red Star fell, and while he did not understand exactly what that meant, he was fully aware of the effects: earthquakes, heat, and lots of destroyed trees.

He was also vaguely aware of what happened with the Austringer Cartel, although due to his youth, he avoided much of the conflict. The most he knew about was that his parents and the rest of the pack were upset. Then there were new faces around, and one other pack member, whose name he did not know, was no longer around.

As Oscar continued to grow, he eventually shifted and started learning from a few of Krokar's members. Lucille taught him about horses, which he continued to learn a bit from Hazel. He also learned a little bit about swords from Gavin. Despite his training with weapons, when Krokar sent aide to Sapient, Oscar remained behind. It was frustrating to him, but he also understood that he would not have been much good in any fights.

Oscar has begun to find his way in Krokar, deciding what he wants to do with his life.