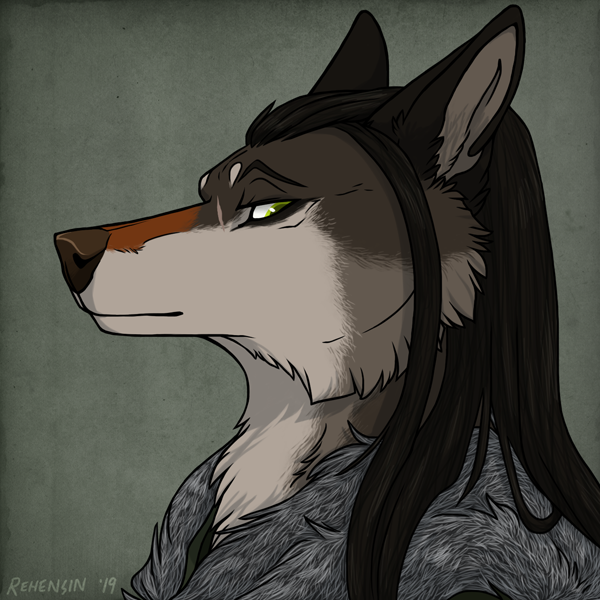 Argive Hemlock is the son of Eumelia Stavros and Agilmar Kader, born into the pack of Moss Reach in the White Mountains of New Hampshire. His early months of life were blissfully normal, but, as he grew older, Argive began to notice more and more of his father’s abusive tendencies towards his mother. His teenage and early adult years were filled with conflict due to his father's abuse and over all shady activities. Argive apprenticed under his mother in the medicinal field until his third year, when he was forced to leave his home pack after murdering his father. He bounced around from place to place afterwards, furthering his studies in his field of interest while darkness festered and grew. In Portland, he found a new focus, and made his way north in search of the Kingdom of Salsola. He joined their number in early fall of 2019, and was sponsored by Sanguine Valentine.

Currently, Argive is a member of Salsola, where he is ranked as The Family. He holds the job of Veleno (poisoner).

Outside of the pack, Argive assumes the name “Thanasis,” and typically smells of smoked wood and mint.

Argive was born Achilles Stavros to Eumelia Stavros and Agilmar Kader, in the pack of Moss Reach, located in the White Mountains of New Hampshire. Eumelia was the area’s local medicine woman. She was highly talented and known for her sweet and caring nature. Agilmar had been a Loner she found by chance and nurtured back to health, sparking a whirlwind romance that led to Eumelia being pregnant only months later. Eumelia’s brother, Kleon, disliked her new mate, however, Agilmar was well-liked by the pack and Eumelia herself. The early months of Achilles’ youth were average, though, were riddled with warning signs that would not become obvious for many more seasons to come. His parents disagreed here and there, nothing out of the ordinary, however, those arguments eventually escalated physically. His father would always apologize afterwards, give his mother gifts with a glazed over explanation of their origin. His mother would always forgive him, and the cycle would continue.
Achilles was unhappy with it, but was scared into silence by a firm hand of his father’s, reassured that everything was alright by his mother. They made it feel like it was all commonplace, and that family affairs were not something meant to be shared. Both abused by Agilmar to some degree, Achilles grew close to his mother, and developed an interest in the medicinal field as a result. When he came of shifting age, he began an official apprenticeship underneath Eumelia. Because of this, he spent a lesser amount of time with his father. When he did, his father took him on “business” trips, where he inadvertently became an accessory to his father’s schemes in tricking and stealing from other Luperci in the region. His father tricked young Achilles into secrecy, making him believe that the pack’s chieftain had specifically given Agilmar such a job, but that it was to remain under the table due to its nature.
As things at home continued their vicious cycle of abuse between his parents, Achilles eventually worked up the courage to speak with his uncle, Kleon. His uncle had long suspected things were amiss in the family home, however, with Agilmar having the rest of the pack as putty in his hands, there was little he could do. He agreed to teach Achilles how to fight when the boy requested it. Things grew tense when Agilmar found out about the lessons, however, Achilles managed to convince his father under the guise of wanting to protect Eumelia—and to better help his father—when they left the pack.
Achilles grew, and the situation at home only continued to deteriorate. He had a few fights with his father over his mother, however, he had always been put in his place, either by losing the bout or when his father threatened to hurt Eumelia in retaliation for Achilles’ attitude. After his father learned of his brother, Jihan’s, death, the true, downward spiral started. Fights between Agilmar and Eumelia grew more violent, as did those between Agilmar and Achilles.
The final straw though was after Achilles had found out about Agilmar’s new affair with another woman. On the day he intended to tell his mother, he found his father and two other Loners violently raping a beaten Eumelia. When he moved to protect his mother though, he was shooed off by his father, reassured by his mother. It was just like every time before, but, Achilles should have never left. When he returned after the men and his father had left, he found his mother dead.
A week later, Achilles got into a fight with his father again. Armed with a poisoned blade, he ensured his advantage to overtake his larger and stronger father. He brutally murdered Agilmar, and went to proudly proclaim this to his uncle Kleon. However, the abuser’s death was not met with celebration. With Agilmar having long manipulated the pack to believe him to be a man without fault, Kleon knew that Achilles would be sooner tried as a killer than a savior.
Reluctantly and with a heavy heart, Kleon bid that Achilles leave the pack before the death could be discovered. Thankful as he was that Agilmar was dead, Kleon knew his sister would have rather her son live than for him to be put to death for avenging her.

In the months after leaving Moss Reach, Achilles traveled from place to place, never staying in one for very long. His heart ached for the abrupt loss of his home, burned violently that the pack would still view the villain of his life and murder of his mother as a “good” person. He internalized this bitterness, living a less than honorable lifestyle, and was content to lose himself to his studies. It was during a visit in Portland in the later, summer months of 2019 that he found a new focus in life. He adopted a new alias, Argive Hemlock, and headed northwards.