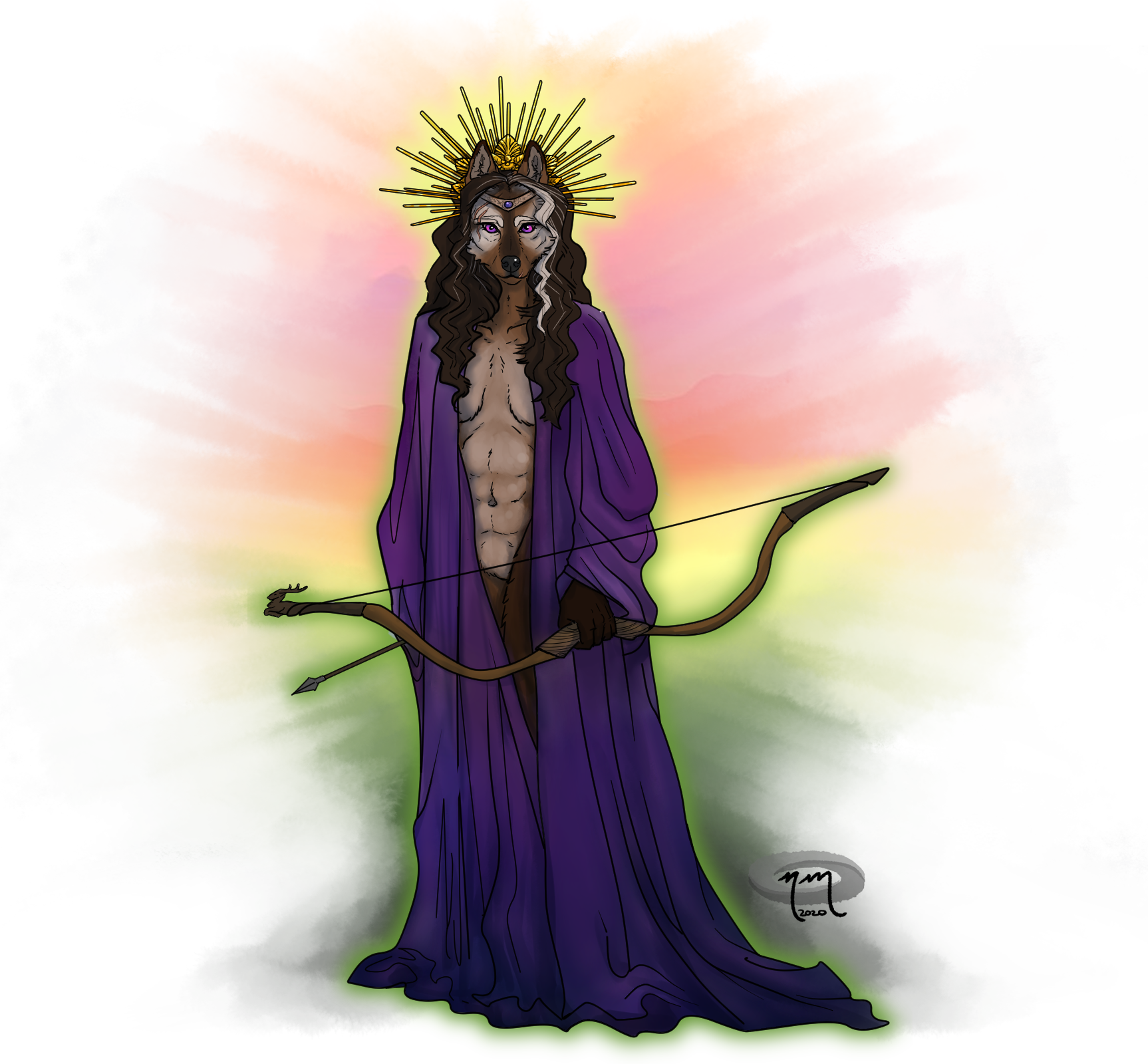 Mostly stoic and serious, Aldora will stare one down without realizing she comes off as intimidating, though her eyes are always gentle. In truth, she is soft at heart, and loves to entertain. Even if she does not show joviality, she enjoys humor and reverie, and has a soft spot for the downtrodden. Only those who purposefully do harm (either to themselves or others) draw her ire.

Her mother told her stories of "the wolves in the sky" who run among the stars, and she believes that her Grandfather and mother are among them. She was also giving a reading by Maelyx Nocturne and believes that it was legitimate. After her mateship to Minerva Griffith she has also adopted the earth goddess diety as part of her spiritual codex.

Aldora was the second born of Veyra and Callum's second litter; she is their first and only daughter. Aldora and her brother Rohan were well cared for and loved by both parents until they were able to fend for themselves.

In her first winter, Aldora's life became more complicated. She was matched with her mentor, Lyris Stryder, and soon after saved her cousin Myra Garcia's life after she nearly drowned while they played. Aldora only managed to do this by her body shifting to compensate, and the two of them became much closer for it. Aldora also bonded closely with her other cousin Arlen Stryder, while holding somewhat of a rivalry with her final cousin, Remus Knight.

After besting Remus in their first blood, Aldora, riding the high of the victory and feeling invincible, challenged her siblings and cousins to take down an enormous bear that had been plaguing and raiding the food stocks of Casa. Her brethren readily agreed, but it was doomed from the start. The youngsters were not fully prepared to take on the behemoth, and many of them received injuries, despite their success in killing it. They were punished by their leadership, forced to stay behind the Fort doors for a month.

Aldora was ashamed and felt like she had betrayed not only her family, but the entirety of Casa di Cavalieri. Once the punishment was lifted, she decides to leave the pack for a time to learn more about the outside world and other packs and possibly bolster relations with them. She hopes this journey will give her perspective and wisdom, so that when she returns she will no longer have the pride and foolishness of youth. During the the time of her travels, she learns that Anathema and Inferni were not as hostile as she had been told, but that Salsola was still a problem to be dealt with. She also rescues Kjintora and Ovidiu from Prince Edward Island, both of which had been stranded there since Midnight Shores disbandment.

With winter dying, she returns to Casa di Cavalieri only to learn that while she was gone her mentor Lyris Stryder died from complications of childbirth, and that Raine Nightshade had violated Arlen Stryder and Night Hushhowl. Aldora feels shame for having not been present during this time, and feels as if her journey had done little to prove her worth. She remains secluded for a time, listless and unsure of herself. Then, in the spring, tragedy strikes again when the land is infested by strange giant flowers, the essence of which drives wolves to madness. Her mother Veyra succumbs to this madness, and throws herself from a cliff-face. Aldora is thrown into depression and numbness.

After some time, Aldora begins to find hope again, and begins to focus on the pack and bettering it and herself. She starts to rise in the ranks, and then, falls in love for the first time with Howland Reeves after he pursues her for some time. All is well, and Aldora joins the Brotherhood as Master Tactician. After a time, she ends her relationship with Howland after some difficulties. Her new roll among Casa's elite gives her focus, and she begins to take charge in mentoring new and current pack members alike, so help them become the best version of themselves.

After helping to defend Luca from the attack of trespassing loners, he promotes her to Council as Pack Advisor. She charges head-first into her roll, maturing seemingly overnight, and becoming a gentle and caring figure of authority for the rest of the pack. She begins a new romance with Minerva Griffith and is for the first time in her life confident in herself and her abilities. At the same time, she finds herself becoming more forgiving of the evils in the world; she is much more willing to dismiss the crimes of others, a shift in perspective from her once Neutral Good nature.

Beginning to find her niche in pack-life and society, Aldora enjoys a time of peace and joy. However, in the Spring of 2019, Luca is attacked by a trespasser and in his defense, Aldora take's the villain's life. The aging Lune sees potential in his niece, and asks her to join his side as Sola. Aldora feels she does not deserve the position, nor does she feel she can fully live up to the expectations of leader, but she accepts.

The beginning of her leadership is fraught with bad omens as the world seems to crumble around them with one natural disaster after another. Not only this, but it seems as if the young Sola is but a footnote to her uncle's rule; she does not feel she is his equal, but it happy to be subservient to him. All is well for a time, until Luca is once again attacked. This time he is gravely injured, and even after recovering, the Lune seems off. Luca falls to paranoia as strange things start happening around the pack, he starts making rules so as to control the Cavaliers. Tension builds to a head, which culminates in Luca's killing of two pack-members, believing them to be planning on overthrowing him.

Chaos reins as Aldora is unable, or incapable, of controlling the situation. She is removed from leadership as well by Raghnall Thorburn who claims she, along with Luca, are not fit to rule. There are several months of limbo as Casa is controlled by a small group lead by Raghnall, yet upon the day of Luca's trial, he is found murdered. The day before, Aldora was infromed by one Fredrick Knight that it was Raghnall and his cohorts behind the attacks and murders. The Sola finds her courage and faces the Scot, which ends in his and his companions' deaths.

Aldora reclaims her throne and names Cedric Stryder as her counter-part as the new Lune. However the pack is incensed that Aldora and Cedric would take it upon themselves to deal out justice, and the pair swears to never do such a thing again. Still, it would be much a time before things settled in the pack, and members began to trust their new Sola and Lune again.

Casa di Cavalieri slowly, but surely, returns to normalcy. The pack is blessed with many new members and many puppies in the beginning and Spring of 2021. Minerva and Aldora decide that it is time for them too to become parents, and in early summer of that year bring into the world their first children Ambrose Griffith, Veyron Knight, Lyra Damaichu, and Zanthe Damaichu. They are overjoyed.