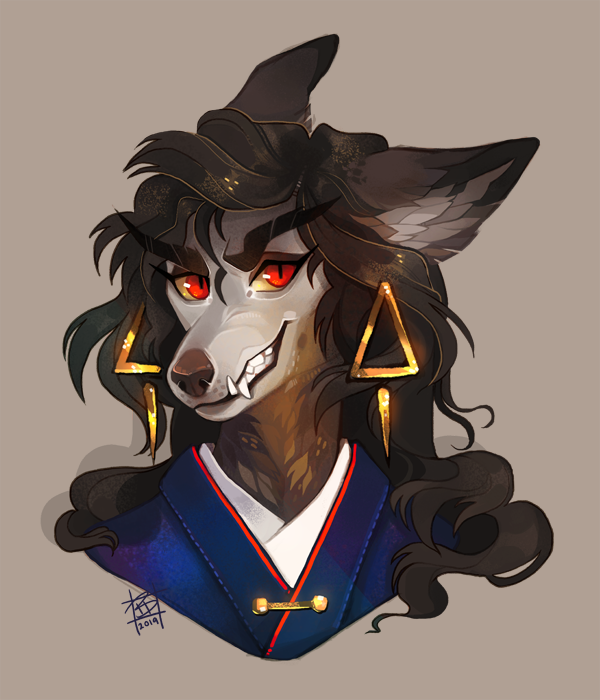 Elphaba is the daughter of disgraced Pentiti and ex-Salsolan leader Lokr Revlis and prior Gamekeeper Osrath Eternity. She was born alongside her (unbeknownst) half sister, Indra Revlis, and her fullblood sibling , who tragically died in the womb due to complications prior to birth. She currently resides in Salsola as a member of the ruling elite.

Elphaba was born a darkling child in coloration compared to her fairer-furred sister. She carries the traditionally earthen pelt of the Revlis bloodline, and has inherited only a little of her mother's curves and grace to fill out an otherwise lanky, willowy build. Elphaba has suffered from very sensitive eyes since her birth; They are a deep and painful cardinal red in hue, and are particularly affected by very bright light. As an heir to the throne of the Thistle Kingdom, Elphaba grew up with veritable wealth and power at her fingertips, and wanted for nothing - Other than everything that she was told she could not have. She is crafty, manipulative, charismatic and dominant in nature, traits born out of retaliation to her physically unintimidating stature. Her deeply inquisitive outlook, sometimes seen as rebellious and enigmatic, often leads her to become involved in less than ideal situations - During which she is normally guarded by either her intimidating hired mercenary The Bull, or her combat mentor and tasty snack Brocade Valentine.

A vocal and prolific member of Salsola's infamous coven, Elphaba is a motivated practitioner of the Craft, and holds the Witch title in spite of her family's history of traditionally conservative values.

In the early winter of 2017, Elphaba usurped her exiled father to become one of Salsola's Mafiosi. Her title, granted by then-Boss Salvia Eternity, was "The Hierophant".

By winter's end 2018, the young woman's ravenous ambition had returned. With the treasonous aid and political backing of her co-conspirator cousin O'Riley Eternity, Elphaba challenged her aging grandmother for the throne. For her boldness and cunning (and by Salvia's retirement manifesto), she was granted leadership over Salsola as its Boss, with O'Riley serving as her second in command. This unprecedented rise to monarchy would mark a new age for Salsola, dividing the kingdom's loyalty and giving agency and legitimacy to bureaucratic rifts in the noble houses.

As a young woman, now Queen, Elphaba is curious, intimidating and bold. She frequently visit the Blackwoods, wherein stands the largest grandfather pine, under which is buried the body of her deceased sibling. Death has not kept the siblings apart, and Elphaba is particularly well-attuned to her brother's unearthly presence.

In the 2017 Yearbook, Elphaba was awarded the following superlatives: The Dynamic Duo (with O'Riley) and Best Frenemies (with Trident).

In the 2018 Yearbook, Elphaba was awarded the following superlatives: The Dynamic Duo (with O'Riley), Most Likely to Spread a Rumor About Themselves and Biggest Ego in the Universe.

In the 2019 Yearbook, Elphaba was awarded the following superlatives: Most Likely to be the Boss at the End of a Dungeon and Ohhh Sweet Delicious Drama (with O'Riley & Odalis).