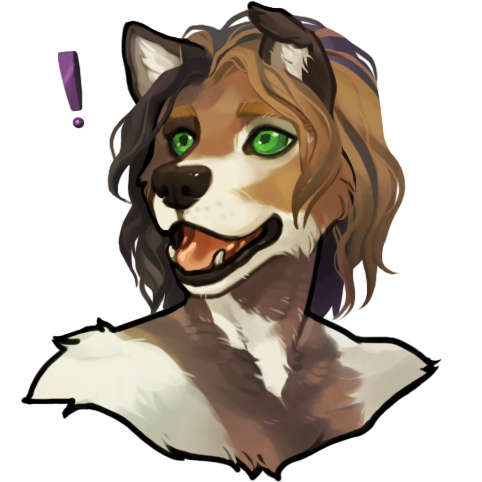 Arran was born and lived in Old Caledonia until its destruction in 2019. Following that, he fled with his ewe, creatively called Sheep. He met up with some other refugees from Caledonia and they gathered together with new canines as well, banding together to survive. Arran's Great-Gramma, Rhavan Fir-Chlis, turned up with Arran's sister, Erebel Fir-Chlis and two goats. Eventually the band created a new pack, New Caledonia. As they settled in, Arran was able to get a livestock pen set up with help from pack mates, so his sheep and the goats had a place to live.

His skills and disposition were useful among the pack, leading him to be a Heartward and a Herdsman. Arran finds gardening to be fun as well, although it's mainly a hobby because he especially likes to dig. His work there earned him the role of Grovetender as well.

Arran is the father of six children. The first four, Gwaun, Tuilinn, Soron, and Tavor, were born in January 2020 two each to two mothers, who were a mated pair of loners. They struggled to raise them without a pack in the harsh winter, so they brought them to New Caledonia and Arran took on parenting all four of the pups since he had a pack to support him. The next two puppies, Meril and Lossë were born to pack mate Saga D'Angelo in December 2020. 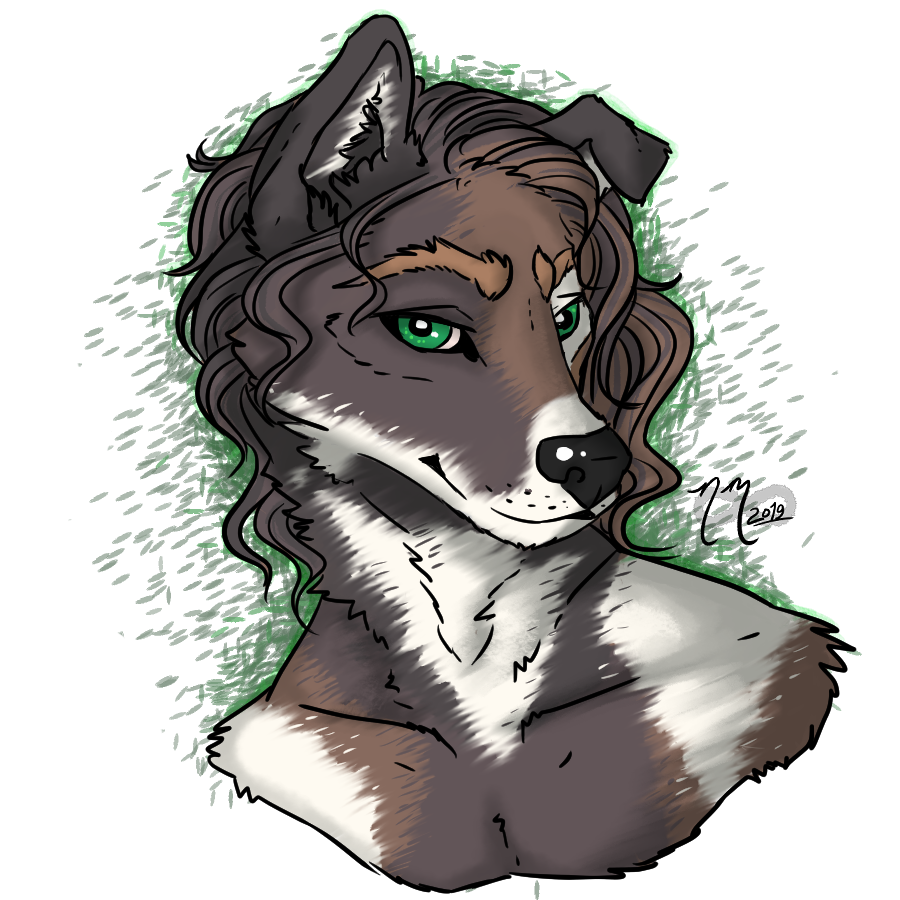 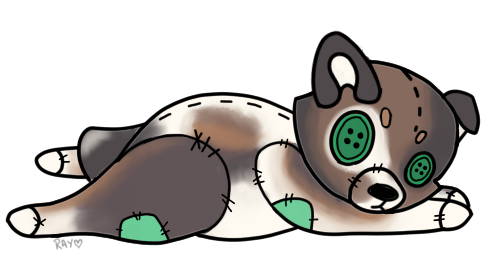 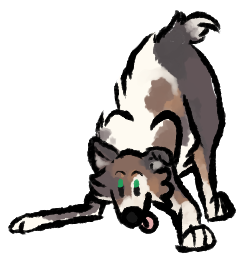 Arran is a high-energy dog. He makes friends easily (he thinks anyway), and is willing to talk to anyone. Because he always seems happy, and his attention is often scattered between a few things at once, he doesn't necessarily always come off as the smartest canine around. Really, he is good at solving problems once he manages to focus on one thing at a time. If his flock or family are in danger, he turns into a snarling ball of aggression with a big, deep bark.

Despite his sometimes scattered focus, Arran is a really good listener. When he knows he needs to focus, he can do so to make sure whoever is talking to him feels heard. It's part of his role as a Heartward. He enjoys helping other solve problems, or at least being there as a supportive pack member while they work through their problems on their own. He knows that there's often no quick fix for them, and he may not always be able to offer advice, but he can listen and empathize along the way.

Arran believes in the dual gods of the Menel. He feels a particular affinity to them because they are genderless, and while he doesn't identify as non-binary himself, gender in general is not something he really thinks about too much in regards to himself.

Arran is demiromantic and pansexual; he doesn't really care what parts someone has or what they wear or don't wear. He's more interested in both of them having a good time, but he doesn't really feel anything towards someone until he has formed an emotional connection with them. He doesn't mind monogamy, but he also doesn't mind non-monogamy, either; he generally leaves that up to his partner.

Arran has had alcohol but nothing else. He's not sure he would seek out ways to anything more. If someone was very adamant that he would like whatever drug they were offering, he would probably go along with it.

Born into the Menel clan, Arran grew up in a family who kept livestock. He had two moms and a dad who loved each other, along with a bunch of siblings. From a young age, he learned to herd sheep, goats, and other animals that his family cared for. Once he shifted, he was able to help with more tasks rather than just moving the animals around and helping to guard them. Keeping an eye on the animals was his favorite task, though. It provided him with lots of opportunities to run around and burn off his large amounts of energy.

Unfortunately, his life was not always peaceful, and his clan fought off enemies from time to time, meaning he had to learn to fight as well. He was okay at it, preferring to fight in a feral style or with a staff as his weapon since it could also be useful as a walking stick when he was watching their flock.

In the wake of the fighting, Arran was left with the pants he had on and managed to save exactly one sheep, a ewe he has been just calling Sheep. Save was perhaps not quite the right word. He found her as he was escaping the destruction and got her to come along with him. In the confusion, he was split off from those he knew, but he figured it was most important to get out and that he would catch up with them later. He was quickly forced to leave his pants behind in order to herd her more easily in his Lupus form, and so off he went.

Since he wasn't the best hunter, Arran struggled to keep himself fed as he traveled. He also failed to immediately come across any other refugees from his homeland, a fact that both surprised and worried him. Eventually, Arran stumbled upon Asura Creo's home and she helped him out before he set off again, hoping to find others from Old Caledonia.

Eventually, after more time spent traveling, Arran stumbled upon the Queen of Old Caledonia, Vodeva. She was in rough shape, hidden among the underbrush. To Arran's delight, his excited barks drew Iomair back to his wife. Arran had found his people. He chose to stick with the King and Queen, happily guarding Vodeva and Sheep as Iomair scouted around, looking for more of their brethren.

Once the group had gathered a fair number of other refugees from Old Caledonia, they settled down at Mount Oromocto, calling their group New Caledonia. They gained a few more members while continuing to explore. Arran's great-grandmother, Rhavan Fir-Chlis, and his sister, Erebel Fir-Chlis, found him and brought two goats with them. The Loner Band eventually decided on a new home to live in after gaining more members and founded a pack under the same name.

After New Caledonia was officially founded as a pack, Arran went about getting things set up for the goats and Sheep. He and Rhavan also chose a small house in City Square. Erebel had decided that she was going to continue traveling and did not join the pack. Arran was able to get help with setting up a open for the sheep and goats.

Fall of 2019 brought times of heavy fog, often referred to as mists. It lent a spooky feel to their new pack lands, and sometime Arran wondered if it was an omen. The bell tower would some how ring sometimes, and they kept finding blood spots and little idols. Vodeva also went missing, and despite searching for her she was nowhere to be found for a long time. Arran was eventually part of a search party that finally found her. She was thin and frail, but alive!

During the late fall of 2019, Arran did a little bit of traveling where he met up with a female couple named Squa and Lark. A couple nights of fun led to both females being pregnant, which was unknown to Arran at the time.

An especially bad blizzard buried the area under sometimes 10 feet of snow. Arran had brought the sheep and goats into his own house just in time, which lead to utter chaos and a lot of smelly poop inside. Eventually he was able to dig out from their door and get them a little area to move around in while waiting for the snow to melt some more to make it easier to get out of the house and around City Square.

In the meantime, Skua and Lark were new mothers struggling to raise the puppies without a pack in the harsh winter and aftermath of the blizzard. They eventually found New Caledonia and Arran took on parenting all four of the pups, Gwaun, Tuilinn, Soron, and Tavor, because they were weaned and he had a pack to support him. He wished that the mothers had stayed so that they could all raise them together, but they moved on. Raising four puppies was utter chaos, but Arran enjoyed it immensely. He had help from Rhavan and other pack members and he got to watch the puppies grow into their little personalities. The pups especially took to Vodeva.

The puppies grew, becoming more independent even though they all remained living in the same house and the family slept in a pile every night. Arran was gaining recognition as a Heartward, and the sleeping pile offered the opportunity of a unique, comforting cuddle pile for the 'invite someone into your bed' aspect of the co-rank. The pups' mothers stopped to visit from time to time, and during one of the visits, Soron decided she wanted to go traveling with them. It made Arran sad, but he also understood why she wanted to do that. Around this time, Arran brought home his very own mini-Macha with stripes. He named the kitten Silif, and she quickly settled in with Rhavan's two cats. In the fall, Tavor considered leaving with them, too, leaving Arran feeling more sad than before. He sought out Saga because she had been considering the Heartward role as well, and ended up poking emotional wounds that he didn't know Saga had. Their comforting of each other led them to bed, and to more puppies.

Meril and Lossë were born in December of 2020, leaving Saga largely confined to her bed for several weeks. Sine the puppies had to stay with her, Arran did everything he could to be useful, including taking his turn with them once they were able to leave Saga's side for a bit. Although his relationship with Saga was not romantic, he thought that they made pretty good co-parents.

Raising these two puppies was a lot different from raising the previous four. They had a log of extra hands with his older offspring and Saga's as well. Arran got to enjoy the first couple of months before weaning, too, which he hadn't been able to do with the first ones. Meril became his shadow, often following Arran around as he worked.

During the spring, Arran was approached by Bellad Songthorn with the idea of a healers guild, which was to cover both physical and mental healing. Arran thought that it sounded like a good idea, and agreed to be one of the founding members if they were able to get enough interest to create the guild, which they were able to do soon after in April.

Del Cenere Gang held their Lancaster Stockshow in late August, which Arran attended, along with Gwaun, Lossë, and several other New Caledonians. Arran competed in a timed sheep herding event, but did not place well due to an injury to his paw during his turn. He was also part of the pack's BBQ team, together with Gwaun and Celaeno Bonecarver. He accidentally added far too much spice to some of their food, causing them to be extremely spicy and result in some stomach upset. They didn't place. Arran also attended the livestock auction where he won two lambs for the pack, paying with goods provided by the pack.