There are many locations in the Court to live, as there are cabins and houses spread throughout the territory. Listed here are the most popular places to reside and some more details on what to expect with these homes. You are by no means limited in where you live, and can occupy random locations in the territory. Members are encouraged to note where they live for people to reference! 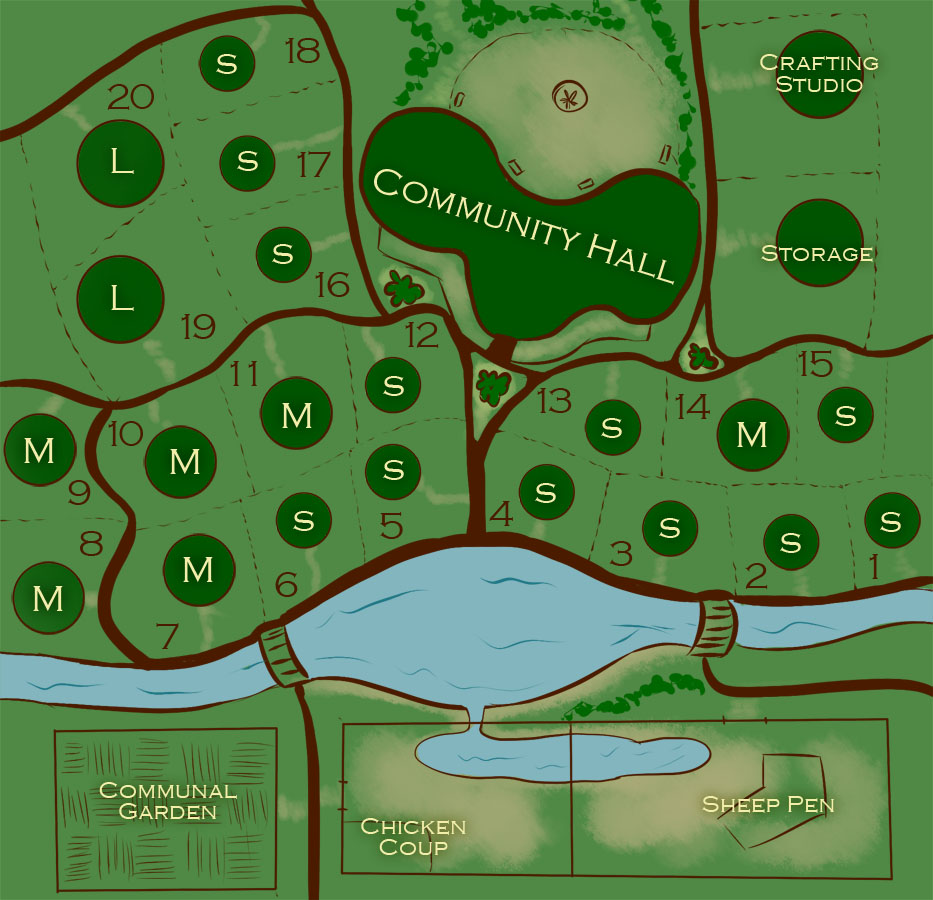 A lengthy construction project started by Kalypso Savoy prior to her ascension and a horrific winter, it was a new village constructed purely of mound homes that was meant to replace the dilapidated Chien Hotel as the main residence of the Court, located near the Les Champs d'Or. While lengthy in time, it seemed to have been a success in gaining the Court's attention and focus, completing the village before Fall of 2018. Should the need arise, there is still plenty of room to add more houses beyond the currently drawn map.

Typically comfortable for a smaller number of inhabitants, these are the perfect home for one to three canines. Four may be snug. Five and more will likely end in a lot of disagreements and misery.

A good home for a small family or group of friends. Five would be comfortable with the space, but any more may mean elbows will rub often.

A relatively large home that is suited to a very large family. A family of six will likely be very comfortable in the home. A family of seven may seem a little cramped, and eight plus would be cramped.

South of the port town, the Chien Hotel still stands; an old stone and wood hotel that has been actively re-purposed as a home for a large number of Courtiers. Part of the building has been severely damaged in the hurricane, ripping a tree from the ground, which fell and knocked out several rooms on the third and fourth floors. There are also a large number of common rooms that are barred from claims, as well as the storage rooms with free access allowed to members. The reception area greets those who enter the hotel; it leads into the pack's office - where records are kept and written. Stairs lie behind the small dining area to the east. Toward the west wing is a library with some shelves, tables, and vaguely-organized books tended by the pack librarian. To the north, the Court kitchen connects to the Banquet Hall -- which holds a grand ballroom behind a fold-out wall.

The central numbered rooms of the second floor are claimed for the pack's general storage. The three rooms overlooking the entryway were converted into a royal suite for the current leader of the Court. Silvano Sadira currently resides there and is often found there when not out.

Many of the upper rooms were damaged by the hurricane, so canines are hard pressed to find good rooms that haven't been knocked out or damaged by wind and water. They are, as a whole, more deteriorated than the lower floors.

Close to the northern border and the forested north, this old fishing town is located on the coast between cliffs and rises. The majority of the docks are still relatively intact, though the snowstorm from 2011 caused damage some of the houses, making them entirely unlivable. More damage that occurred during the 2012 Hurricane further ruined more houses and half the docs were obliterated. Many sea-side buildings are damaged, unless constructed of stone - though these are few.

Neither one of the previous tickle your fancy? There are plenty of other houses and small neighborhoods spread throughout the territory, though none are marked on the map. There are plenty of abandoned houses, though most are likely in a state of decay far beyond living quality. These are often more private as members are unlikely to simply be around unless you pick a location near something often visited, like the training grounds, the Hotel, or the town.