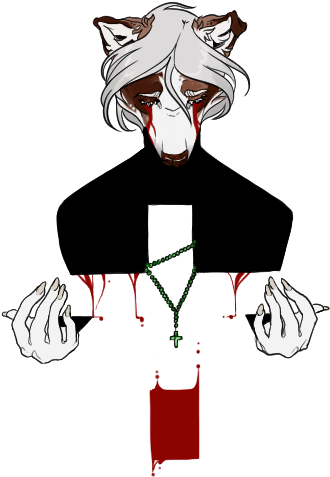 Basil Valentine Butler was the son of Aoves and Harvey Butler, born in Halifax. He was a Baronnet in Cour des Miracles and resided alone in a small stone house in Lunenburg before it's disbandment. He previously lived in Halifax as a loner with his best friend, Kofei McGreggor. He was formally involved with Valencia Catori romantically, but the two have seemed to have gone their separate ways.

Basil Butler is not an easy character to befriend; his actions are uncouth, he lacks consideration for others, and he is fairly narcissistic. The mongrel has no filter, and infrequently will keep comments (insulting or complimentary) to himself. He finds amusement in being purposely difficult, using overtly flirtatious behavior, obscenely inappropriate statements, or otherwise just downright rude gestures to elicit any sort of strong emotional response from an other. By influencing an emotional display, Basil feels like he has some control or significant impact on those he interacts with, which satisfies his dominating impulses and strokes his ego.

Though diluted some with age, maturation, and a closer relationship with his God, the mutt still has a tendency to use sarcasm and rarely feels any strong desire to form worthwhile friendships. He behaves rather childishly when given the chance.

Despite his bratty behavior and independent attitude, Basil is fearful of being alone and goes through occasional periods of depression. His outbursts are primarily used to keep people at a distance so he can prevent close relationships that would likely lead to him opening up, or the other party discovering his emotional struggle and illnesses. He prefers only a couple close confidants, and is very particular on who he allows to see him on such a vulnerable level.

Despite his dislike of regulated communities and his tendency to challenge authority, Basil hypocritically considers himself to be Catholic. He actively practices the religion through prayer, readings, and visits to the church, and has gradually become more devout as his life proves more emotionally demanding. Seeking guidance from his God and Saints, Basil has decided to study well into Catholicism, as well as dabbling in various others, so that he may act as religious support to others who require or desire his spiritual advice. He may also offer himself as simply a listener to those in need of repentance, though his personality may prevent some from trusting his confidentiality.