Serafina Amaranthe is the daughter of Semini and Lokr Revlis and sister to Siolene and Morholt. Just shy of her first birthday, Sera ran from home with a stranger in tow. Like Amaranthes of the past, she has left a wake of rumors and scandal with her abrupt departure.

After adventuring through the wilds of Nova Scotia, Serafina has finally settled down in New Caledonia.

Empathetic and compassionate, Serafina is guided by her heart more than good sense. She and her siblings were ostracized growing up in Onuba, and this formative experience is what led her to develop a protective positivity rather than cynicism. She doesn't want anyone to suffer like she has suffered. She doesn't always make the smartest decisions, but she tries her hardest to look for and appeal to everyone's best nature. Serafina is the type of person who is first to notice if someone is left out, and she will make a concerted effort to include everyone. It will distress her if someone lags behind or if someone is alone (even if they've chosen to be alone).

Inheriting her parents' offbeat sense of humor, Serafina is kind of a huge dork. She is shameless and confident in most situations, and it takes a lot to have an impact on her sense of self worth. She doesn't seem to care much if people write her off or find her embarrassing, as long as they aren't afraid of her.

At her worst, Serafina has little instinct for self-preservation, forcing others into a position of protecting her from herself or the situations she puts herself in. She can be stubborn, insistent, and difficult to reason with once she's made up her mind. She also has a hard time understanding people's boundaries, and needs to be firmly reminded over and over again.

Strives to bring the greatest benefit to the most people which causes the least harm
Will not want to lie or cheat anyone, avoids killing whenever possible
Group and order oriented, will keep their word
Upholds the rights of the weak and oppressed members of society

Open-minded and inclusive to almost everything, Serafina's only real bias is against religious or spiritual individuals. She is less likely to trust them, although she will seek to change their minds rather than avoid confrontation.

Serafina is motivated strongly by the desire to belong. She wants to carry her own weight and the weight of others—to a practical extent.

Her anxieties tend to circulate around ostracization and being alone. She can't stand the idea of someone being left out, herself included.

Although she does not smoke tobacco, Serafina is a big fan of both the medicinal and fun effects of cannabis. She also enjoys drinking, and is a happy, albeit a little too cozy, drunk.

A negative experience with the rigidity of faith led Serafina to develop an anti-religious perspective. She believes that doctrine is dangerous and that it hurts more than helps others. If she could wish away one thing, it would be religion.

Her own notion of life, death, and the afterlife is an odd organic nihilism — she believes that the spirit is part of the body, and when the body dies, everything simply ends and returns to the earth.

Serafina had just begun her apprenticeship with a healer before departing Onuba. This left her with the basics of field medicine and a few more advanced ideas, like sutures or cleaning wounds to prevent infection (albeit not in such modern terms). She is seeking a master to help round out her knowledge and practice.
Serafina spent her childhood helping her grandmother in the gardens of their estate. She knows the basics of cultivating gardens and loves to grow things; she is learning more about the local flora of Nova Scotia, and is seeking a mentor in this capacity as well.

Serafina was raised in Onuba, and thus has a moderate Spanish accent. She is fluent in Common (English), Spanish, and Portuguese, and can read and write in these languages.
Like any Onuban native, she loves to dance! She has great rhythm. Her singing, on the other hand...
Serafina was taught to sew, stitch, and embroider when she first shifted, as is tradition for Amaranthe children (in order to help them get used to their hands quickly). Knowing only the basics, she nevertheless keeps several bone hooks and pins in her belt bag, and scavenges threads wherever she can find them. 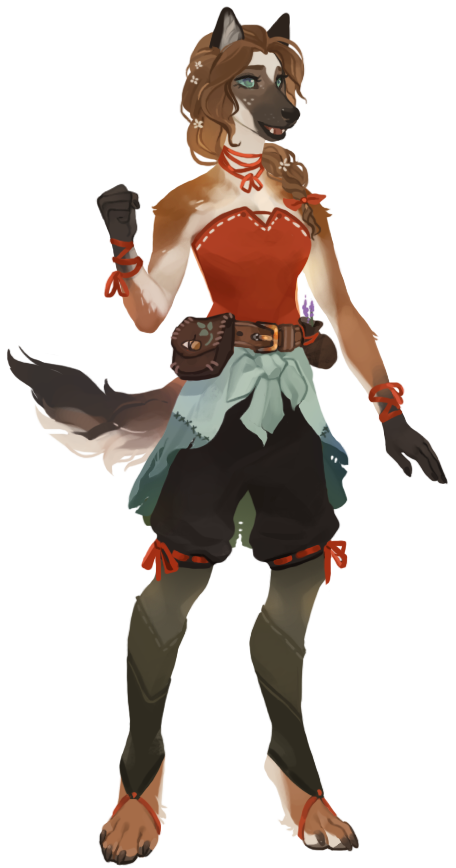 Serafina inherited the slender frame and hues of her father. Her fur pattern is reminiscent of an autumnal forest dappled in sunlight, and her eyes are a soft shade in the transition between green and blue. Her light brown hair falls just between her shoulder blades, although it is often loosely braided and woven with flowers, if the season allows.

She tends to dress for warm weather, leaving her shoulders and neck uncovered as her double-coat keeps her well insulated during the colder months. It's clear that Serafina also has a fondness for the color red, adorning herself with ties and ribbons of these hues, which she also makes use of in a variety of ways. Her outfit has been gradually reworked into one suitable for travel in the wilderness, although she holds on to the tatters of her old Onuban clothes for both sentimental and practical reasons. One never knows when they might need a makeshift sling!

Serafina does not have a commanding presence at all — you could easily overlook her, like a rabbit in the grass. She has an effervescent air that carries her through good and bad situations alike; even while "angry", she is non-threatening.

Please note that Serafina's color palette may be artistically exaggerated in her depictions.

Serafina belongs the Revlis, Amaranthe, and Lykoi families; as such, many of their members are directly and indirectly related to her.

An old human-made structure with a large tree growing through the middle of the front room. The ceiling has collapsed in this area, and the exposed portion provides ample light (as well as the other elements: rain, snow, etc). The walls are comprised of stone and brick, and much of the wood floor has deteriorated into the cement foundation, allowing for weeds, vines, and other plant life to flourish. There are three rooms in the back: a large bedroom, a former bathroom, and what was once a den with a fire place, turned into a kitchen space. These rooms do have cover and are better preserved than the front of the house, and strangely, the tree assists in blocking some of the elements from the roof on that side. Behind the house is a small plot, perfect for a garden or planter boxes.

The home was tidied by Serafina upon arrival, and they have re-purposed leftover furniture and other tools to make the spaces suit their needs. Sera and Terc share a bedroom like college dorm mates—beds pressed up against opposite walls, with their own corners of belongings.

A raccoon family occupies the tree. They coexist (mostly) peacefully with Sera and Terc.

Serafina was born alongside her brother and sister, Morholt Amaranthe and Siolene Amaranthe, in Onuba to Semini Amaranthe and Lokr Revlis. She had a mostly happy upbringing, with loving parents and doting relatives, including her aunt Akantha, grandmother, and many cousins. Despite this, Serafina and her siblings faced plenty of difficulties outside the Amaranthe estate; their older half-siblings Tiamat and Lotan created discord between the Inner Court families of Onuba after killing off the entire upper echelon of the Arena family. Their violence was blamed on the fact they were children of foreigners and raised on foreign grounds. As children of a foreigner themselves, Serafina and her siblings were thus cast under the light of suspicion, and there was no shortage of discrimination, from cold-shoulders to challenges to duels, and rumor upon rumor of their supposed propensity for violence and general unpredictability.

Serafina thus did not often participate in the courtly activities outside of the Amaranthe estate, but not for a lack of wanting. When Serafina finally found a friend in a young Moreno acolyte by the name of Isabel, she was over the moon. Isabel gave her a chance that few others did, at first under the pretenses of helping Sera "best her innate barbarism" and teaching her the ways of her faith, but a real friendship soon blossomed and eventually love.

This new relationship was cut short. Serafina found an injured Tercero Robles one night, and brought him to the secret sanctuary that she and Isabel shared for their meetings. She learned that he was a wanted man; his brother Dimas was addicted to gambling and in severe debt to the Moreno and Arena families. Dimas used his unwitting and law-abiding brother as a guarantor of his loans, and when Dimas fled Onuba, the repayment fell to Tercero. Tercero hid what his brother did from their family and made the payments at first, but he was eventually overwhelmed by them. Tercero was injured in the process of escaping their arrest.

After Serafina revealed his story to Isabel in an appeal for help, Isabel instead returned with Moreno guards. Serafina and Tercero were forced to flee that night, but rather than return to the Amaranthe estate and bring further shame and disgrace upon her family, they took off on a ship heading to the new world, where Serafina's brothers Calrian and Malik were said to live.

Serafina and Tercero arrived in Portland in the winter of 2020 - 2021. They were accidentally separated following a tense argument, allowing Serafina to run into her legendary older brother Lotan and Pazuzu Lykoi, and Tercero to find Tiamat. They were all reunited at La Estrella Roja in the summer of 2021. Finding that the way of life at La Roja was not what they needed, Serafina and Tercero left La Roja to join New Caledonia in August of 2021.

With Isabel Moreno. Serafina's grandmother passes away in the Spring. She meets Isabel and they become friends.

With Isabel Moreno. Isabel and Serafina are in love.