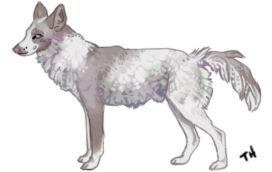 Ask Fylgja is the son of Stjarna Helsi and Loki Helsi, the Crone of Salsola. He was born shortly before the Inferni-Salsola War, during which he was kidnapped by a vengeful slave and subsequently taken hostage alongside his older half-brother in Inferni. Wishing to keep Ask from being raised a monster in the cruel Thistle Kingdom, Neith Heiwa pleaded with Dove Reverie to flee Inferni with the boy. Renaming him Gossamer Reverie to protect his identity, Dove fled to Cour des Miracles with Ask in late October.

Their arrival preceded the dawn of another kind of war, as a violent usurper seized control of the Court that winter. Though squirreled away for much of the pack's conflict, Ask nonetheless witnessed growing hostilities that culminated heinously in a public execution, and it was from these experiences that he began to form his own morals and opinions regarding leadership. Just as he was becoming a teenager, Dove died in a tragic accident, leaving the boy despondent. Shortly after her death, he departed Cour des Miracles and lived as a loner for a few seasons.

By some twist of fate, Ask later ran across his kidnapper, Silas Kasper. Taking advantage of the boy's directionless anger and uncertain memories, he convinced Ask that the pack he'd been stolen from was a cruel one, and offered to escort him back to Salsola to see this for himself. Though neither trusted each other, this was enough motivation for them to travel north together. Not far from Salsola, Silas pointed out Ask's father to him -- then killed Loki when he was distracted by his son's appearance. Traumatized by this, Ask fled.