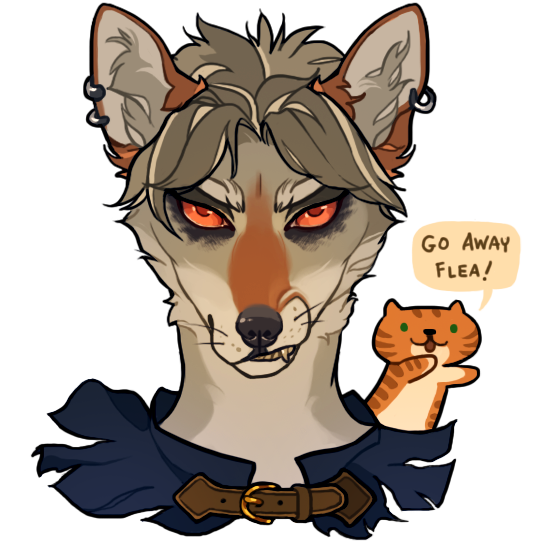 Jethro Lykoi is coywolf. He is currently a member of The Troupe, a band of loners living in Fort Cumberland.

The son of mates Antioch de le Poer and Versace Inferni, he was born in Inferni alongside his sister Adina during the spring following the Second Boreas Conflict. He has one living younger brother, Credence.

Jethro would remain a member of Inferni until the dissolution of the Clan following the Inferni-Salsola War. Too young to be an active participant, Jethro would nevertheless witness the violence and suffer firsthand when his home was burnt to the ground. Though he and his family remained with Inferni as its leadership and position changed, death and misfortune followed him. Following the death of his mother and disappearance (and presumed death) of his father, Jethro and his siblings disagreed with how to proceed and fought. Left behind when Adina and Credence abandoned the territory, Jethro joined The Cartel to remain with his former clanmates. However, as frequent instances of risky events began to unfold, Jethro's growing doubt in the group's survival would give him cause to leave The Cartel and Nova Scotia at behest of Marlowe de le Poer.

The pair traveled south as the winter stretched on, and while in Portland joined a small party being sent on a trading trip. This group worked their way southwest until they were unable to continue. Snowfall would see them delayed in Erie?, where curious events were taking place. These came to a fiery conclusion in no small part due to their group's interference. In the aftermath of the catastrophe, Jethro and Marlowe separated from the party.

They have since returned to Nova Scotia, and have most recently been "hired" by The Troupe.

The son of mates Antioch de le Poer and Versace Inferni, he was born in Inferni alongside his sister Adina during the spring following the Second Boreas Conflict. The early months of Jethro's life were largely uneventful. He grew up in a large family with many extended relatives. As a boy, he frequently got in (and out) of mischief, but did not experience real tragedy until the untimely death of his older brother Omar during the Second Boreas Conflict. The war that followed would prove to be equally terrible; and when Salsola eventually launched a surprise attack to burn down the D'Neville Mansion, Jethro was among those who survived the fire. He and his family traveled with the Clan when its new Aquila decided to abandon the territory. Not long after the coyotes began to settle into their new claim, Jethro's younger brother Credence was born.

What little peace they found was soon destroyed by his mother's untimely death. As his father began to grow distant from the family, Jethro and his sister began taking more active roles in raising their brother. Feeling the pressure of these difficult living conditions caused Jethro to grow up quickly, spearheading most of his focus into aiding the Clan and his family any way possible despite his rather surly attitude. This would not be enough to prevent the tragedies which followed, or the eventual disappearance of his father.

As conditions deteriorated within the clan and tensions rose, his siblings decided to abandon their home. Their timing would prove fortuitous; the following day, Vicira Tears would disband Inferni. Furious, Jethro found himself torn between two impulses -- to follow his siblings or to remain.

He chose to stay behind, believing they would eventually return, and joined the remnants of his clan. Towards the end of summer, the return of Marlowe de le Poer would complicate Jethro's life. Though he remained with the small group (now calling themselves The Cartel), Jethro's emotional turmoil proved susceptible to his perceptions of the group. Feeling exposed and unprepared to fully trust the group, Jethro was further isolated by outside influence. In early winter, he and Marlowe left the Cartel and Nova Scotia behind.

By the time Jethro and Marlowe reached Portland, no real decision had been made as to where to travel. Jethro was uncertain as to which direction his siblings might have taken, and no one in the Portland area recalled seeing them. Marlowe, however, was recognized by his kinsman Pazuzu Lykoi, a traveling healer and mystic who had long been in the company of other, familiar faces.

Though the more complicated history between Mara Savoy and Marlowe was unknown to Jethro, their conscription into her service became apparent soon enough. A long distance journey to procure promised goods seemed like a simple enough task. Their traveling companions expanded to include Tiamat's party – her brother Lotan, apprentice to Pazuzu, and Marlowe's niece, Rahab. The trip went well enough, though Tiamat and Marlowe often butted heads, and they made excellent time.

A blizzard (further enhanced by lake-effect snow) delayed them in Erie. Bogged down by impassable weather, the group began familiarizing themselves with the locals. In particular, one group of Luperci caught their attention. Suspicious of their behavior, after some discussion the party agreed to investigate. This decision would prove disastrous.