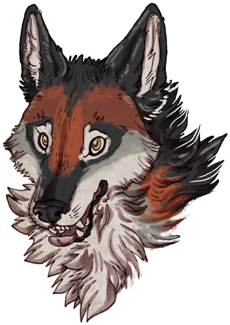 Tattersall Valentine is a member of Salsola, where he was born and raised.

The son of Morgana Revlis and Brocade Valentine, Tattersall was born alongside three sisters: Velour, Taffetta, and Intarsia. When the puppies were very young, terrible tragedy befell the family. While left in the care of their father's niece, Symre Rask, a childhood game would lead to a huge upheaval in their household. Intarsia was found dead and Symre blamed for the incident, an act which would lead to her banishment from Salsola. In the wake of this tragedy, Tattersall's parents closed in on their small family. There was a notable change in Morgana, something which saw Tattersall and his sisters often being overseen by siblings Sionann and Torin de le Poer.

Tattersall's youth was, aside from this, delightful. As the only son of his noble house, he was allowed plenty of freedom during his time as a Bambino. He had two notable childhood friends: Morrow Larue, ward of Salsola's Boss, and Azalea Eternity, a distant relative.

As Tattersall reached shifting age, his father began turning him towards combat training. This regiment and constant reinforcement of “Shield ideals” has had a lasting impact upon Tattersall. Following the completion of his Cueponi ceremony, an event which marked his transition into Salsola's adult ranks, Tattersall was gifted a horse.

Following an incident in his family home, Tattersall moved into his own residence alongside his best friend, Morrow, in the late summer of 2021.

He is currently undergoing combat training, and has most recently begun adding mounted training to his regiment. Inquisitive, mischievous, and a little cocky, Tattersall (often referred to by his favored nickname, Tate) is slowly climbing the ranks of Salsola in an effort to live up to his parents' expectations.