Mosie Winsor is the daughter of Tiamat Amaranthe and Griffin Winsor and sister to Owen Winsor and Landon Winsor. They were born on the outskirts of Portland in a simple but comfortable home. Between exciting visits from uncles and aunties and exploring their quaint and rural world, Mosie and her siblings enjoyed a warm and loving upbringing for the first months of their life.

It was late in the winter of 2020 when her mother vanished in the night. She and her siblings were raised solely by Griffin thereafter, with regular assistance from Rahab de le Poer, though she eventually left herself to find answers. This marked a turning point in the children's life. She began to share domestic responsibilities with her brothers, and when their father eventually relapsed into his alcoholism, the function of their household fell to Landon's shoulders. Without much guidance, Landon led his siblings to become involved with the underhanded ventures of a man named Cipher. They learned a few hard lessons along the way, and their struggle to rise above their circumstances only drew them further into the fray, leaving them but one way out: through.

Their entanglement with Cipher came to a head when beloved neighbor and friend, Simo, was killed in a fire. The Winsor children and a couple other companions fled town shortly thereafter, and their whereabouts are currently unknown. They tragically missed the return of their mother, who was brought home by Lotan, Pazuzu, and Rahab in the late summer/early fall of 2021.

Mosie spent most of her young life covered in bruises. She was a brash and reckless child with a big love of life, who was never afraid to speak her mind. It was difficult for her to focus on anything other than what she liked, which was mostly activity: running, swimming, hunting, and wrestling.

While Mosie is still finding her way through the world, events in her adolescence forced her to mature and grow. She is less inclined to take everything at face value, and though she continues to speak her mind, she has learned to listen too. She remains a bright and cheerful person by default, but that friendliness has been tempered by her experiences.

It's clear to anyone that she's a strong and hardy sort of person, and Mosie loves to dish as much as she does take it. Not a sensitive soul and tactless in the kind of way that can't be trained out, she struggles to comfort others, though not for a lack of compassion. Well-intentioned but clumsy, insecure folk would do best to steer clear of Mosie, whose sharp tongue can seem malicious more than the careless that it is. She does best with grizzled, hardy types, the likes of which can be found in tough professions; she is herself a wildling sort of woman, drawn to the natural ways and resilient in mind as well as spirit.

Her natural biases tend to be related to her attention problems; for instance, she can't stand people who talk too slowly or have long pauses in their speech. She will avoid getting into conversations with older people or story-tellers because of this.

Mosie is primarily motivated by the dire circumstances she's found herself in with her siblings—all she wants is to survive, and what comes next is anyone's guess.

As far as fear goes, other than the primordial kind, Mosie has attachment issues and a fear of rejection. Fiercely independent, she doesn't like to need others, and will accept loneliness over the risk of vulnerability. If she finds herself becoming too attached to something, she will pull away. These instincts are often at odds with her sense of loyalty and big heart, resulting in Mosie going off to hunt and returning when she feels better.

Mosie is young and hasn't explored this side of herself yet.

It's likely that this will be complicated part of her due to her fears and desires. She might settle for a string of casual flings to scratch the itch of loneliness, but will have a hard time bonding with others.

Mosie doesn't like the smell of smoke and is afraid to drink because of her father's alcoholism. She wouldn't say no to trying edible substances because she loves to eat and doesn't know any better.

She does have addictive tendencies, and will likely find something to self-soothe.

Mosie doesn't understand religion or spiritualism. She is confused by ideas of a higher power that she can't see or touch. Most religious people would have a hard time trying to convert her just because she can't grasp the concept (not to mention they would have to contend with her limited attention span). Mosie thinks they are weird, but will avoid engaging zealots because that means getting drawn into a long and complicated speech that would cause her physical agony to endure.

Related Skills: trapping, tracking
Possessing a high prey drive, Mosie loves to hunt in her lupus and secui forms. She can catch all kinds of small game, and with time and improvement, will learn how to take down large game. When she was young, Mosie would help to set traps for her neighbor Simo, though it took her a long time to understand the mechanics well enough to make her own. Her traps are crude and she often needs help from Landon to get them right.
Related Skills: boxing, blade
Mosie wanted to be brawler like her brother Owen, though she does not have the knack for it. She throws powerful punches but they rarely land. She can take a beating and has a resilient spirit. She has taken to carrying with her a small bone knife, mostly for fidgeting with, but she doesn't know the finer techniques of fighting with a knife. She just knows to stick 'em with the pointy end. Will inevitably learn how to throw knives.

Mosie is fluent in Common (English), and knows some Spanish. She can't read or write.
Mosie would help Simo with his farm, and through him she has learned the basics of taking care of his mule and chickens (when she wasn't chasing the chickens around). 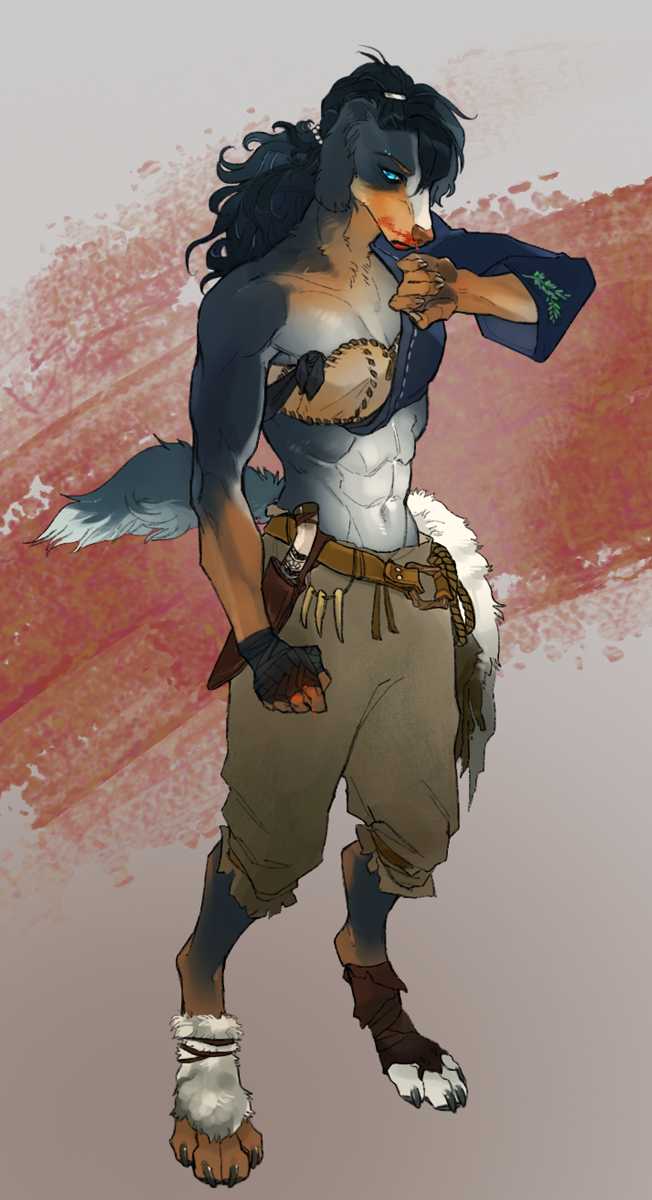 Mosie bears a strong resemblance to her mother, both in terms of her tri-coloration and athletic body type. She inherited the slender snout common to herding breeds of dog and the long spaniel ears of her Amaranthe bloodline, which she leaves loose rather than bound back. Her hair is voluminous and ocean-black, and when it isn't kept in a loose ponytail, it tumbles down to her mid-back. Bearing no real concept of feminine or masculine, Mosie enjoys decorating herself with shiny things like pearls, metal clips or earrings that can be worn without getting in the way of action.

She is humanized in most ways - she wears clothing and adorns herself wherever practical - but Mosie does not have a real preference for her two-legged form over her four-legged ones. Her high prey drive often lead her to shift into her lupus form. She has a dense build, carrying the bulk of her strength in her chest, biceps, and thighs, and a powerful sprint that gives her an edge on hunts.

Mosie has a casual, if not slightly restless energy, like lightning is buzzing just beneath the surface of her skin. Even while at ease she doesn't like to sit still, and there is always a part of her that's tapping or moving.

Please note that Mosie's color palette may be artistically exaggerated in her depictions.

Landon belongs to the Amaranthe, Winsor, Volkov, and Russo families; as such, many of their members are directly and indirectly related to him.

Mosie was born to Tiamat and Griffin in Portland along with siblings Landon and Owen.