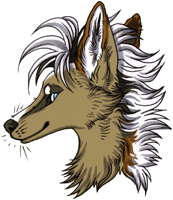 Kyrios Lykoi is the son of Myrika Tears and Vesper, born in Inferni.

Growing up, Kyrios was privileged and spoiled. The blood-born son of the clan's leader, he had the run of the land in many ways and the best of everything Inferni could provide him. He was the most rambunctious of his litter and quite arrogant as a child.

As an adult in Inferni, Kyrios appeared to most as a vain, lazy prince and a harmless, if sometimes annoying, flirt. He liked gossip and drama, but was almost never involved in any. He could still be quite condescending at times, though it became more subtle with time. But he rarely talked about himself, had no apparent interest in justifying his better-than-thou attitude, kept most people at arm's length, and did not seem to have ambition beyond doing as little as possible around the pack.

Following the razing of D'Neville during the Inferni-Salsola War, Kyrios chose to flee Inferni, rather than see it face its decisive defeat. Since the loss of his home, Kyrios has become more reserved, though this likely isn't noticeable to most, as he's generally upbeat, easygoing, and charming to strangers.

Kyrios is pretty vain about his appearance and hates getting dirty. He knows he's a pretty boy. On the surface, Kyrios is lazy, unambitious, and vain. He rarely volunteers his time or energy to others and often makes excuses to avoid duties he finds tedious, such as border patrol. He appears flaky and unreliable, often making casual promises he apparently forgets about immediately. A vivacious flirt with a side of muted arrogance, Kyrios is full of easy smiles, incessant teasing, and the occasional underhanded compliment. He's self-assured, confident, and employs sarcasm frequently.

He enjoys conversation and can carry on intelligently on most topics, even if he doesn't actually know much about it (often this involves flattering the other party into explaining to him, if he wants to know more about it). He is especially fond of gossip about other people's lives and relationships, though he is almost never directly involved. Indeed, he rarely talks about himself at all and is incredibly adept at steering other parties in other directions and convincing them (even somewhat unwillingly) to talk about whatever he wants to hear about.

Kyrios keeps most people at a comfortable distance and is content to let them think him a condescending fool. He enjoys positive attention only as far as it doesn't come with any expectations (so mostly he likes being admired for his appearance or other superficial traits), but is probably happiest when others regard him with dismissive annoyance.

Kyrios is actually quite sure of himself and has a great sense of his own abilities, but he doesn't like others praising him for them, or coming to have the expectation that he can always perform well at certain tasks. He is afraid of failure in many areas of life and holds to the idea that he can't disappoint others if they never believed in him in the first place.

To some extent, Kyrios feels that the women of his family are better than the men. Myrika's kindness, Vesper's dutifulness, and Vicira's ambition all intimidate him, and he feels that he has little to offer in comparison. He is content to support his family in their various endeavors (better yet, if they don't know he's doing anything to help) while having none of his own.

Kyrios is dedicated, though he is loathe to show it or admit to it. They are rare enough, but he keeps the promises he means. He avoids setting goals, but if there is one -- a real one he actually cares about -- he will pursue it tirelessly.

Kyrios was taught to read and write at a young age and remains reasonably capable in these areas, though he doesn't utilise the skill often. He sometimes scribbles notes to himself to track prey migration patterns or to remind himself of incidents or failures in his bow-making endeavors, but he doesn't read often. He prefers to learn by doing and absorbs knowledge much better through having a conversation about it than reading about it or simply being told.

Kyrios makes bows, arrows, and fancy quivers in his free time and has way too many of these, generally. However, quality is excellent and he tends to get attached to things he makes so it can often be difficult to convince him to trade them.

Dried and smoked meat, average-quality furs, and other animal products he also has in abundance. These he is happy to let go for very little. Sometimes he has trinkets, medicinal herbs, and other products he's accepted in trades but doesn't have much need for. These he's also willing to get rid of for fairly little. She was taken from Inferni's communal herd in October 2017 when Kyrios fled Inferni and has been with him ever since. Sweet and loyal, Zaku is very accustomed to long distance travel and riding, light pack-carrying, and game hunting. She's generally tolerant of other horses, but doesn't take well to being bossed around by dominant mares or stallions. Zaku will accept other riders, but only for as long as Kyrios is within sight and not in distress. She's very dialed into Kyrios's moods and will be more relaxed when he's relaxed and more skittish when he's nervous, etc.