Landon Winsor is the son of Tiamat Amaranthe and Griffin Winsor and brother to Rosemary Winsor and Owen Winsor. They were born on the outskirts of Portland in a simple but comfortable home. Between exciting visits from uncles and aunties and exploring their quaint and rural world, Landon and his siblings enjoyed a warm and loving upbringing for the first months of their life.

It was late in the winter of 2020 when his mother vanished in the night. They were raised solely by Griffin thereafter, with regular assistance from Rahab de le Poer, though she eventually left herself to find answers. This marked a turning point in Landon's life. He and his siblings began to share domestic responsibilities, and when their father eventually relapsed into his alcoholism, the function of their household fell to Landon's shoulders. Without much guidance, Landon and his siblings became involved with the underhanded ventures of a man named Cipher and learned a few hard lessons along the way. Their struggle to rise above their circumstances only drew them further into the fray, leaving them but one way out: through.

Their entanglement with Cipher came to a head when beloved neighbor and friend, Simo, was killed in a fire. The Winsor children and a couple other companions fled town shortly thereafter, and their whereabouts are currently unknown. They tragically missed the return of their missing mother, who was brought home by Lotan, Pazuzu, and Rahab in the late summer/early fall of 2021.

Compared to his brash and extroverted siblings, Landon is patient, quiet, and shrewd. He has a tendency to watch and assess before engaging in conflicts, and a knack for folding said observations into deftly crafted lies (perhaps an improvisor at heart). He has a deep and unshakeable sense of independence, making him a difficult target for manipulation and on occasion, basic compromise. He knows what he likes and what he doesn't, and is hard-pressed to give way until he determines for himself a good reason for it.

Presenting to the world a stoic and unimpressed demeanor, Landon can be an intimidating person at first. His edge is softened by the fact he is merely confident, but not always right. Consequentially, he must often devise ways of getting himself and his siblings out of self-created trouble. He seems to regard his failures without shame, and lives as if each experience is just another link in the never-ending equation of getting by.

His disregard for decorum comes not out of malice but out of an apparent pragmatism; the comfort of others is not his personal priority. He won't sugar coat the truth, or most things really. If faced with interrogation or simply asked a question he doesn't care to answer, he will walk away.

Landon will do what is necessary in order to take care of himself and his own, even if that means drawing difficult boundaries. He is ruthless in both the right and wrong ways, and doesn't care to differentiate the two.

Concerned with their own well-being and that of the group which aids them
Will only act maliciously against those who have tried to injure them in some way
Does not wish ill on those they do not know, but also does not care [if injury befalls them]
Will keep his word if in his best interest

Landon doesn't appear to feel strongly about most subjects, as he tends to roll with new information as it comes to light. The few opinions he does have, he keeps close to the vest. His siblings don't know he hates eating fish, for instance, and likely never will.

His primary motivation for now is simply surviving and ensuring that his family does too.

Like many who have been hurt, Landon is afraid of trusting others and being vulnerable with them. His natural skepticism is reinforced by the world he lives in; he doesn't rely on others to do or say the right thing, and he doesn't believe other people have him or his siblings' best interest at heart. For this reason, he won't trust anyone who comes on too friendly.

Landon is young, inexperienced, and has too many things on his plate to worry about romance.

It's likely that he won't be above flirting to get something, such as information or a better deal, but genuine attraction will only occur after forming a close bond with someone.

Landon has been smoking since he could hold a cigarette. He claims to be quitting when asked about it, although his siblings know this as a silly Landon lie.

He refuses to drink, but would be open to other substances if offered.

Landon hasn't been introduced to any religions aside from the casual superstitions of sailors and people in Portland. He wouldn't be indoctrinated due to his distrustful nature, but he also likely wouldn't have any prejudices or strong opinions about their beliefs. He is a "cool, happy for you" type about this sort of thing. Their religion is not his problem, really.

Related Skills: lying, manipulation, intimidation
Having been given the run around by some of the best con-people Portland has to offer, Landon has come to know the ins and outs of persuasion. He has a good poker face and a decent read on people, and observes others closely. His persuasive style relies less on charisma and more on perception, not unlike a magician.
Related Skills: Sleight of hand, tinkering, pick-pocketing
Landon picked up sleight of hand from his father, and while living in Portland, he would regularly practice in card games at the local gambling den. An engineer at heart, Landon also enjoys taking things apart and learning how they work, and has used that to get into places he shouldn't.

Landon is fluent in Common (English), and knows some Spanish. He can read and write. He's a good communicator despite not being a polyglot, and picks up on physical cues to understand what people want.
Landon isn't a powerhouse like his siblings, but a boy still has to watch his back. The heavy metal chain he carries has many uses, and cracking skulls is just one way to get out of a sticky situation.
Landon grew up on the outskirts of Portland. While his family relied mostly on trade once his mother vanished, he picked up how to lay traps from their neighbor Simo and would hunt with his siblings. They would fish using a rod and bait, seine nets, and hands. He can identify a few local plants and has general knowledge of how to grow and cultivate tobacco. 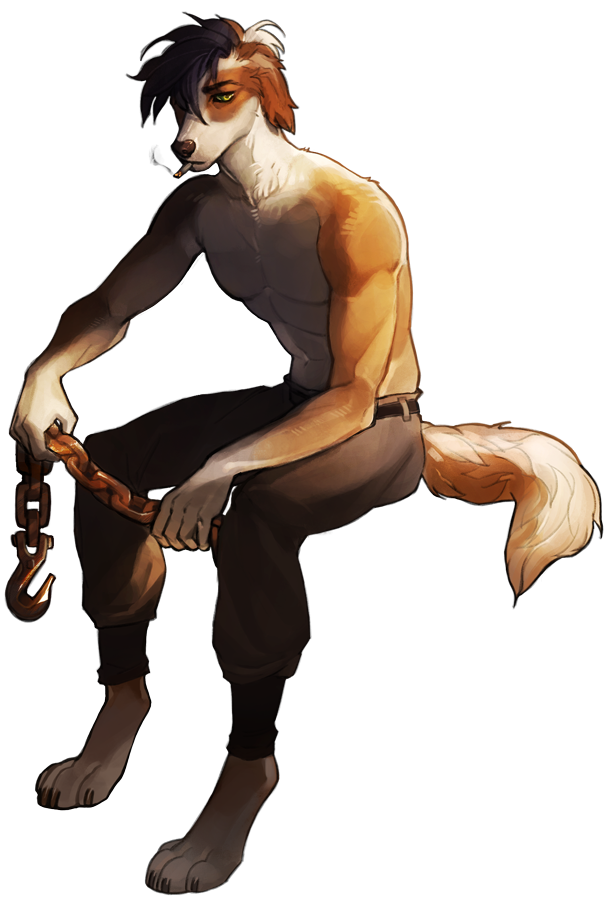 Landon has the calm appeal of someone who feels unimpressed by all that life has to offer. When not hidden by an unkempt haircut, the green-gold hazel of his sleepy eyes possess a discerning edge that betrays his otherwise apathetic demeanor. His posture is something to work on, often slouched or at ease even in moments of tension; despite this, he has impeccable coordination and carries himself with grace.

Landon has a naturally lean musculature, owing strongly to his father's roots. While his frame has the potential to fill out with age (just as his father did), for the duration of his youth it will likely tend to stay on the lankier side due to travel. The pattern of his fur is a fluid blend of the dark merle hues of his mother and the rich browns of his father, favoring neither side more than the other.

When in his upright form, Landon wears a wool sweater dyed with dogwood and blueberries to a deep, faded navy. Over this is thrown a dark sheepskin coat. His outfit is complete with a pair of trousers and a belt, upon which is affixed several belt bags, an unusual charm, and a hunting knife.

Please note that Landon's color palette may be artistically exaggerated in his depictions.

Landon belongs to the Amaranthe, Winsor, Volkov, and Russo families; as such, many of their members are directly and indirectly related to him.

Landon was born to Tiamat and Griffin in Portland along with siblings Rosemary and Owen.

With Griffin Winsor. Landon is making plans before the meeting with Cipher, and has a talk with his Dad.