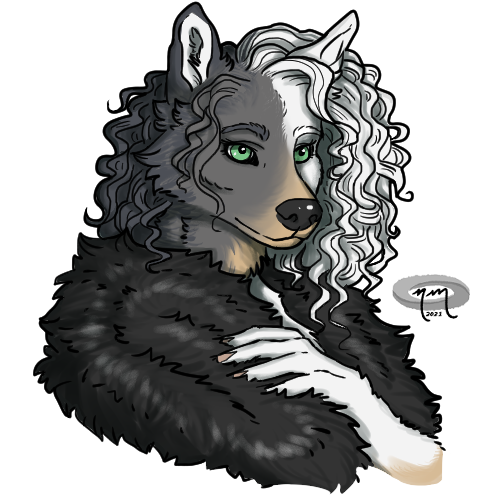 Azalea, first and foremost, is kind and smart and charming. She moves through the world looking to make people laugh and make people happy, and tries her absolute best never to hurt anyone. With a loud and brassy laugh, she is infectious in her joy, making everyone around her laugh along as though it were the easiest thing in the world. She is nevertheless very mellow in her demeanor, speaking relatively slowly, since thought is put into every word. She tends to have a little bit of a mysterious air around her, facilitated by her deep thoughtfulness, insight, charm, and imagination. She communicates in such a way that simply exudes warmth and safety and sensitivity, and she tends to make a powerful impression on those around her. She had a very solid sense of self as a puppy and was very charming, quick to make all kinds of friends with all kinds of canines. For a long time, she was also incredibly confident, the kind of confidence that you were born with. This was charming and cute to most, but for some, it was attractive. Aani broke that sense of self and confidence, leaving Azalea traumatized and nervous. Aani's emotional abuse and grooming (see the The Aani Problem) started at a young age (human maturity 13, nine months old), and predominantly revolved on convincing Azalea that she was an addict, that her family didn't want to see her, that they didn't care for her, etc.

She struggles with anxiety and depression, though how much of this is due to the events she experienced as a young girl and how much of this is due to genetics are unknown. Azalea started using drugs and was exposed to sexual grooming so young that she hardly had the chance to experience anxiety or depression before her first traumatic experience. She has intense feelings of shame and guilt, both over everything that happened with Aani as well as over her drug dependency. Worst of all, she has PTSD from the entire experience, but most of all Catalina's overdose. This is characterized by her thinking about it repeatedly, sometimes all the time, and experiencing extreme emotional reactions when reminded of the event. She will also experience flashbacks and have nightmares, though the nightmares don't necessarily have to be about the event itself. The PTSD has made the drug dependency even harder to get a handle on, since Azalea tends to engage in self-destructive behavior when she's at her lowest (e.g. after a flashback). Because of this, she tries her best to avoid talking about the event or Catalina's "death", and avoids Aani and (to some extent) her family.

She has always used a mask, carefully curated to fit perfectly. It was usually deployed pre-Aani when Azalea was exhausted from social interaction (she is an introvert, after all) and was forced to put on her polite smile and timed nods as actually paying attention to the conversation became too much. Post-Aani, however, it has been used much more frequently. This is in part due to her being constantly exhausted from social interaction from being so wired and depressed and potentially high. The mask is something that she wears when she can't necessarily be herself, either for fear of repercussions or because she doesn't have the spoons.

But besides her trauma, Azalea is an introverted woman who is nevertheless mostly comfortable entertaining company for a limited period of time. She enjoys making friends, so when given the chance she will dedicate herself to befriending interesting people. Once finished with their company, Azalea will usually retreat into herself, often by literally going off into the woods to explore and think. She finds that time spent alone is often more rewarding than time spent with others, with the exception of select few. When it comes to romantic partners, Azalea is sensual and excited to explore, as long as she is actually interested. A romantic, Azalea dedicates herself fully to her partner, thrilled by discovering new information about them, even the smallest thing, and simply enjoying their presence on a quiet evening. She is unafraid to express her love for someone, and feels it unconditionally. She can be disappointed if she feels like her partner isn't giving or can't give her the same in return, and can take that as a sign that they don't love her as much as she loves them. This is devastating to her, considering the amount of dedication she puts into her own romances. Azalea falls in love hard, but that doesn't mean she falls in love easily. Idealistic, she is often caught up with ideas of perfection and fairytale romances, when that simply isn't reality for most relationships. This means that often, she would rather not be in a relationship than be in an 'imperfect' relationship. 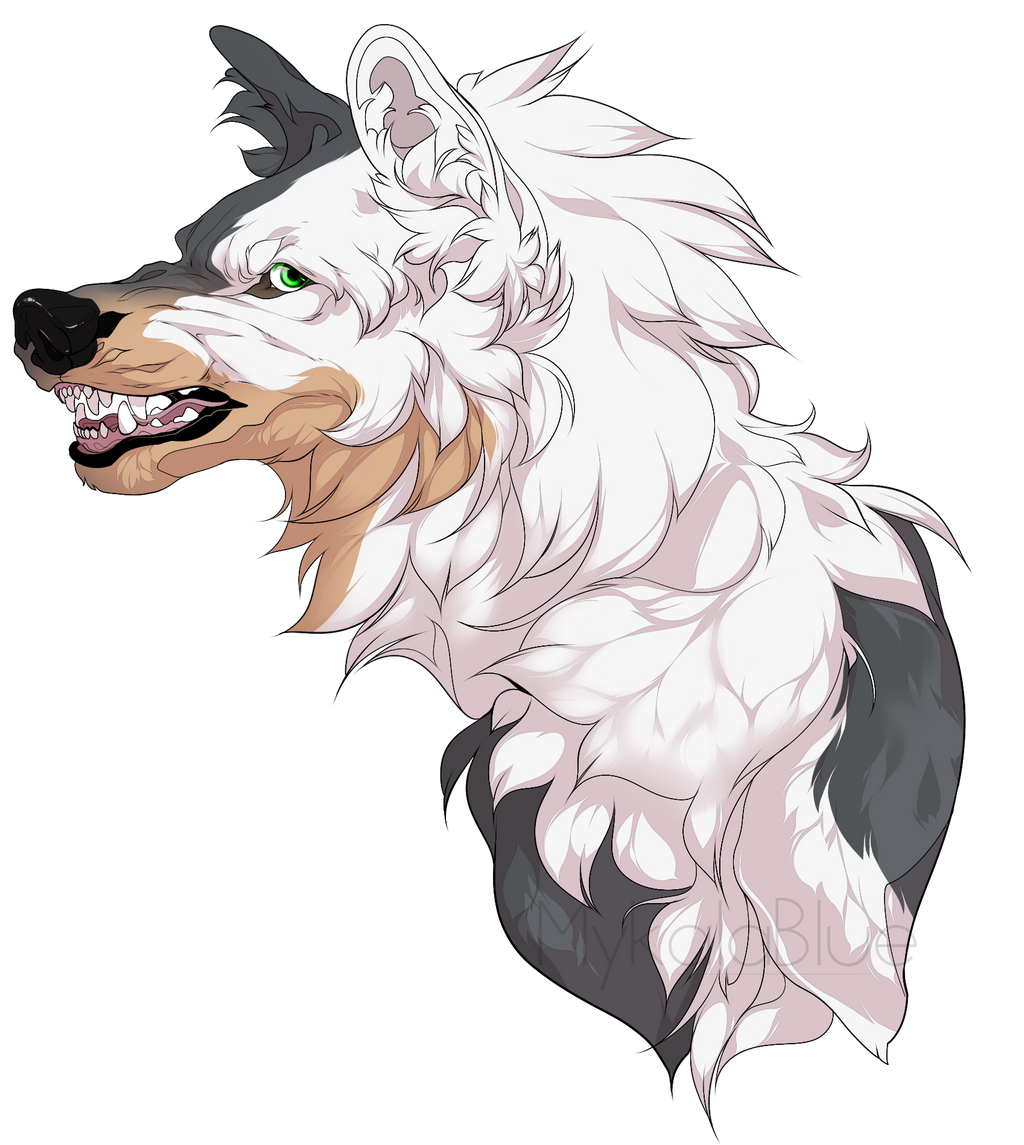 Azalea has epilepsy and experiences seizures with religious content. As an incredibly religious person, she treats the seizures as a religious problem, rather than a medical problem, and has yet to seek out proper medical aid for them. She believes herself to be chosen by the gods to act as a vessel through which they can send messages, and is training to become a religious leader in Salsola. The seizures themselves she calls 'shaking fits', excepting the focal awareness seizures, which she usually describes as 'moments of strangeness', not having the vocabulary to describe them more precisely. She is generally afraid of when the next seizure may strike, finding herself intimidated and fearful of the gods and the feelings that come with the seizure.

Tonic-Clonic Seizures: Tonic is the stiffening phase of the seizure, and comes first. Azalea's entire body will stiffen up and she will fall over, sometimes violently propelling herself into obstacles (e.g. walls) on the way down. Because her muscles clench, they force air past her vocal cords and can cause her to cry out. This is usually when she bites her cheeks or tongue. Her back and neck will arch and her jaw will lock completely (any attempts to open her mouth will fail). It is in this phase that she loses consciousness, right before the other physical symptoms start. The clonic phase is when the shaking begins. It is rhythmic and stereotyped (the same every time), with her arms and legs bending and relaxing at the hip, elbows, and knees. Her mouth will foam, sometimes quite a bit. Overall, these seizures last between 2-3 minutes, though they may feel much longer to anyone witnessing them. Afterward, Azalea will usually spend the next half hour returning to consciousness. She'll usually wake up for the first time within 15 minutes of the seizure ending, but will be confused and unable to communicate, potentially unable to move. She will then fall asleep again, and after a little while awake once more. This time she'll be in a little more control of herself, a little more awake. This cycle will repeat until at one point she'll wake up and feel practically normal, if not a little bit tired, and of course struggling with any injuries sustained during the seizure (e.g. bitten tongue, sore muscles from the seizure, bloody nose, etc.) It will take a while more for her to be able to return to normal, physically, up to a day. This is because her muscles are completely exhausted after the seizure and are usually very weak after the seizure. More information about Tonic-Clonic Seizures

Focal Onset Awareness Seizures: Azalea also experiences seizures that happen in only one part of the brain. The symptoms of these kinds of seizures change from person to person wildly, but for her, she will usually experience an out-of-body experience, and feel like she has two bodies. One of the bodies will suddenly get pulled out of her and start moving around, and this can happen in many different ways. Usually, the second body will rock, especially if she is lying down. Sometimes it will twist and distort within her body (e.g. her hips will feel like they are twisting, or her arms will twist and distort). Her vision will distort, as well. It shifts to the left, then flicks back in place, sometimes so quickly that it looks like the world is just shaking. However, she is conscious the entire time and can communicate (unless she gets overwhelmed and scared, but that isn't due to the seizure). Obviously, all of this is very overwhelming, and she will often sink to the ground and try to ground herself in reality by touching the earth. To a bystander, it may look like Azalea has collapsed, as she often will close her eyes to fight against the dizzying effects of her vision distorting. Otherwise, she does not pass out or convulse, and remains in control of herself the entire time. The seizures can last between a minute and 15 minutes or longer (though the longer ones may be several seizures happening one after another).

She experiences focal onset awareness seizures directly before tonic-clonic seizures since in those cases the seizure starts in one part of the brain and spreads to the rest. In this case, she experiences all of the symptoms above, but she cannot communicate and cannot tell that she is about to have a seizure. She feels as though her thoughts have slowed, and though she recognizes that something is terribly wrong (and often seeks help because of that), she doesn't know why. Often the symptoms that she experiences in normal focal seizures are aggravated. More information about Focal Onset Awareness Seizures

Myoclonic Jerks: These seizures manifest as shock-like jerks. They happen very often, usually in the morning, and only last a second. Her upper arms, neck, and shoulders will jerk up and back very suddenly but then stop. Usually, it only happens once, but rarely they will happen in pairs. She hasn't linked these jerks with the other seizures. If she is holding something, there is a chance that she could drop it. More information about Myoclonic Epilepsy

Roleplaying a Seizure: I recommend at least reading what I've written here before writing your post, and definitely feel free to ask me if you have any questions! If you've never seen a seizure and feel weird about writing one, focus more on what your character is feeling than what Azalea's body is physically doing as she is seizing. That is probably going to make a more interesting post to read anyway since Azalea has so many seizures and over time there are going to be many posts made where she has a seizure. If everyone writes about what exactly the seizure looks like, that would be pretty boring. But I've written the basics above, so definitely supplement your post with writing like: "Wolf let out a sigh of relief as Azalea sank back to the floor, only to feel his stomach clench in fear as her limbs began to flail and her mouth began to foam. He desperately wanted to scoop foam out of her mouth, but her jaws were snapping, and when he tried she bit him. Still, he was terrified she would breathe in the foam and choke on it."

So there's an example of how I would play someone who doesn't know anything about epilepsy or seizures trying to help Azalea. Do note that you absolutely should not put your hands (or anything) in the mouth of someone who is having a seizure. If you are worried about them choking, roll them onto their side so that the foam drips out of the side of their mouth. Again, if you have any questions or need clarification, ask me! :D