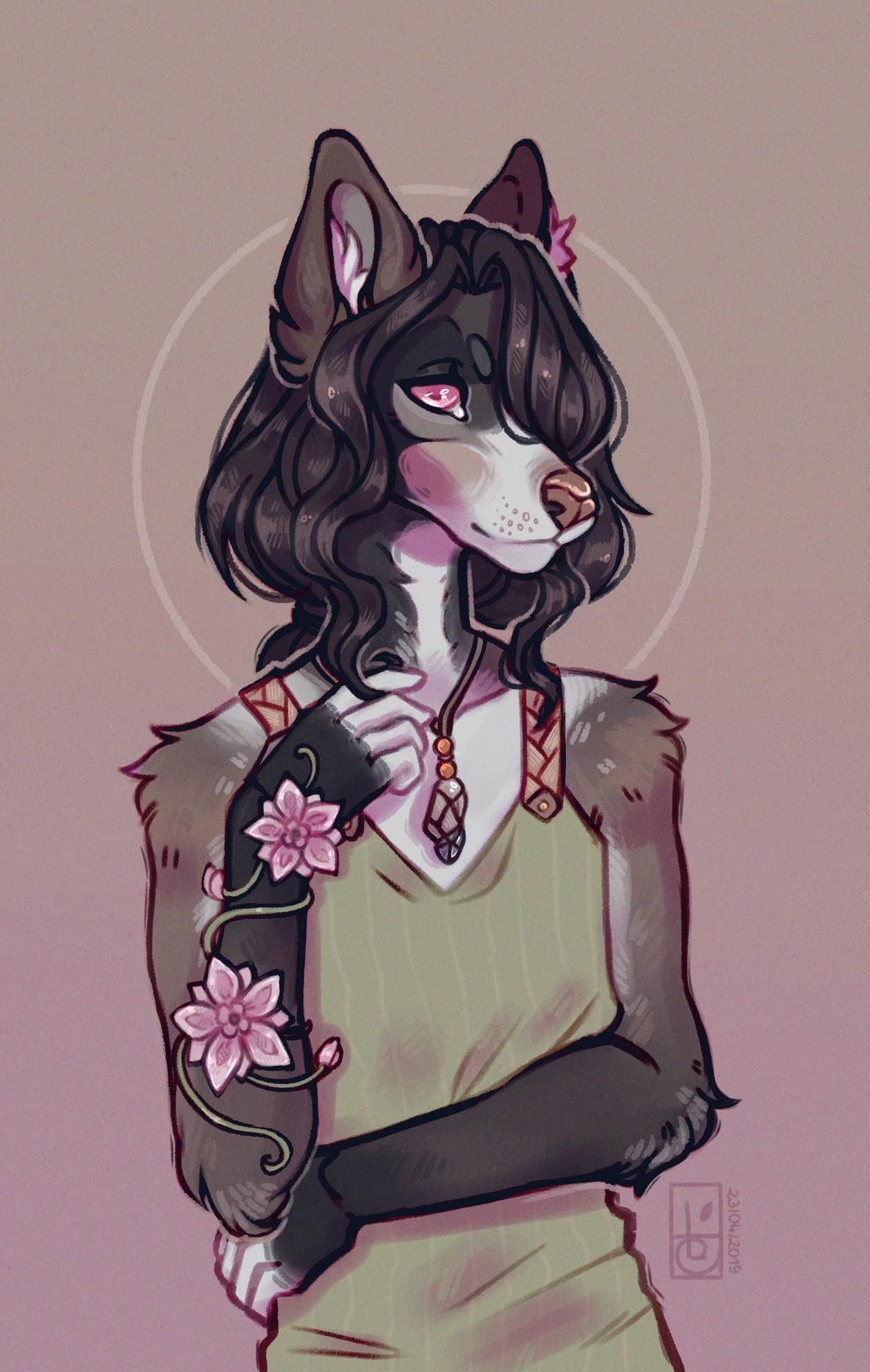 Eden de le Ulrich is a member of Salsola, currently ranked as the Cleric, the Healer for the Sanctus Tier.

Eden is the daughter of Faith de le Poer and Coaxoch, along with her sister, Evelyn de le Ulrich. When she was born, her mother suffered complications due to high amounts of stress during her pregnancy. Due to this, she passed away shortly after being able to see her children. They were brought to their father by her aunt, Dahlia de le Poer, and told him of Faith's fate. Eden and Evelyn were nursed by Calla Valentine while being raised by their father with the assistance of his mate, Sebastien Stone, and Dahlia. Unknown to them, Faith's spirit refused to move on, wanting to stay to watch over her children.

Despite the weird circumstances to her family, Eden had a relatively normal childhood. She had a lot of arguments with her father over the subject of her mother, it still being a sore spot for him to talk about. This made her feel frustrated, and looked to get her information from whomever would be willing to share it with her. She got her first taste of her mother's past when she and her sister snuck out with their aunt without her knowing. They came to the grounds of The Cartel, and Dahlia spilled that she was not happy in Salsola. They spent a night with the coyotes before going back home to Salsola, where her aunt was chewed out for them sneaking out.

It all finally came to a head when Eden became old enough to partake in her Cueponi ritual. Prior to meeting with Elphaba, during her first shift, Faith finally made her presence known to her daughter, finally knowing the identity of the female that visited her in her dreams. When she got her riddle, she knew her mother had something to do with it, and finally got a long break down about Inferni from Andrew Winthrop. It was with this information that she was able to pass her Cueponi and begin her climb in the adult ranks.

Since becoming an adult, Eden had grown a fascination with plants, especially the flowers that come around Salsola every spring. When Grievous Eternity came across her, the two saw this as a good chance to get her into learning how to heal others. She was happy to finally find something she could use to help the other members of Salsola, taking Grievous as her mentor. She has also seen the experience she had with her mother as a chance to try and connect with other spirits. She often found herself at the Blackwoods a lot when she was younger, and will still visit there as an adult. She can feel strong presences there, but one seems to stand out, one that she doesn't know who or what is causing it. It makes her feel a bit on edge. Her mother had been the cause of a few bad experiences, and cause her emotions to go unchecked, but it is something she worked on.

Since taking up the mantle of healer, Eden had assisted her teacher with minor injuries, as well as getting help from those like Argive Hemlock. She helped Kaeli Blacksun when she was having her children with Shaamah. The event had caused Eden to become wary of assisting others with this since it traumatized her. During the Curse of the Sanctum conflict, she helped to take care of members that returned to Salsola with injuries when they had killed the Outsiders, as well as brought home the prisoners. She lent a hand to Aani Aston-D'Noires when she was in a high amount of distress. She was the first person she became a sponsor for to Salsola.

With enough time and diligence, Eden rose to the rank of Cleric, serving as Salsola's ranked healer. Much of her time was spent taking care of those in the kingdom, even providing assistance in healing during the Curse of the Sanctum. It wasn't until Saturnalia that her life began to take a new turn. Aani had been making advances on her, ones that were not reciprocated, and aided by a fuel of jealousy of Lyra Salcedo caused her to take action. Eden's drink was drugged and she was tricked to sleeping with Aani, which resulted in her pregnancy. Although she had taken to avoiding the other woman, Elphaba eventually betrothed the two together at Aani's request. Duty filled, she agreed and was soon married to Aani sometime after their children, Deirdra de le Ulrich, Catalina de le Ulrich, Arius de le Ulrich, were born and grew up.

Eden continues to faithfully serve the members of Salsola, curing them of their injuries and illnesses. She works had to balance her duties and make enough time to spend with her family. She keeps most of the problems she has in her strained relationship with her wife behind closed doors, simply making every effort she can to make her happy. That's what she deserves right?

The eastern most of the four watchtowers at the four points within the Ruins. It has a brick and stone exterior, especially to the tower itself with ivy growing along the eastern side. The tower itself is connected to a larger living space that has had part of it turned into a storage space. There is no need for the stable space as Eden does not own a horse. The interior of the tower is primarily wood, specifically cedar and teak, and uniquely constructed with a complex and intricate wood-only joinery system. The first floor of the tower contains a hearth and space for cooking as well as access to the living space and storage. The living space holds a strong scent of flowers and drying herbs. It contains a table and chairs, furs along the floor for a resting space, and a spot to the side for Clover. In addition to many potted flowers as decoration, there is an old skull from Inferni's borders with the Ulrich family symbol on it. The second floor of the tower has been made into Eden's bedroom with the third floor giving access to the roof. A straight and narrow staircase connects all the floors of the tower. The bedroom windows were fitted with wooden shutters.
Just to the side of the tower along the exterior of the home is Eden's personal garden. She grows herbs that are not common around Salsola proper or are in low stock. She also grows a number of flowers here as well as berry plants. She is continually adding to this space, and tends to it every day.