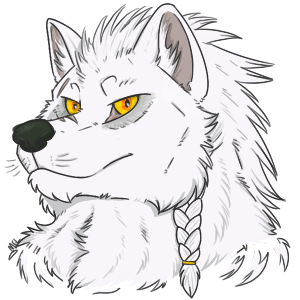 Grievous Eternity is a wolf and a high ranking member of Salsola, where he was born and raised. With knowledge of equine care and training, herbalism, first aid, and experience as a combatant, his skills see Grievous thriving in support roles.

One of the four children of Bane D'Angelo and Basilaris Eternity, elite members within their pack, Grievous was born into a life of relative luxury and expectation. He proved his capabilities while acting in defense of Salsola during the Second Boreas Conflict, after which he gained independence, though remained at home to aid and support his parents following their retirements. Their departure that summer, alongside that of his brothers, left Grievous struggling with his sense of identity and purpose. He was soon given this when he became a sponsor for Luigi Benedetti. A participant in a conspiracy that led to the Inferni-Salsola War, Grievous fought for his pack until the end of the conflict.

When his cousins took control of Salsola, much of Grievous' role within the pack began to shift. He journeyed south to Chesapeake Bay during that summer, where he informed the Benedetti family as to the sacrifice and service provided by their sons during the wars. While uncomfortable as a trader, Grievous' experience with horses and driving proved extremely useful throughout the journey.

Friendly with Idrieus, his aunt's adopted daughter and Salsola's Paladin, Grievous found excused to put himself frequently in her company. What began as a mild infatuation grew over time as the mutual attraction between the pair intensified. Grievous asked for Idrieus to be his mate early into the new year, and the two formally announced their intentions to wed that spring. Shortly after, Grievous was promoted to Ranger Apprentice, launching him into Salsola's Faction ranks.

Grievous and Idrieus were wed following a terrible winter, solidifying their union in the eyes of the pack. That summer, Grievous and his mate welcomed three children into the world: Azalea, Lilium, and Whisper.

Grievous Eternity was born alongside his three siblings in early May of 2016, not long after the fall of the Red Star. This event cast a shadow over their birth, made all the more concerning to his parents due to the dark colors of two of their children – an ill omen according to their ancestral beliefs. For the early portion of Grievous' life, however, there seemed to be nothing outside of the norm. He and his siblings benefited from their parents positions in the pack, including the ownership of a slave, one Heine Kaiser.

Of his siblings, it was Scourge who was first to shift. This sparked a competitive drive in Grievous to follow up with his own Cueponi ceremony, which proved harder than he expected. Around this same time, the sparks of the Second Boreas War were already burning – broken traps on the borders and other unusual events warned of the coming danger. A night-time attack soon followed, during which Grievous got his first taste of real combat. In a later incident, he would discover something equally horrifying – a fault in his father. Shaken by this, Grievous hastened to gain his own independence. The young man continued to live with his family, however, and aid them as much as possible. Grievous provided his support elsewhere too: aiding Idrieus in the construction of a training area, hunting, and gathering herbs.

His family support became more necessary as strange events began to go on: notably, what seemed to be Mandrake's inability to take on a two legged form and an equally mysterious sickness spread throughout the land, though it departed nearly as quickly as it arrived.

It would not be the only thing to disappear from 'Souls – not long after his first birthday, Grievous would be in for a terrible shock: his parents and brothers abandon the pack for parts unknown, leaving Grievous and Misery behind. While his sister remained in Portland, Grievous stayed in the Kingdom proper. In the months that followed, Grievous sought to better himself and his family name. He worked on improving his skills and took on the role of a sponsor for a new Associate whose elder brother had fought for Salsola during the Second Boreas War. His younger cousin O'Riley moved into his home in the early fall.

Their closeness, however, would soon prove dangerous for Grievous, who was roped into assisting O'Riley and their cousin Elphaba into framing her father for a crime not of his own doing. This event was among the many catalysts that would lead into the Inferni-Salsola War. As violence escalated, Grievous continued to do his part. He was notably responsible for the capture of Magpie Trouillefou, in the hopes that she could be exchanged for prisoners taken hostage by Inferni. Grievous was an active participant in the Battle of Drifter Bay. Unfortunately, the event would cost Luigi his life – one of the many losses Salsola would suffer.

By the war's conclusion, Grievous would realize several things: a growing interest in Idrieus, his own lack of direction, and the precarious place his involvement with his cousins would put him in.