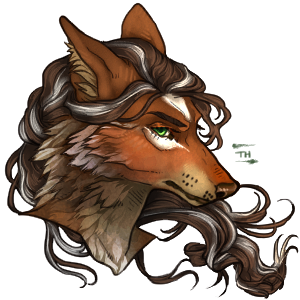 Avery Knight is the daughter of Isla Garcia-Knight and Drahnor Wolfe VI, whom alongside her brother Bailey Wolfe-Knight, are the sole children joining the Knight and Wolfe-Denahlii lines. The pair was raised in neutral territories on tales of Cercatori d'Arte and Casa di Cavalieri, while enjoying the balanced life of a loner living near Portland. when Avery got older she began to assist the family by scavenging for goods to trade at the outposts, and sometimes acting as muscle when needed.

After her first birthday, she left her family under the pretense that she would join her mother's old pack, Casa di Cavalieri. Only her brother was told about her real intentions to find her own place to make a name for herself away from her parents, or relatives, watchful eyes. After making her way to Nova Scotia, she joined New Caledonia where she remained for several weeks until being led from the pack life back to the life of a loner to hone her skills.

Several months, then just short of a year, passed with relative ease and she found herself part of a pack just outside of Nova Scotia where she honed her skills as a trader and scavenger. Eventually, she left said pack to return back to Nova Scotia. Not knowing what waited for her, she set her sights on finally making a name for herself with a small acru of riches she brought along with her and her horse.

Images by Nat and Mistrel-Fox