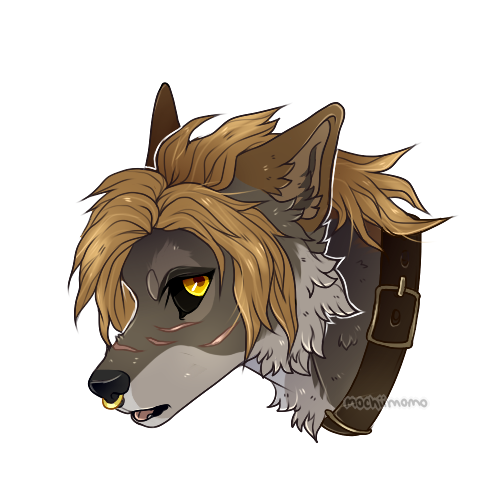 Silas del Morte is a member of Salsola, currently ranked as an Serf, a recently freed Servant.

Silas is the son of Wolfram del Morte and Tori del Morte. He was born on the non-luperci side of the del Morte family, and was having a relatively normal childhood. One day when wandering away from home alone, he was stolen away by hunters of Rabenuhr, where he was placed with other pups that had been captured. At first, he had been placed into the gladiatorial ring, but refused to fight. Tactics changed, but still he refused to do anything. Seeing as punishments were doing nothing to break his spirit, they resorted to slicing his tongue and burning the wound shut, not only damaging the inside of his throat, but making him mute.

When it became clear that not even this was enough to break him, the Ringmaster, Kruger Blackwood, hatched a plan. He offered the chance to bring Silas back to his home, and more importantly, back to the family he had been so adamant about getting back to. When the pair returned to the del Morte's home, Silas noticed that his parents had another child, his younger brother Liam del Morte. Kruger had convinced Silas that his family had moved on without him, replaced him with another child, and that he had nothing to return home to. Finally he was broken and returned to Rabenuhr. Unknown to Silas, Kruger had the whole event set up, and saw to execute the family once he had returned home with his prize.

Silas became an obedient slave, serving Kruger himself. He had been rewarded for his new found good behavior, even being gifted with the luperci virus to better make use of his efforts. He was given slight bits of freedom, helping out to care for other slaves in Rabenuhr and adjust new canines captured to adjust to their new lives. He was taught sigh language along with how to read and write to help with communication, taught how to use daggers to act as a killer for his master, and bred to be a night sex slave to buyers, but never as one to keep. He grew an unhealthy love for his master, and the Ringmaster showed affection back, if only to keep more control over Silas.

Master and slave eventually made their way to Nova Scotia to seek opportunity. It was here when they came across Salsola and Helena Troy Lykoi. What was meant to be business ended in tragedy when Kruger was killed by a group that was hired by Helena. She came at the last minute to kill the last member and prove her innocence in the matter. With his dying breath, Silas was given to Helena to bring back to Salsola, where he was made a Mendicant, a servant to all of those in Salsola.

While living here, he met Julia, and against Salsola's laws, had a litter of children. When the children were discovered by Calla Valentine, Julia brought them to Silas to hide. He was only able to hide one before the other two were taken away by Calla and killed. Silas hatched a plan to save the last child by masking her scent and presenting her to the Boss as an abandoned pup he had found along Salsola's borders. She was given back to her mother with protection from the crown, with the two of them hiding the true nature of their relationship to Twila a secret.

Silas became close to many members and families in Salsola. His rank changed to an Indentured Servant when he was gifted to Aidan, a reward for rescuing the Boss' own servant. The two saw it as good fortune, as Silas had already been teaching Aidan about social cues and how to better interact with others. Aidan held the remainder of Silas' debt, and upon feeling that he had learned everything that Silas could teach him, saw that his debt was paid. Silas was freed of his servitude, though chose to remain with Aidan so long as he was allowed to.

Silas works to adjust to his new life in freedom. He feel very lost due to his history, and tends to fall back into habit of doing anything he can to help others in Salsola.

A small home nestled among a collection of homes that collectively form the Blacksun Estate. It's just big enough to comfortably fit two people. The home is split into two main rooms, one lounging space and one personal living space. The lounge space consists of a fireplace, a small space off to the side to prepare items, and small decorations. Both males share the living space, though Aidan has more space, leaving Silas to claim a corner as his own. There is a small fire pit to the side of the home for outdoors cooking and cleaning, as well as a small space for storage.