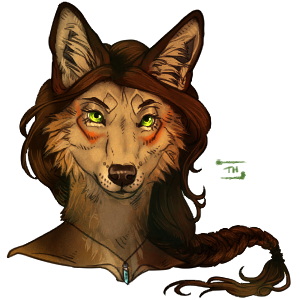 Lily Storm Revlis is the daughter of Clover Love Lykoi and Sirius Revlis. She is the only surviving child of her litter, but has two elder brothers from a previous litter, Lokr Revlis and Larkkin Star Revlis. She was born in the wilderness but was brought to Salsola during the first winter of her youth. Once she grew into adulthood, she chose to join Vinátta under the name "Iris Storm" to distance herself from her past life.

Following the Spring 2015 Flood Plot, Lily suffered from a bout of amnesia after nearly drowning in the Kennebecasis River. She was recovered by a group of nomads who took her in; during this time she worked to regain the simplest of motor skills, such as shifting, and struggled to remember her true identity.

While the truth of her identity remains somewhat shrouded in doubt, glimpses of her past will manifest in her dreams. Keen to piece together the fractured memories and reveal her true heritage, the coyote hybrid has once again returned to Nova Scotia.

Lily Storm is a rather independent girl with a strong heart. She tends to be bold and blunt, often speaking her mind without sugarcoating her thoughts. However, that is not to say that she isn’t truthful. She appreciates a dark sense of humor and can be rather sarcastic at times, which aids in her general aloofness. Despite her coy, gorgeous looks, there is some sense of strength in her soft feminine features - perhaps an embodiment of the Lykoi blood in her veins.

She has an appreciation for nature and what it can offer her, but her perception is much different than that of her mother’s. While it is clear Clover would be much happier bird watching, Lily would rather engage in more physical activities such as hunting. Although her mother disapproves of anything that involves violence or an adverse effect on the environment, Lily sees her prey as a gift from Mother Earth that should be enjoyed.

To be determined; acknowledges Mother Earth.

Lily was born 21 October 2012 outside of Nova Scotia, as the only surviving pup of the litter. Her birth occurred while her father was off in search of Ezekiel, so she grew accustomed to constant movement and a lack of settlement even from the beginning. Though she is living with her entire immediate family, their current whereabouts are unknown.