Canadian Arctic, Alaska and the northern parts of Greenland. 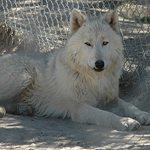 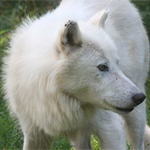 Arctic wolves generally have white fur, though they can be black, grey or white. Their coloration allows them to blend into their snowy surroundings. To help reduce heat loss, they have more-rounded ears, a shorter muzzle and shorter legs than other gray wolf subspecies. During the winter, the Arctic Wolf grows a second layer of fur for protection during the harsh conditions that may occur during the season. 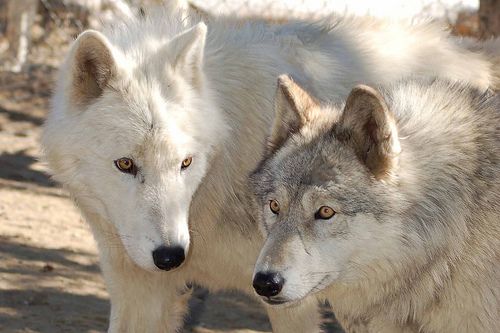 Arctic Wolves usually travel in packs ranging in size from two to twenty. Like all wolves, they are highly social creatures, and thanks to the harshness of their environment, pack life is nearly essential for survival. Pack territories may be huge to accommodate for scarcity of prey.

The Arctic Wolf is able to withstand sub-zero temperatures for their entire lifetime. They endure five months of absolute darkness in every year, and they are capable of living weeks without food. The harsh environment in which the Arctic wolf lives has shaped it into a hardy, capable subspecies.

The Arctic wolf relies on stamina to bring down prey, and will devour a kill until there is nothing left. Their primary diet consists of caribou, musk oxen, arctic hares, seals, ptarmigan, lemmings, and smaller tundra animals.

This wolf was one of the few subspecies that remained untouched by humanity -- even most Inuits lived further south than the Arctic Wolf. As a result, they are generally an isolated population -- Luperci Arctic Wolves are not extremely common, and almost none of these canines adapted to human lifestyles in their home range.

Luperci are rare in this extreme-north population; canines who have traveled outside of their home range in the Arctic are far more likely to encounter and come into contact with the virus. Wolves of other subspecies generally do not travel as far north as the Arctic Wolf lives; as many populations live on relatively isolated islands, it is entirely possible to find a pack of wolves living the very same way they have been for thousands of years.