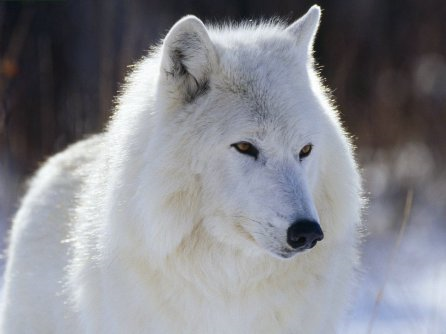 The Baffin Islands Wolf is the smallest arctic wolf, comparable in size to the Alexander Archipelago Wolf, ranging between 3.5 feet (1 meter) in length with an average of 2 feet (.6 meter) in shoulder height. They typically weigh between 30 - 50 pounds (13.6 - 22.7 kilograms).

The Baffin Islands Wolf tends to have white or lightly-colored fur; black and dark markings would make for difficult hunting during the brilliantly white winters. The wolf's coat is quite thick, an adaptation to the extreme region they occupy, and this thickness of fur makes it appear larger than it actually is.

They often hunt either alone or in pairs; they tend to keep smaller packs than most other wolves thanks to their extreme home region. Baffin Island wolves are omnivorous creatures and will feed on just about anything if they are hungry enough. However, their major sources of food are lemmings, barren-ground caribou, and the arctic hare.

These canines were endangered prior to 1988; after humanity died off, they flourished once again, and they are in no danger of dying off. These canines are relatively isolated from other populations -- they are primarily comprised of feral populations, with large numbers of non-Luperci. However, non-shifting Luperci may occur amongst them, insuring eventually they too will become primarily Luperci.