Coastal southeast Alaska. A large portion of them reside within Alaska's Tongass National Forest. They can be found on the mainland from Dixon Entrance to Yakutat Bay, and on all the major islands in the Alexander Archipelago except Admiralty, Baranof and Chichagof. Many of the wolves travel freely between islands, and their ranges may shift significantly over time. 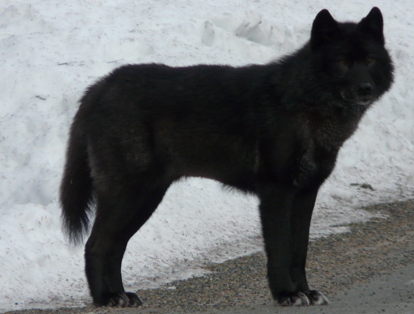 The Alexander Archipelago Wolf is a an Alaskan wolf, typically possessing short hair of a dark coloration. Black is an extremely common coat color, as are dark gray, dark brown, and other such shades; entirely white and lighter coat colors are not as common. Individuals from different islands in the archipelago have a propensity for different color phases, from pure black to combinations of black and white to a much brighter cinnamon color.

They are small wolves, typically averaging 3.5 feet (1 meter) in length with an average of 2 feet (.6 meter) in shoulder height. They typically weigh between 30 - 50 pounds (13.6 - 22.7 kilograms). This easily distinguishes them from other Alaskan subspecies, which tend to be much larger in comparison.

Alexander Archipelago wolves feed primarily on Sitka black-tailed deer; they are unique wolves in that they are the only North American wolf species to rely almost entirely on a single species for prey. It is estimated that an average member of the Alexander Archipelago Wolf species eats around 26 deer per year. Researchers have learned in recent years that some wolf packs also spend a surprising amount of time feeding on salmon.

These canines were not in very great danger prior to the destruction of humanity; though they lived in one of the more populated areas of Alaska, their interaction with humans was minimal. Following 1988, they expanded their range somewhat, re-including the areas that they had been pushed out of thanks to human settling.

Though it is possible there are Luperci among these canines, it is unlikely that such a population would be dominant, due to the isolation of this wolf's range. Certainly, humanized lifestyles would be difficult to nearly impossible for them to attain. Most of them seem to prefer a feral lifestyle, retaining their four-legged forms for most of their lives.