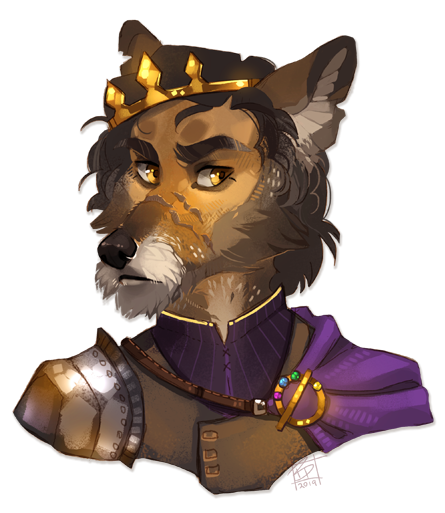 THANK YOU SAN FOR LETTING ME STEAL YOUR TEMPLATE ILU

Iomair was born to two high ranking members of the Aegas Clan in Old Caledonia. His parents were arranged from a young age to be married to one another – and despite this somehow were able to find happiness together. His mother, Grainne Nartholiel (born Grainne Ghealach of Lorn) birthed three children sired by his father, Tairnean Nartholiel. Iomair was the only one from the litter to survive into adulthood. A fever claimed the life of his younger sister and his brother was murdered after partaking in a feud with a neighbouring family-clan. Ever since, Iomair has focused on the betterment of his Clan and family, forging not only weapons but also relationships. The man has a knack with weapons, and despite his kindly expression can be known to be as stubborn as the iron his family is named after. He believes deeply in Dúr, the Iron God of his Clan, and carries a small metal talisman with him at all times.

In the wake of his parents deaths, Iomair married a woman from Taur named Vodeva and sired two children by her soon after. Indis and Solas grew up peacefully and well loved, though as they aged rifts began to form between them.

His homeland was set upon by renegade forces in late 2018. The Clans fought valiantly in an effort to drive them off but ultimately failed. Iomair participated in the fighting and skirmishes until he was brought before the Clan Leaders and was elected to lead them. The fact that he was forced to step away from his soldiers in order to lead still haunts him to this day.

Iomair believes in the power of tradition, but since being forced to abandon his home he has begun to wonder if there is a new and better way for them to live. After collecting what little remains of their livelihood, they have begun a pilgrimage to find new lands not devastated by war. The first concepts of New Caledonia are born as the refugees struggle to flee their war-torn pasts.

Iomair travels with his injured wife, Vodeva, and a Menel Scout, Tamlin Anor. He has sent the Scout ahead to ensure their safety and to find a place for them to settle. They have few belongings between them save for the clothes on their back and Tamlins companion animals.

Solas left before the war after an argument turned violent and hasn't been seen since.

Indis disappeared while they fled and Iomair fears that she's been harmed or killed.