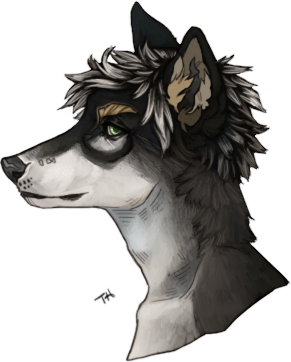 Sanguine Valentine is a member of Salsola, currently ranked as an Arbiter, a member of the Inner Ring.

Sanguine is the son of Syringa D'Angelo and Weaver Valentine, along with his siblings, Wisteria Valentine and Aurelion Valentine. He grew up along with his siblings at Salsola's Portland Outpost, Fort Preble. Growing up, he wasn't very outspoken, and didn't really make too much of an effort to stand out. If anything, he already felt like he stood out too much because of his natural looks. Everyone else looks like they belong in their small family except for him. This seemed to cause a rift not only between him and his siblings, but also with his parents. His mother, while not really caring all that much for any of her children, still seemed to at least favor his siblings over him, causing an immense desire to please her.

When the children became old enough, they made the decision to make their way to Salsola proper. His siblings arrived ahead of him, and was welcomed into the kingdom by Salsola's Paladin, Idrieus Eternity. He spent a fair amount of his early time assisting her with the upkeep of her library, not having anyone else that could lend her a hand. This fell into a daily routine, and he was rewarded for his work with the permission to borrow books to read on his down time. He still wasn't sure what he wanted to do with most of his time, and having his siblings around didn't always make coming to a conclusion, or life in general, all that easy.

He eventually found his calling with the assistance of those like Helena Troy Lykoi, Morgana Revlis, and Clementine Salcedo. Through their combined efforts and help, he was able to find his footing in the art of trading, creating partnerships with others in Salsola, like Clementine herself. Morgana had introduced him to Sawyer Cook, but his first real test of his skills came when the leaders gathered at Casa di Cavalieri for a Leadership Summit. He, along with a small group of Salsolans, set up a camp a small ways outside the borders to do trade with those that had come. The then War Lord at the time, Teagan Stryder, had been suspicious of them, but proved his skills enough to let it slide and get word passed around of their stand.

After being guided towards the direction of Salsola by Heine Kaiser, under his alias, Argive Hemlock had made his way to Nova Scotia, bumping into Sanguine along the way. One another seemed to strike up a mutual respect for one another with their social skills as well as keeping under wraps their true intentions and names. After a positive trade between the two, the man had come to Salsola proper, where Sanguine served as the man's sponsor. This was his first time ever being a sponsor, and aimed not to disappoint.

Sanguine continues to expand his contacts as well as his trading skills. He has had continued positive interactions with Cook as well as expanding his talents to members of New Caledonia and The Troupe. He continues to aim to please, and wonder if maybe he should make a trip back out to the Outpost sometime, even if only to visit his immediate family, being the only one of the three still left in Salsola proper.

A tower swathed in ivy, half-encircled by a crumbled stone wall that encloses a small yard. There is a small living space attached to the side of the tower, connected by a weakened door. There are pelts laid out in the center of the room as well as off to the side, serving as the main living space of the residence. There are a few shelves (usually with a couple books resting along them) here as well as a table and chairs to sit at, as well as for guests to relax in. In the main room of the tower, there is a hearth and windows with slots on them. The spiral staircase in the tower leads up to an office. Sanguine has improved upon this space from its former residents, having more papers, books, and a small amount of storage to keep track of some personal inventory.

A modest little shack on the northeastern edge of Millstone near the southernmost fringe of the Pine Barrens. The structure consists of a single kitchen and an add on room with a makeshift cot on one side and a creaky table and a few chairs on the other side where the single tiny window overlooks a small herb garden. The room is adorned with pelts and a homemade stone furnace with a stone for cooking and warmth. The worn old door has seen better days and could do with some reinforcing against the elements, as does the roof and the window which leaks when it rains.