Rafael Salcedo was born the second son to Eliseo and Leta Salcedo of Onuba. Once a Prince and renowned swordsman, Rafael became an exile for the supposed murder of his sister and a family ally.

Following a fight with rival Naenia Ortega that left him with a nasty infection, he was brought into Salsola to recover under the auspices of Violeta Rose Soul, a girl he had met on his arrival to Nova Scotia and with whom he was instantly enamored. Although it took some time to adjust, Rafael was able to establish himself as a reliable member of the Family despite his Outsider heritage.

As of the Last Supper in the summer of 2016, Rafael became officially mated to Violeta Rose Soul with the blessings of the new Crone, Loki Helsi. In late August, Rafael and other Salsolan delegates embarked on a trade mission to his homeland of Onuba.

The Salsolan envoy, including Rafael's niece Lilia, returned in the winter of 2016-2017 with goods from Onuba and Portland, but they were ambushed as they arrived back in Salsolan territory. This marked the beginning of the Second Boreas conflict. Rafael was an active soldier in the fight, but lost his right hand to Teman Forney while defending Elphaba Revlis, who in turn saved him. Following the war, Rafael fell into a depressive spiral, though he continued to instruct his niece in swordsmanship.

His former pupil, Indra Winters, returned from her stay in Airgid Gleann and became a constant fixture in the Salcedo household. She began to coax him from his depression, and eventually took on training with his niece. When the Inferni-Salsola War broke out, Rafael's niece became involved in the war and suffered her first failure as well as her first success. This allowed Rafael to make the decision to retire from active duty, and begin a family with his wife. They subsequently moved to the Salsolan Outpost and had three children together, Casimir Soul, Nymeria Soul, and Rhaegar Salcedo.

After their children were well and grown, Rafael and his wife Violeta set sail to Onuba at the request of Rafael's brother, Salvador Salcedo. None of their children elected to go with them, preferring to stay with the Thistle Kingdom.

Rafael was a resilient person who was forced to grow in difficult circumstances. By nature he was private and reserved, preferring to quietly pursue his interests rather than go against the status quo like his sister Lilia, or steal the spotlight like his brother Salvador. As they grew older, Rafael and Salvador were tasked with taking care of Lilia, whose string of sicknesses early in life had left her weak, and Rafael took to this duty to heart. He was blamed for the unfortunate circumstances of her death, an event that continued to haunt him for the rest of his life. Rafael was ever well-intentioned but too proud to refute the claims made against him, unwilling to run away despite the corruption of the trial. He allowed himself to be imprisoned, and it was only by Salvador's conniving that he was forced to escape Onuba prior to his trial. At his best, Rafael was responsible, self-effacing, loyal, and held a strong sense of duty to the people he cared for, even when it came at his expense. At his worst, he was a conformist and self-involved, only rising to challenge or defend a person or cause when something personal was at stake.

Acts as personal code directs him
Will adhere to the laws of the area he is in and will also maintain his own sense of honor
Will not break his word or a contract
He will never kill for pleasure, only in self-defense or in the defense of others

Rafael was raised in Onuba and internalized many of their biases and prejudices, such as disapproval of non-luperci or primitive lifestyles. Rafael was also initially uncomfortable with homosexuality, despite his brother and later, his niece, being homosexual; in these cases, his love for the individuals forced him to broaden his understanding, and he became less intolerant over time.

He also had a more patriarchal perspective of packs/groups, holding the belief that men should be caretakers of women. He was gradually disabused of this line of thinking during his time in the highly matriarchal society of Salsola, where his superiors were all extremely capable and strong women.

All of these biases and developments went largely unnoticed by those around him, since he was an intensely private person and never openly expressed anything more than ambivalence towards the relationships or lifestyles of other people.

Rafael was mainly preoccupied with his duties as a Salsolan soldier and caring for Violeta. After meeting her, his fears tended to revolve around her safety or his own failure to attend to her needs. Yes, he was a simp for Vio.

Rafael was probably more along the asexual spectrum. He was mostly disinterested in sexual matters, although he had strong emotional attractions to others.

An extremely committed individual, to maybe an unhealthy degree depending on how you look at it, once he was with Violeta he was devoted to her entirely.

A teetotaler with little trust for substances other than alcohol.

Rafael was not a zealot nor particularly spiritual, but he had his own code of honor which he took as seriously as a pious disciple of religion. He mostly avoided Salsola's coven, neither understanding what they were about nor willing to mess around and find out.

Related Skills: Swordsmanship, weapons care, weapons appraisal, mounted combat
From a young age, Rafael was tutored by the finest court swordsmen in Onuban society. He is comfortable with a variety of blades and familiar with more weapons, but he preferred the long range and precision of a rapier. These skills were put to practical use through various wars and conflicts while living in Salsola; prior to this, he mostly competed in Onuban tournaments.

Rafael was raised in Onuba and is fluent in Common (English), Spanish, and Portuguese. He can read and write in these languages.
Rafael shared a close bond with his steed, Maximo, who was gifted to him by Thalia Amaranthe on his 1st birthday. He was experienced in most tasks related to equine care, with the exception of those requiring specialized study (e.g. farrier). 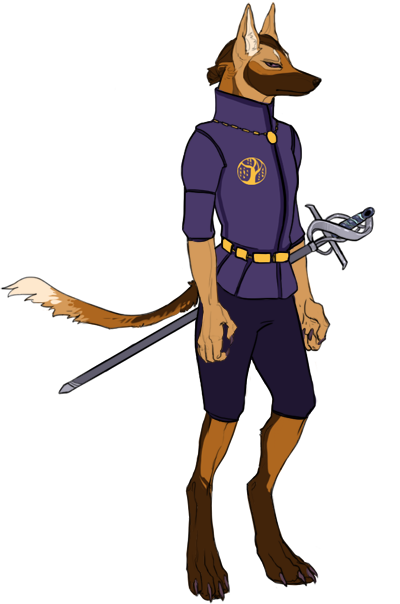 Balanced like a blade himself, Rafael's shape is overall sleek and hard-edged. His eyes are slender and the color a sharp purple, and his short-haired coat is a blend of earthy browns and light creams. His dark hair is kept in a tidy bun with the sides trimmed, something like an undercoat pony-tail. With tall, upright ears and a thin tail, he clearly resembles a blend of hunting and hound dogs. Well muscled and strongest in the chest and quadriceps, Rafael can cover great distances with relative ease and carries himself with a confident, graceful gait. He prefers a humanized form and rarely takes to his four-legged one, although this does happen from time to time.

Please note that Rafael's color palette may be artistically exaggerated in his depictions.

Rafael belongs the Salcedo family; as such, many of their members are directly and indirectly related to him.

The Eastern Watchtower was among a handful of ruins to be refinished in the modern human era, leaving it slightly more in tact following the apocalypse. The interior is primarily wood, specifically cedar and teak, and uniquely the whole watchtower is constructed with a complex and intricate wood-only joinery system. The exterior consists of brick and stone, though the eastern side has grown a large wall of ivy. Due to the lack of occupancy and care, some areas of the tower have suffered the effects of aging and weathering, although the durability of the wood has lessened these effects. There are three stories: the ground floor, which has a hearth for fire and passage to the stables and storage shed; the second story, which was repaired and now a bedchamber, and the topmost floor which provides access to the roof. A straight and narrow staircase connects all the floors. Fresh flowers are kept throughout the home, and drying herbs are hung around the hearth. The bedchamber windows were fitted with wooden shutters, though they are frequently left open to allow light and the breeze off the bay into the room.