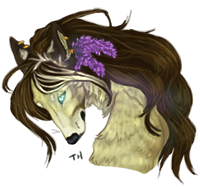 Syringa D'Angelo, born Claire de Valence, is the daughter of Wisteria D'Angelo and Aedan de Valence. She was born in Salsola alongside her littermate Delphine. She has three half-siblings, two on her father's side: Alistair Callow and Dagr Soul, and one on her mother's side: Odessa D'Angelo.

Syringa grew into a life of wealth and privilege in Salsola's remote outpost near Freetown. Under the tutelage of her father she learned the arts of both archery and trade. She returned to Salsola proper as a young woman, ready and eager to make her mark on the place of her birth. There she climbed the ranks and went on to sponsor siblings Bayani Grimm and Primrose Grimm.

In 2017, Syringa changed her name to honor her mother who was a victim of the Red Star. In doing so she effectively cut ties with her ruthless father who did not approve of her gypsy lover and attacked her when she spoke against him.

Devastated both by the loss of her mother and angered by her father's abuse Syringa and Weaver traveled to Casa di Cavalieri to seek the help of her bastard brother who had his own vendetta against Aedan. They made a deal: in exchange for Aedan's location and common travel routes, Alistair would never speak to or seek out Syringa again. No contact, not even closure. Some time later, Syringa learned of her father's mysterious death on the road and knew that her father's controlling influence was finally ended. She took Weaver as her mate to ensure his secrecy.

In the summer of 2018 she bore him three children: a daughter Wisteria Valentine, and two sons Aurelion and Sanguine . She currently resides in Salsola's Portland outpost with her husband.

Quirks, Gestures, Etc.: Syringa is prone to sideways and backwards glances and hyperaware of her surroundings, often to the point of appearing restless. Her ears are expressive and indicative of her moods. She flavors her speech with French phrases and words.