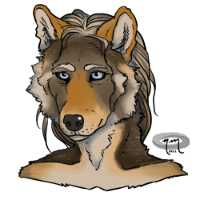 Soledad is an Honoured Elder in Casa Di Cavalieri.

After a devastating shipwreck in which she lost two of her grandsons, Soledad landed in the New World. She spent a winter adjusting to her new environment, travelled slowly north and finally came to rest in Casa Di Cavalieri. Due to her age she is not always entirely with it, but she's a hard worker, determined to be a valuable asset to her new companions. While physically, she arrived to Casa with only a satchel and a few personal effects, she has no shortage of emotional baggage due to her full and varied life.

Soledad is quite sure she had a comfortable life when she was a puppy. She has some memories of her family who lived, when she was young, in an old, abandoned village in the north of Spain, not far from the coast. Her extended family included a number of traders who worked crossing from the Iberian Peninsula to southern England and Ireland. As such, her family from time to time hosted a number of English-speaking visitors from whom she learnt that language. Therefore, her English includes British phraseology.
As a young wolf, she often travelled with members of her extended family, and lived a somewhat nomadic existence, returning home for stretches of time, but often associating with the multicultural and interspecies groups that could be met at ports and along trading routes.

Her eldest daughter took over when she stepped down from leadership. She has a son who became a loanshark with a troublesome reputation in Barcelona. She suspects he is dead.

Soledad was shipwreked somewhere on the East Coast. Her companions were lost, including the two grandsons she had travelled with. She took some items which were washed up on the same beach as herself and headed north. She did not expect to survive the winter, but she knew she couldn't face trying to return home.