After an on-and-off relationship with Inferni, Giza Ulrich-Reinhilde left for the last time in December 2013, leaving her family and friends behind. Giza believed she was letting her family down, and decided that it would be better if she left. Giza also sought peace from her overprotective sister Lorelei, but was not granted with it for long.

At the end of 2015, Lorelei found Giza staying in Freetown, and once she was found, there was no escaping from Lorelei after that. The two sisters remained in Freetown until April 2016, but managed to escape the red star's eventual wrath. They were tipped off by an old, superstitious Luperci, and Lorelei made her travel North-West with her, and sure enough, Freetown was then obliterated a few days later.

Eventually, in the next months to come, Giza and Lorelei were approached by their brother, Drystan who told them about a nearby pack where much of their family resided. The only catch was that the Overlord, Viper Arsenic Trombetta hated Coyotes, which made up much of Giza's heritage. Even after sending Drystan away and cursing his name with every magical German curse in the book, Lorelei brought Giza to join Mortimer. The only catch was that they had to lie about being mostly of dog heritage, and hide their scents to reflect the lies. It was a lot of work, but it was somewhere to rest their heads safely for the moment. 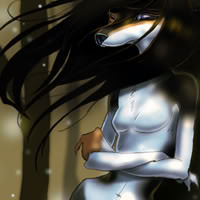 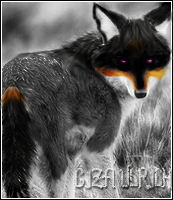 The definitive characteristic of Giza’s mild personality is her fear of being alone. She’ll cave to the desires of others in fear they’d otherwise abandon her, and she'll do practically anything to please those she wants to keep close. She is attracted to strong personalities – those who possess the certitude and confidence she so sorely lacks - and will shadow those she admires, trying to ensure she stays in their good graces.

Giza pines for romance – for someone to commit themselves to her the way she so freely commits herself to others, be it a male or female. This, in her mind, would finally mark the end of her battle to ensure she’d always have companionship.

In the absence of sure relationships in her life, Giza has acquired the habit of taking things. She thought it was better to be in the insulating company of objects than be entirely alone. Her habit of stockpiling knick-knacks has blossomed into a full-blown case of kleptomania. This affliction walks hand-in-hand with her sense of entitlement. After being labelled as a "princess" long enough, part of Giza began to believe the world owed her – at least in terms of shiny things at large and creature comforts. Despite this, however, she has a generally low opinion of herself and tends to absorb, if not enjoy, any cruelty sent her way, believing she is entirely deserving of it.

Giza has a habit of coming across far less competent then she is. She mumbles, stutters, and generally keeps her mouth shut in the company of strangers, always deferring to her sister to speak for her. On the rare occasions that she finds herself exclusively in trusting company, a happier, playful girl emerges. Fun and goofy, she has an insightful and charming wit, and an undeniable knack for self-deprecating humour and storytelling.

Entirely lacking in ambition, Giza is a content follower who lives to see others around her happy.

Giza doesn't believe in any deities or superior figures.

For as long as she remembers, Giza looked to her sister Lorelei for guidance. Lorelei was always the stronger-willed of the two, and it was easier to obey than argue. The two, along with their brothers Sascha and Izaak, were part of the same litter, but born of two different fathers, Cotl Van Ulrich and Marik Ulrich, in Leipzig, Germany. Giza's mother had a pension for intoxication and promiscuity, and was wildly abusive to her brothers. Giza's father was absent throughout this tumultuous time. Nevertheless, Giza and Lorelei were made aware of their names and appearances along with specific identifying details like Cotl's tics and Marik's tattoos. Learning from the harsh examples of Izaak and Sascha, Giza managed to avoid much of her mother's wrath, but could not bypass the string of harsh threats or a stray blow en route to safety. Despite the booze-fueled violence, Giza and Lorelei were loved by their mother, called by the German term of endearment "Prinzessin" or "princess".

Despite all her mother’s grave flaws, Giza loved her, and when she was mysteriously killed, Giza and Lorelei left Leipzig and joined Rechtsfolge bei Tod, the same pack that Marik and Cotl were born into. It was a tumultuous, terrifying time for Giza. Everything and everyone was new and she clung desperately to Lorelei. Her time among the ranks of Rechtsfolge bei Tod was not all bitter. She was schooled in stealth and slight of hand by the pack's elders as it was apparent she hadn't the capacity for combat or diplomacy. Given that she was regarded as expendable, Giza was often sent to observe rival clans and report back to her elders. Giza was just beginning to settle into her new life when it was determined both she and Lorelei were to be ejected from the clan due to their relation to Cotl, who was deemed impure. Unbeknownst to the girls, whispers about their tainted blood had been circulating since their arrival.

Giza took the opportunity to distance herself from her sadistic sister, calling on all her skills to disappear. It was an uncharacteristic act, which broke the unspoken order and trust between them, but one which she felt inescapable in the wake of Lorelei's escalating violence. She left for America in search of her father, pursuing rumors about a place called Inferni.

During her search, she met many interesting people, but even then she tended to keep to herself. She only came forth when she needed to find a new lead on her father, and any time that happened, her Kleptomania would flare up. She'd rob these helpful Luperci blind without learning their names or anything about them. Her first victim had been a stoner, who surprisingly had recognized Marik's name. This Luperci that smelled heavily of weed and cigarettes never knew what came. As he turned around to leave her, Giza lifted a shiny necklace from the back pocket of his sagging jeans.

Unfortunately, every lead she had come upon lead her nowhere and after two years, Giza began to feel as though the search for her father had been a wild goose chase. Ultimately, Giza decided to return to Inferni where she had met her Uncle Cotl in hopes that Marik would someday return and find her there.