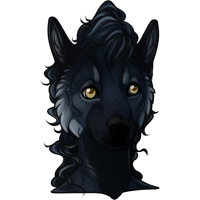 Constance "Con" D'Angelo was a member of Sapient from July to December of 2017. She is the daughter of Caprica D'Angelo.

Constance's body is draped in shades of gray and black. Her fur is medium length and she has the height of her mother and grandmother. A black arrow bridges eyes the color of sunflowers, a shade that she inherited from her father. Her fur is edged in a light gray color where one layer meets the next, giving her a frosted look.

Medium gray spots above and around her eyes emphasize her expressions, contrasting with the rest of her dark pelt. Varying grays and blacks cover the rest of her form, growing darker around her paws, chest, and the base of her tail. Four long, deep scars cross over her muzzle, a parting gift from her grandmother that never healed properly.

She stands at 6'5'' in her optime form and sometimes towers over other canines, but her submissive and subservient nature causes her to crouch and cower much of the time. In her home pack lower members were not permitted to shift into optime form, so she is wholly unused to caring for the long, curly mane that runs down her back. It is often in disarray, though she does her best to keep it clear of leaves and dirt.

Con will typically be found in her optime form, as she despises the lupus form, but she has not yet found suitable clothing and wears a ragtag ensemble of various items. 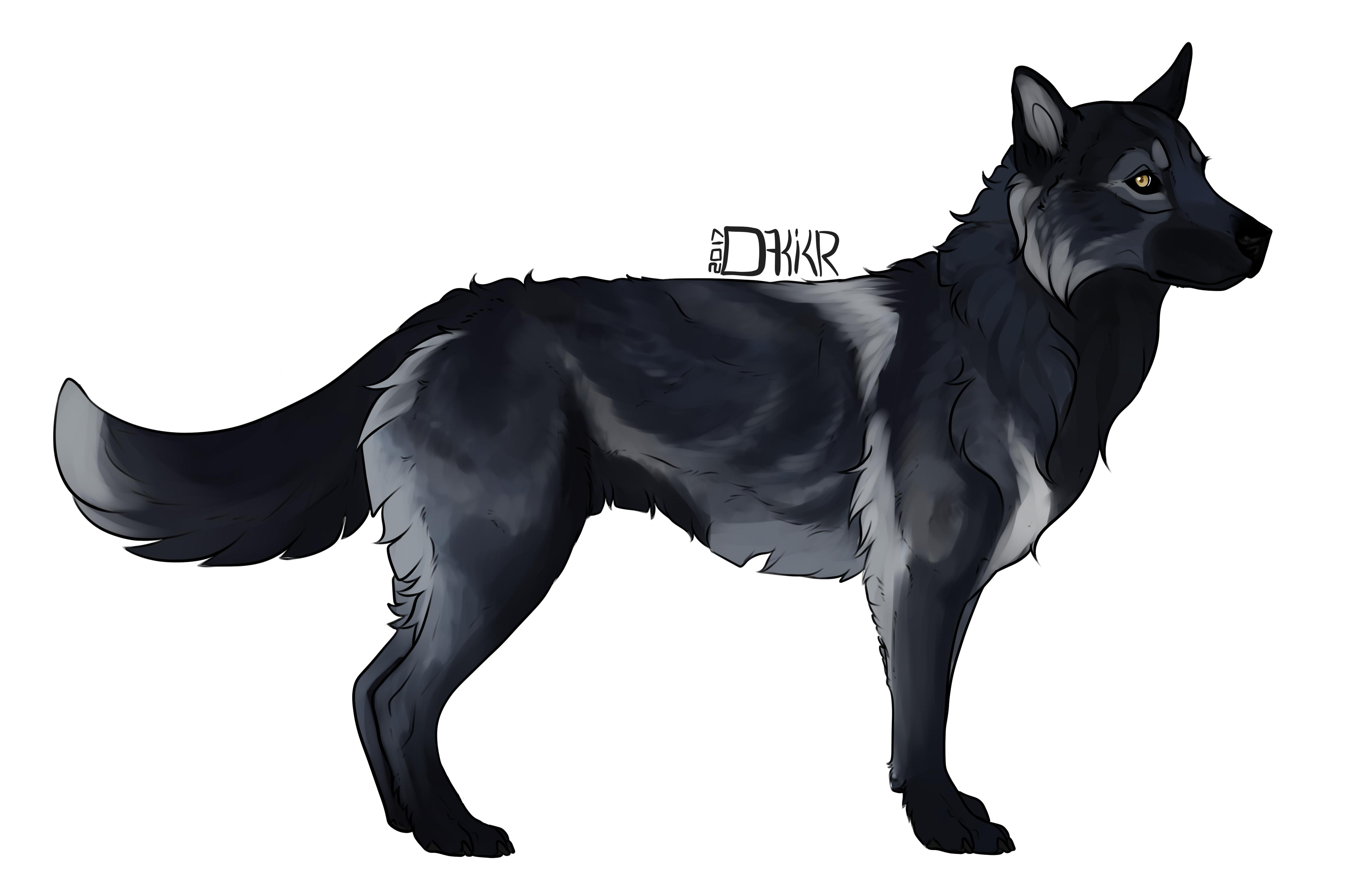 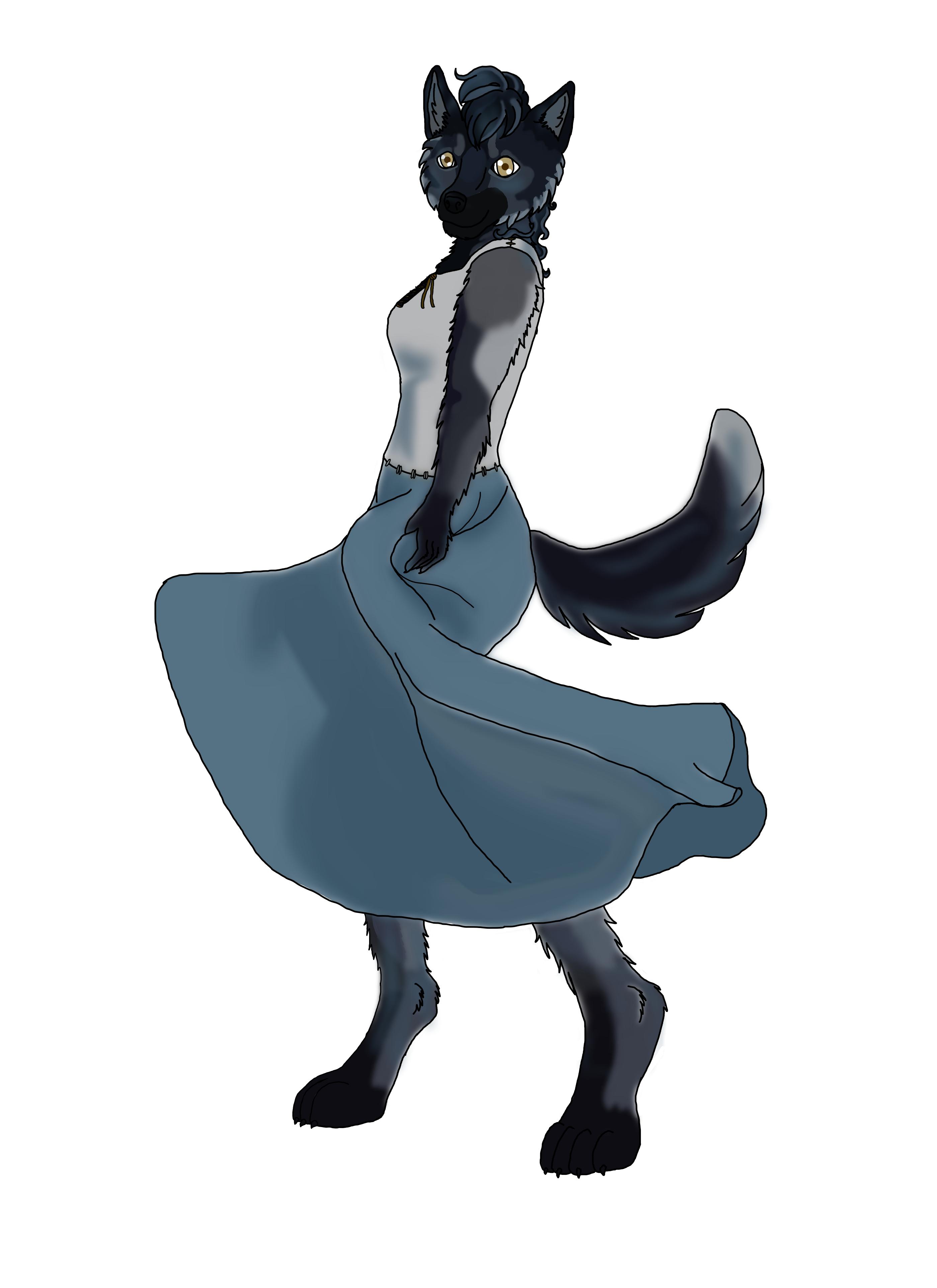 Constance is very quiet and withholding. She speaks when spoken to and is polite to others as long as they're civil to her. Those more highly ranked than herself are treated with the utmost respect, as she fears the physical punishment and confinement that she received in her past pack. She is not antisocial but does not seek out the presence of others due to her lack of understanding of social norms. She talks to herself a lot instead and often has a song running in her head that she will hum or sing softly, a mantra of sorts that helps her cope with the abuse that she went through prior to leaving the Astra pack.

Constance is kind-hearted and loyal to those close to her, but has issues with trusting others. She usually believes that other canines have some sort of ulterior motive when they approach her, as she was tricked and taken advantage of many times in the past. Not quick to trust others, she will sometimes lie or give false information about herself to try and alleviate some of the anxiety that she experiences in social situations. Always feeling that she isn't good enough and that what she does is not enough, Con is a very hard worker and is always trying to prove her worth to others.

Constance D'Angelo was born in the Astra pack to Caprica D'Angelo and a wayward loner named Christoph Lolette. Her birth was unplanned, and it was told that her mother tried to (unsuccessfully) rid herself of the pregnancy through self injury and plant ingestion several times before her untimely arrival. The only pup in her litter, Constance was treated with aberration and was denied the life of luxury that other members of the royal family received in Astra.

Ruled by her uncle Salem D'Angelo, his son Nyn D'Angelo and her elderly grandmother Naniko D'Angelo, the Astra pack was a place where bloodlines meant everything and pack laws were treated with absolute respect. Permission had to be sought before a wolf could choose a mate, have pups or even intermingle with some outsiders. One's rank came as a gift for obedience and loyalty, and punishments for misdeeds were extreme to keep the lower members in a state of fear and intimidation. Physical confinement in cages and caves was common in the pack, as well as group beatings or stonings for more extreme crimes. Her grandmother's twisted ways had infected the minds of the pack members as time went on, her harsh laws leading them to believe in and even revere this way of life.

In Astra, the highly-ranked members of the pack controlled other members through their ability to shift. Lower members and non-D'Angelos were not permitted to shift into secui or optime forms, kept in lupus form through intimidation and punishment. Another mark of their position was thick braided collars that they wore around their necks. The collars were used as a handle to grab the canine by, with a muzzle attachment that would keep them from being able to use their teeth in their own defense. The claws of members who had offended the royal family were filed down to nubs as well, also preventing them from being able to fight back.

Constance's father was not a member of the pack, and her mother had not sought permission from the leadership before choosing to mate with the handsome loner. This meant that she was born into the world with nothing but a name, and even that had been begrudgingly given. During her pregnancy Caprica was kept in confinement, which led to a mental break that extended into Constance's childhood. After her birth, her mother was released from confinement after a harsh punishment. This led Caprica to withdraw into herself even further, resenting Constance and treating her as little more than a nuisance. The pup was of D'Angelo blood, so Caprica could not kill her outright, but she made Constance's life as difficult as possible when she was not ignoring the child completely.

Growing up in Astra Constance knew that there was something different about herself that set her aside from the others. She had no father in the pack and questions about him were met with a pinch or shove by her mother, a nonverbal response that let her know it wasn't a subject Caprica was willing to divulge on. Tormented by many higher members of the pack, the growing female tried her best and always gave it her all, but rarely received a positive reaction from others. Over time she learned not to rely on other pack members for anything, and to keep to herself and her own activities. Constance became obsessed with fishing and hunting, the one skill that she naturally excelled in, and began to experiment with various types of traps and different hunting techniques. She did not work with others but followed packmates when they went on their hunts, observing from a distance and using that knowledge to her advantage while solo hunting and fishing.

When she came of age, her grandmother presented her with an arranged mateship as a way for her to regain some social standing in Astra. She would finally be allowed to shift, and stand on two legs. When Constance refused to become a mate to an older cousin, she was treated worse than ever. This directly led to her leaving the pack, as she had little to nothing keeping her there any longer. A skilled hunter, the female was able to provide for herself as she traveled the lands in search of a place to rest her head for good.