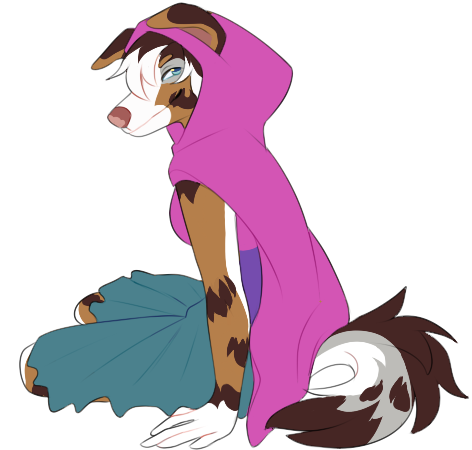 Kattegat Tarasova is the only child of Liuva Tarasova. She was born in Sonnerie and lived there for her entire childhood. She was raised by her mother and her mother's "mate", Kitsuke Arcanum. She never knew her true father, but her mother often told her that she was descended from the Norse Allfather, Odin. This gave the little girl confidence, and the strength she needed to grow into something extraordinary.

Currently, Kattegat is a member of New Caledonia, ranked as a Peers.

The belief that she was a daughter of Odin had caused her to learn to defend herself very early on in her life, though she still retained a rather innocent look on life. She learned most of what she knows from her adoptive father, Kitsuke. She developed into an intelligent young woman as she grew, and when she finally hit around a year old, she found herself feeling trapped and needing to learn what the outside world was like, seeing as many of their familiars drifted in and out of the group's mostly stationary territory.

Originally, she left without any word, but her mother was smart to have sent an owl to follow her young daughter, and once Kattegat got a hold of the creature, she sent word back to her mother, saying that she was not coming back until she saw the world. Her mother did not send word back to the child, but instead, she sent the boy who she grew up around, never did she know what his purpose was until she had been found by the man, and he begun to follow her in her travels.

She did not mind the company, and the protection he gave.

In their travels, she often used Vegard as a catalyst in many different bar fights along the way. He was always so eager to protect her, and she so eager to get the money or wares of a drunk man that she often would start things by stealing from others blatantly. Being the fighter she is, if she needed to rely on her own strength, she would, but she mostly relied on Vegard to clean up her messes.

The realization that she was a troublemaker made Vegard push their travels towards a land called "New Caledonia". Reluctantly, Kattegat joined the pack with him, where she now resides.

Artwork of these character(s) on this page is thanks to Dale, Nearferal@FA, Waymoon@FA, & Jmonster! Base Character Concept is by Dale and was given to and extended upon by Jmonster. Thank you all for your contribution(s) to bringing these character(s) to life!