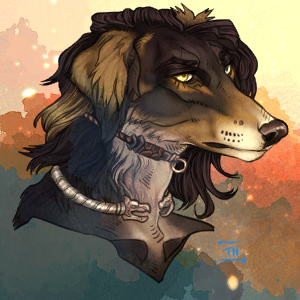 Vegard is the bastard son of Dullahan Eternity & Peregrine Huxley. In his early childhood, he spent a lot of time in the wilds, which gave him an appreciation for nature and the wilds. Vegard is very drawn to forests, and can easily be found in his lower forms, digging dens for himself, and hiding in bases of trees because of his deep respect and relationship with nature. Typically, he only wears clothing or finds shelter for himself if his little brother is with him, for he finds his brother to be slightly weaker than himself, and he pities his brother because of the perceived fragility of the other youth. Since most of his time is spent with his brother or other family members, instead of being naked and free like he likes to be, you can find him likely being overly dressed and hanging out inside buildings and tents like a "civilized" luperci. When he is alone, you can bet that he is probably gonna be a naked banshee wild-man.

Almost the entirety of his young life, he had spent with solely his brother and mother, who had been wandering the wilds in search of their father. His mother told him and his brother stories of their father, but despite her encouraging words, Vegard comes to detest his father for his absence, and often wished upon shooting stars that his father would come back so that they could all be a big happy family.

His wish was never granted.

Since his brother was the only other friend in his life besides his mother, he took it upon himself to protect his brother from harm. Often times, their mother would have to leave them for hours on end to hunt for them, which made most of his younger memories be of him and Kitsch. To entertain each other they often would practice making faces at each other until one or the other laughed, but also knew that they were supposed to be super quiet, so over time, they got better at both this and being silent.

He was very attached to his mother, and his brother, and when the unthinkable happened, something in his head seemed to crack just a little bit.

One morning in late winter (Feburary 2018), he and his brother woke up snuggling against their mother's cold body. They had not known she had passed away in her sleep overnight, and they try to rouse her, with no avail. It was only happenstance that their aunt came across them and took them home to their grandmama and their step-grandpapa, whom he and his brother were mostly raised by up until their adulthood.

When Vegard was just over 1 year, he left both his large family and his brother behind to wander the wilds, and possibly search for their father.

Needless to say, he did not find his father, but instead he came upon the lands of Old Caledonia, and with the coming winter, he decided to settle down close outside of the Taur Clan's territory. He was later discovered by Inuven Bata and his Lorn Lover after he had settled into their little cabin in the woods. From that point, the two figuratively adopted him, and while he still was an Outsider, when he was visited, he was told both about Lorn and about Taur.

The wars begun shortly there after, and in the wake of the war, Inuven takes Vegard and tries to bring him to a safe place away from the skirmishes, for he thought the boy too young to fight for lands that did not accept Outsiders. Vegard originally stayed in the safe-haven, but then armed himself with a sword, and rode out to the battlefield and fought for the Taur members, in attempt to earn his keep. He fought, valiantly, but at some point was taken down from his horse and stabbed through side. Vegard was lucky and his armor took the brunt of the hit, but once he tried to recover, he already facing the edge of a spear. He was saved by none other than the Lorn woman who adopted him, but before she could even say a word to him, she was stabbed in the back, and she fell.

Vegard got up and fought as hard as he could, after he watched one of the only luperci who cared about him had died before him, until he was hit in the head with a weapon and he passed out.

When he woke up, he was not on the battlefield. He was ushered a medic, and was then put under the care of Liuva, & Kitsuke. There, he healed, and he grew older, helping around their caravan until Liuva's daughter, Kattegat became of age, and the girl struck out on her own. Vegard — who owed his life to the Tarasovas — was sent off after the girl, where he was told to protect her from harm. Following her led him to Portland, where he heard of a pack to the east that had formed. A place called none other than New Caledonia.

Vegard currently lives within New Caledonia, as a Privileged.