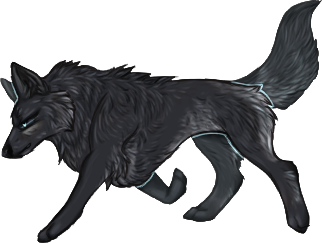 Woodsmoke entered the souls area in an attempt to find her mother. The wolf had just opened up to her daughter and gifted her with a name before disappearing. Finally accepted and then dropped into nothing, Woodsmoke searched until she couldn't go any further. From there she ravaged the mainland and peninsula, hassling two-leggers and eating small game. She's well traveled, but very aloof and ignorant when it comes to Luperci culture.

She is more in touch with her animal side than the more ‘human’ aspects that many Luperci show. Despite being raised in terrible conditions, Woodsmoke is rather playful; often playing with her food like cats do with mice they catch. To pass time and make things a bit more entertaining, she will make games out of catching and tracking prey. When she comes across folks, Woodsmoke is always careful. Her mother's disdain for strangers was certainly instilled in the woman, though not to the severity of her parent. If she does manage to let her guard down with a stranger she can be bubbly and joyful, though that can change on a dime should they upset or threaten her.

Woodsmoke is more than willing to steal food, and will do so readily if she’s hungry enough. Though she had not encountered many canines younger than her in her journeys, she has a fascination with puppies; now a mother herself she has already fulfilled her promise to be better than her neglectful mother.

It is difficult for Woodsmoke to fit into Luperci society, she was born to a wild woman and she herself became one. She tries hard to connect to the folks who wear clothes and speak words she doesn't know, but the wolfdog knows she falls short and probably always will. Because of this she recluses herself to the side, not fully in the swing of things, but on the periphery. She's not antisocial, just too different for the two-legger world.

Woodsmoke and her brothers were born to a Luperci Verto mother who was infected during the pups’ conception. Her mother hated the male who impregnated her, and also hated the pups she bore from him. However, instead of killing them, she raised them without care or love. She refused to name her children, rarely acknowledged them, and let them do whatever without warning them of danger. The pups were weaned as soon as they could have been, and fed only just enough to survive. The lack of care, guidance, and little food caused the death of one of Woodsmoke’s brothers. His death was a wakeup call for the pups; if their mother wasn’t going to care for them, then they must care for themselves and eachother. Play fighting was done less to bond, but to train. Together they searched high and low for food, scavenged corpses their mother didn’t find, and eventually began hunting prey together.

Soon after gaining some skill as hunters, her brothers left in search of their father, and perhaps a better home. Woodsmoke meanwhile stayed behind, and tried to get close to her mother. She would watch the older female hunt, and then employ the techniques herself. By watching her, Woodsmoke became better and better at hunting and tracking.

After months of being stalked by her daughter, Woodsmoke’s mother began trying to chase her her away. Telling her that she can fend for herself and thus had no need for someone who cared not of her. Woodsmoke, embodying one of the few traits she gained from her mother, was stubborn. She looked like her, smelled like her, they even hunted in the same way. It took a while, but Woodsmoke’s mother soon gave up on chasing her daughter away, and eluding her. It took even longer for her to accept her daughter’s help in taking down large prey like deer.

Though she did not care for her children, she eventually gained a respect for her daughter. Woodsmoke had defied the odds, and grew up into a strong, independent female; capable taking care of herself. Oddly enough, the older female began to feel a pang of pride for the young girl she brought into the world. With some reluctance, and a few stuttered words in the sentence, Woodsmoke’s mother eventually caved and told her daughter her name. “Basswood.” Soon after, however, Basswood left the area and hid her scent. Woodsmoke was unable to track her, only knowing the direction that she went: North East. Woodsmoke tried to figure out why her mother just up and left like that. Perhaps she had finally had enough of her daughter and made sure she could not be followed. The girl likes to think that Basswood couldn’t bear seeing her daughter and actually loving her, with how poorly she had treated her pups, and so ran away, so to not feel the pain.

After her mother's disappearance, Woodsmoke named herself and trekked on to the North East, winding up in Souls.