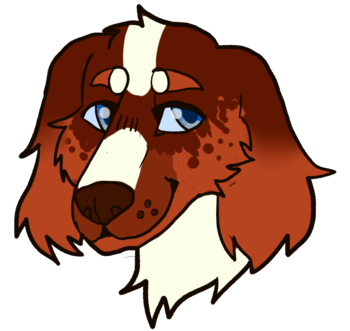 Kestrel is a young adult Irish Setter hybrid that's attempting to make a life for themself as a travelling bard/minstrel. They joined Mistfell Vale at the end of February 2020, hoping to get better shelter and to start settling down finally, but only the wind knows if they will actually stay.

Kestrel is genderfluid and uses they/them pronouns. Unless told otherwise, however, your character will most likely default to she/her, as for the most part Kestrel presents as female. 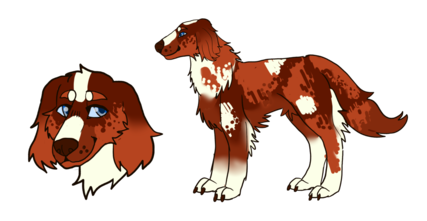 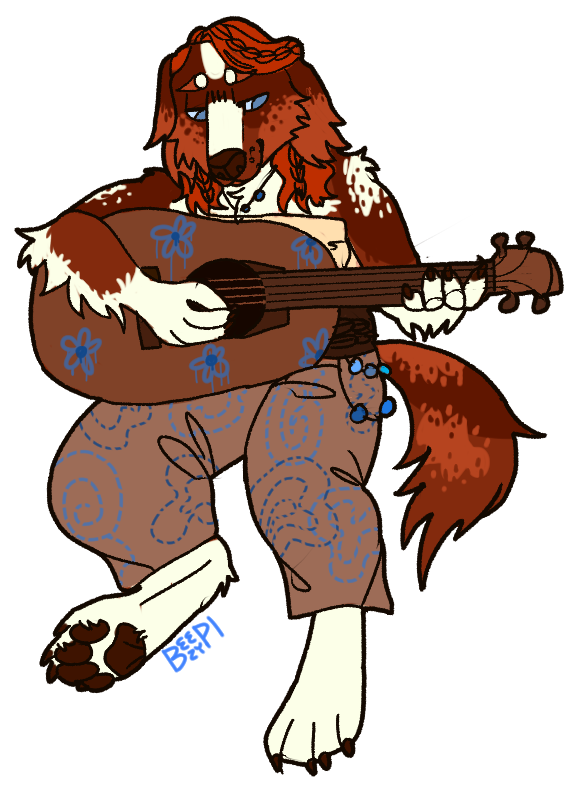 Bright and happy like a fiercely burning flame, at least outwardly, Kestrel hides a darker past behind innocent-looking eyes. They are charismatic and well-liked; whether this is a natural trait or something they picked up from their travels is unknown. They seem to be extroverted, comfortable around people and comfortable with talking as much as they’re allowed to, but the subtle ways they shrink back around unfavorable characters and how their eyes dart around in well-concealed fear are noticeable to the observant. Kestrel thrives in the spotlight but never seems comfortable enough to become close with others or to really stay in one place for too long. Maybe they’re hiding from something, or afraid of commitment. That being said, the mutt has a wild streak of morals and will act out against things they deem improper without hesitation, even at the cost of their own safety. They often talk about wanting everyone to live happily ever-after.

Kestrel is fond of nature and its beauties and is very spiritual. They often prefer spending time out in the wild rather than in any sort of Luperci civilization but their natural social tendencies draw them back to other people anyway. They dislike pointless violence and killing and will only resort to it if necessary, like for protection or hunting for food.

Although not particularly religious one way or another, they are highly spiritual and practice a sort of animism. All things have a spirit that may or may not be sentient and all things are influenced by that spirit. They believe in the spirits of plants and inanimate objects and try their best to commune with them by speaking to them. They don't typically expect any sort of response back but it's comforting to know that things are always there to protect them.

Kestrel was born the illegitimate child of a man and his one-night stand. Star-crossed as it may seem, the pair were on two opposing sides of territorial disputes in neighboring packs. Both packs were large and formidable and both were fighting for their "rightful" claim to land, which ended in many bloody skirmishes on borders. Kestrel was forced into their mother's pack as their father would take no responsibility for his actions; their mother wasn’t much better. The pack shunned the pup, it was a highly religious group and having a bastard child was shameful. Kestrel bore witness to many bloodied pack mates growing up as the tension between the packs inched towards an all-out war.

Kestrel’s pack became smaller and more desperate by the time the pup had reached 6 months of age. The leader of the pack was a known tyrant and had begun forcing the children into battle training as soon as they could shift. Distraught by the thought of harming another being and seeing the results of what fighting did, they frequently tried to rebel against the system but were struck down every time. They did become proficient with knives through force, mostly against their will.

When Kestrel was around 10 months old they ran away from home, following the tracks of a traveling band of entertainers that had passed through the area. Upon learning the young dog’s story, the group, known as the Magpie Consort, took them in. It was a band of misfits and outcasts, much like Kestrel themself, and they began to feel at home with these characters. They travelled with the Consort for many months, learning tools of the trade, winding up from the plains of the Midwestern United States up to the north, crossing the border into Canada. Kestrel was taught how to play instruments, how to read music and to sing, how to thrive out in the wilderness, how to brave life on the road. They were never taught how to read and write but they can play a mean pan flute.

Eventually Kestrel left the group they had called family for months, itching to strike out on their own. If they ever come across the Consort again, they vowed to reunite with their friends and mentors, but for now they are traveling east, searching for a place to call their own. They offer their gifts of entertainment for food and trade.

Although happy with themself at least outwardly, Kestrel is still plagued by brutish nightmares from their childhood, plagued with scars criss-crossing underneath their fur and in their mind. They learned from a young age to not give trust blindly and that no one is a friend unless proven otherwise...